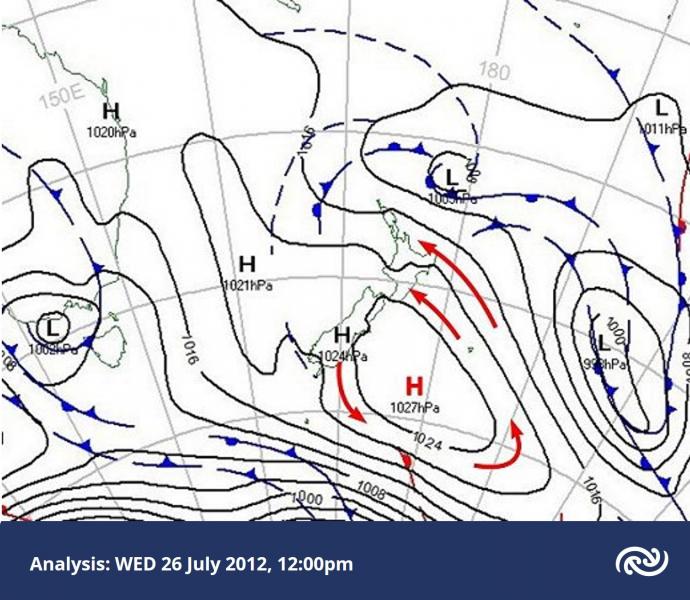 As explained in the post on the effect of resolution, the visible satellite image shows all cloud as white or light grey, regardless of how high or low the cloud is. Most of the cloud over New Zealand is on the east coast of the North Island. Just off the Manawatu coast there is a plume-shaped area of cloud that extends northwestwards parallel to the flow. This is low-level cloud in a region where the air flow near the Earth’s surface is coming together, or converging. As the air convergences it is forced to rise and, with enough moisture, cloud forms.

There is a similar process occurring off eastern Bay of Plenty. In this case there is a zone of more concentrated convergence that shapes the clouds into a rope-like appearance, but the orientation of it is still towards the northwest and parallel to the flow. Most of the South Island is cloud-free, but there is a patch of grey-looking cloud around Lakes Tekapo and Pukaki. This is also low cloud, but it has formed during the night in the valleys and basins. In the afternoon there’s been just enough heat from the weak winter sun to break up and disperse the cloud.

The cloud base at Pukaki during the morning was reported as being about 600 metres above the ground - the air temperature had risen from minus 4 overnight to plus 3 by lunchtime. The Terra polar-orbiting satellite has a very high resolution sensor. Terra passed over New Zealand within the period of the previous images, and I’ve reproduced the image below, split into two colour images. 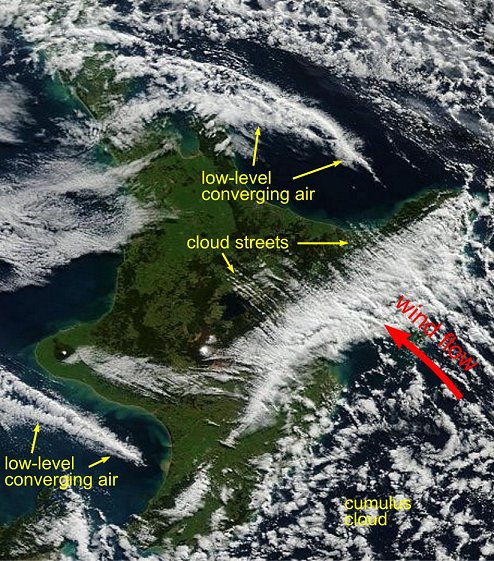 The features discussed above are very apparent. The area of convergence off Manawatu evidently has a double structure, and it is striking how this high resolution image shows individual cumulus clouds as white dots (as discussed in the previous post).

There are cloud streets over the central North Island from the Kaweka to the Raukumara ranges. Over the Pacific ocean there is a lot of cloud having a cellular structure. This is typical of a cold body of air that moves onto relatively warmer water. The air bubbles up into cumulus clouds that tend to clump together into ring-shaped clusters.

The low cloud over Lakes Tekapo and Pukaki (below) has a flat appearance typical of layered stratus cloud. It extends its fingers into the valleys between the peaks of the surrounding ranges. 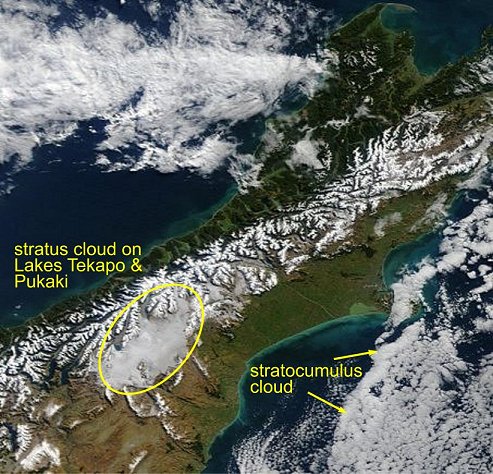