Among the most spectacular of meteorological phenomena are those associated with convection, particularly thunderstorms. Convection is all about the vertical motions that I mentioned in an earlier blog post, but confined to pockets or cells of strong up and down motion. These motions transfer heat through layers of the atmosphere on a local scale; this is why many showers and thunderstorms affect only small areas. But when the temperature differences are large, these storms can be very powerful. Below is a dramatic photo of a convection-related cloud that occurred during May 2010 in Horowhenua - a roll cloud. 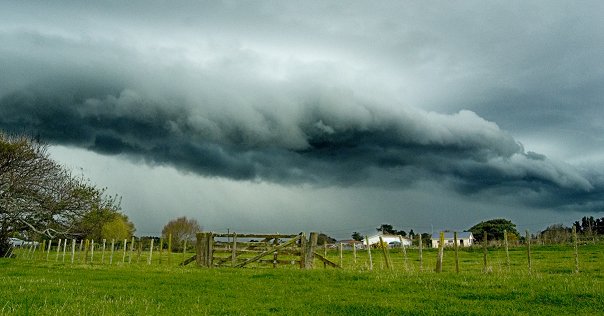 The roll cloud occurred ahead of a strong convective downdraught associated with a heavy shower in the background of the photo. As the downdraught reached the ground it spread out and, at the leading edge, a band of turbulent ascent and cloud formed. This example of convection was very short-lived and affected only a small area. As I stated in my previous  blog post, thunderstorms are of particular interest to pilots because of the many hazards associated with them, such as turbulence (bumpiness), airframe ice, lightning and hail. The movie "Twister" showed some spectacular examples of convection, including tornadoes and funnel clouds that accompany the most severe forms of convection. Many of these powerful storms occur in the United States but we do get a few in NZ from time to time - you can keep an eye out for them using the Severe Thunderstorm link on  www.metservice.com. If you watched the movie at a cinema, perhaps you were munching popcorn at the time. There's a neat analogy between making popcorn and the development of convection that I thought I'd describe ... To make popcorn you need to put the popping corn onto a hot surface, then eventually the ears of corn will explode and puff out. A question: could you predict which piece of corn will explode first and when?

I doubt it ... the only accurate prediction you could make is that they will generally start to explode once the surface reaches a certain temperature. And if the surface of the pan isn't heated, there's no chance of any popping. In a similar way, when the land is heated it isn't usually possible to predict precisely where a cell of convection will form. But we are able to diagnose those situations most likely to initiate convection, and also the possibility of severe convection. So trying to determine where a cell of convection will start is difficult or impossible. In stable situations, if we know that there won't be any significant heating of the land (analogous to not heating the pan), then there won't be any convection, or not much anyway. Forecasting convection in the atmosphere is more complicated than just knowing where surface heating will occur, because you also have to assess things like:

But I hope you get the basic idea. However all is not lost in terms of prediction ... once a cell of convection has formed it is sometimes possible to estimate its future movement and development. And this is where our growing network of weather radars is increasingly valuable, as the radars send us information about convection in its initial stages, allowing useful short-term predictions to be made.