The World Meteorological Organization (WMO) sets recommended practices for coding and reporting weather observations and forecasts. For aviation reports, these codes are set in consultation with the International Civil Aviation Organization (ICAO).

One of the bits of information that is coded up and distributed to the aviation community is what is called present weather. There are many types, including precipitation that falls from the sky, and obscuration due to particles suspended in the air. You can check out the details here (section 4.4  - note this is a large pdf file).

When one of these present weather types occurs it is reported in the interests of safe flying. The recognised types include the following: DZ, RA, SN, GS, GR, TS, HZ, BR, FG, FU, DU, SQ, FC. See if you can guess what the codes stand for -  I have written the answers further down your screen. In a few cases a knowledge of European languages will help.  :-) Last week's weather in New Zealand was full of variety. We had a taste of many different types of weather in a short period of time.

The most common types of weather last week were rain and drizzle resulting from fronts crossing and/or moist onshore flows. These types were experienced in many places with varying intensity. On Tuesday a very unstable atmosphere generated active thunderstorms with hail stones over south and mid Canterbury. There were also occurrences of smaller hail - by small I mean less than the size of a pea. 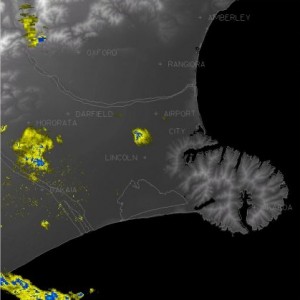 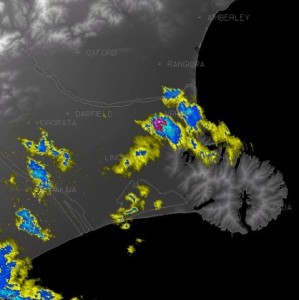 As previous image, but 45 minutes later. A hail shower is shown as red over the western side of the city.

Another less common type of precipitation (in populated areas at least) was snow, which fell to low levels in southern Hawkes Bay, Wairarapa, and the eastern hills of Wellington on Thursday. This came about from a moist flow at upper levels of the troposphere (the part of the atmosphere that contains our weather) sliding over an unusually cold layer of air near the ground.

A common way that the air is obscured in NZ is with fog and mist, especially at night and in the morning due to night-time cooling in anticyclonic conditions (see my blog post on late frosts for a description of the typical conditions for fog as well as frost). Haze is also common when the wind blows in from the sea. Tiny particles of sea salt get caught up in the air, dry out, then get blown onto the land.

The effect is most noticeable in anticyclones when a temperature inversion concentrates the haziness in the air near the ground. You can read more about the effect of inversions in Erick Brenstrum's blog post about ridge-top winds. Smoke is a variation, occasionally occurring in our big cities due to vehicle emissions and open fires. Much less common here is widespread dust, as occurred late in the week over upper parts of North Island, in particular, when fine red dust from Australia was blown across the Tasman Sea.

There were several periods of showers and thunderstorms over western parts of North and South Island through the week. Some of these were accompanied by squalls as the heavy showers induced downdrafts that hit the ground and spread out as strong wind gusts.

The satellite image below shows the extent of the cloud covering NZ as the week neared its end - a rain-band over central and southern regions extends into a swirl marking a depression in the middle-west of the picture. Shower cloud affects most northern regions, and there were lightning strikes over the northwest of North Island at about this time. Interestingly, do you notice the shadow effects due to the low morning sun shining from the east? 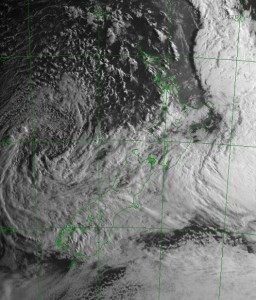 Last week our trainee meteorologists completed a practical test when we simulated the work of our forecast room based on real-time weather as it unfolded. What a week it was, with such a variety of challenging weather types to diagnose and predict. Of the types I listed above, we had them all somewhere around the country. All except a funnel cloud, that is. But even that could have happened given that funnel clouds often go unreported or aren't close enough to our current weather radar network to be detected. Here are the present weather codes referred to above: