In the English language we have many words in common usage that have related but more specific meanings in a scientific and mathematical context. The key word of this blog post, “convergence”, is a good example of this. We sometimes hear of people’s views on some matter initially disagreeing and then, later, coming together or “converging”. In fluid dynamics we’re often interested in regions where different air flows come together. We call this type of flow convergence, and say that the air is converging.

This is an important concept in meteorology because convergence often has a big effect on weather conditions, driving where the cloud is (or isn’t). Sometimes, in suitable conditions, it leads to heavy showers and thunderstorms.
Let’s take a closer look at convergence. In its purest form, air that’s coming together would look like the graphic below, where the arrows show how the air is moving. Everywhere in this graphic the air flow is converging. 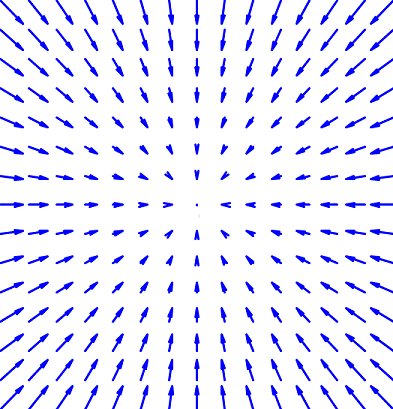 A field of pure convergence.

For example, in the centre where the arrows are all pointing inwards, the air flow is clearly coming together. More subtly, if you’ve got a good spatial imagination you might be able to spot another kind of convergence. Run your eyes along one of the radial lines coming in towards the centre. A longer arrow indicates stronger wind. Even when there’s no change in direction, at each point along the radial the flow is convergent because there’s more air flowing in than flowing out. That is, convergence can be caused by speed effects as well as directional effects. Send a comment to us if you would like this explained further :-)

The opposite of convergence is divergence. In air flows aloft (in the upper atmosphere), meteorologists are often interested in upper divergence because it draws air upwards from underneath. Such regions usually have a big influence on the kinds of weather systems that bring stormy weather to NZ. But that’s another story. Let’s get back to convergence. But firstly, a description of sea breezes.

Sea breezes
A sea breeze is an onshore breeze that develops on warm days, then dies away again in the evening. As the day warms up, the sun heats the land. The land in turn heats the air in the lowest layers of the atmosphere, causing it to expand and rise. This creates an area of relatively low pressure on the land, and relatively high pressure higher up in the atmosphere. Over the sea, we do not get the same effect. This is because water has a high heat capacity, meaning it does not warm up so easily. The result of this pressure difference is a sea breeze, flowing from high pressure to low pressure, as depicted in the diagram below. The diagram also shows that there will be an offshore wind higher up in the atmosphere, completing the circulation.

We get the opposite effect at night (called a land breeze, or katabatic wind) as the land cools much more quickly on cloudless nights than the sea.

Around Northland and Auckland, we can have these sea breezes occurring along the entire coastline, both west and east coasts. Because the land mass separating these coastal regions is quite narrow, convergence occurs when sea breezes coming from opposite directions meet, as in the picture below. Note that this is just an example - sea breeze convergence happens in many places around New Zealand (can you think of some other areas where this might happen?) 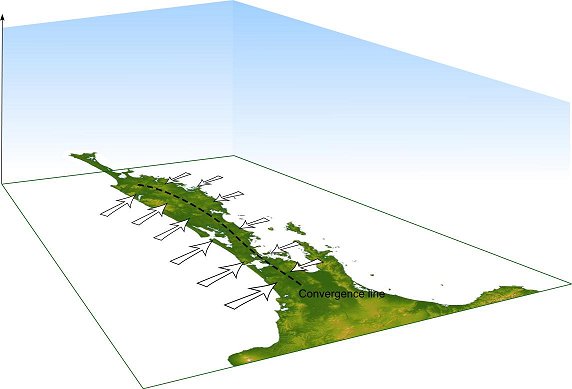 Converging sea breezes on a clear summer day over Northland and Auckland.

Where the air comes together, it has to go somewhere. In the atmosphere, when air converges at low-levels, it gets pushed upwards. Provided that there’s enough moisture in the air, the uplift will generate cloud and potentially precipitation too. If the air is unstable (see Predictability & popcorn) the convergence can generate convection in the form of cumuliform cloud and showers, and sometimes even thunderstorms. 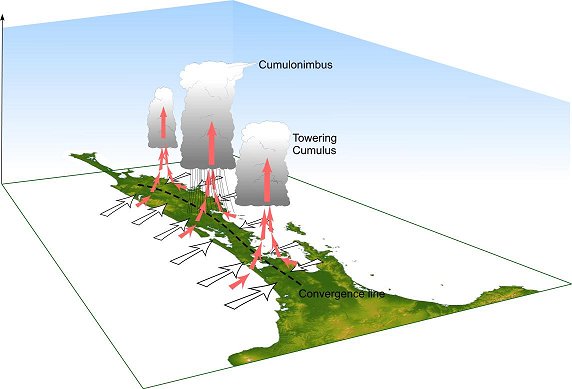 As for previous figure, with the effect of rising air included.

Here’s a good example from 31 January 2012. The animation of satellite imagery below shows the distribution of cloud from mid-morning till early evening that day. As the sea breezes developed and came together, a very prominent line of cloud formed along the middle of Northland and the Auckland isthmus.

Other types of convergence

There are other ways that air can come together in the atmosphere.  The earlier post on Cloud Structures over NZ on 26 July showed the effect of air that was channeled by the topography. Air was flowing westwards through Cook Strait and the Manawatu Gorge area. As the low-level flow spread out downstream, a line of convergence was created where the air came together over the sea west of Manawatu. A similar effect generated a line of convergence over Bay of Plenty. Convergence also occurs on bigger scales. The chart below shows typical low-level wind flows over the southwest Pacific during summer. Where the Trade winds come together there’s a zone of convergence called the Inter Tropical Convergence Zone (ITCZ).  A secondary zone of convergence runs from near Vanuatu east-southeastwards through the Cook Islands, and is called the South Pacific Convergence Zone (SPCZ). 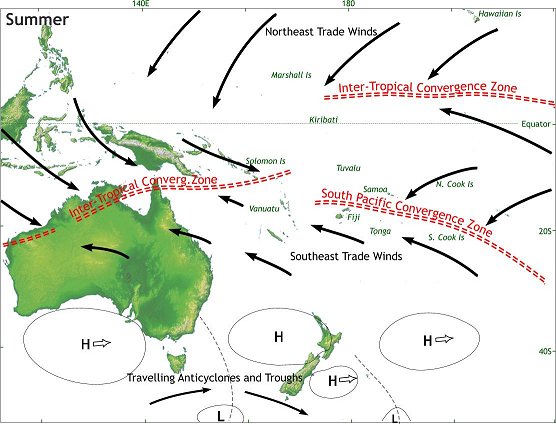 Typical low-level flows over the southwest Pacific during summer.

Both of these zones are associated with increased cloudiness and showers of varying intensity, depending on the state of activity of the zone at any time. The positions of the zones shift around too in response to various influences. As we approach the summer months, Tropical Cyclones form over the southwest Pacific Ocean from disturbances associated with tropical convergence zones. The inward flow in depressions causes convergence and lifting of air over a wide area above depressions. As stated above, rising air favours cloud and precipitation. This is why depressions (Lows) are generally associated with cloudy and often rainy or showery weather.

At the beginning of this post I referred to how convergence drives where cloud is and isn't. A nice example of the latter comes with the sea-breeze. Over the sea where the air starts flowing towards land, the low-level air is divergent. This drives the air aloft downwards towards the water, and creates generally cloud free conditions. A useful tip if you're an aircraft pilot wanting to avoid cloud on a cross-country flight in the vicinity of a coastline. I hope you can see why meteorologists are interested in where and when convergence occurs!