How often have you gone to sleep on a calm night under clear skies, only to wake up and find the whole valley is full of fog?  This makes for great photos if you live above the cloud, as shown below from January 28th 2017 in Crofton Downs, Wellington, but it’s not so nice for the people living beneath the cloud.  Often the top of the fog is a smooth, flat surface, and is due to an ‘inversion’.  In this blog post we unravel what an inversion is, and why it leads to valley fog like this. 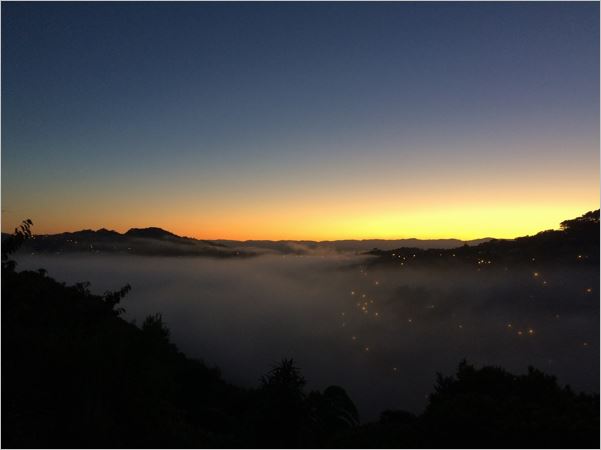 Valley fog under an inversion, viewed from Crofton Downs, Wellington 28/2/17

What is an inversion?

Inversions in meteorology have the same meaning as in common usage, that is ‘flipped upside down’.  In meteorology we are specifically talking about a temperature inversion.  For the first 10 to 15 kilometres of the atmosphere the temperature normally decreases with height, up to a point called the tropopause.  From there upwards the temperature normally increases, and we are in the stratosphere.  The atmosphere below the tropopause is known as the troposphere, and that is where most of the weather happens.  For more on atmospheric levels, see this blog. 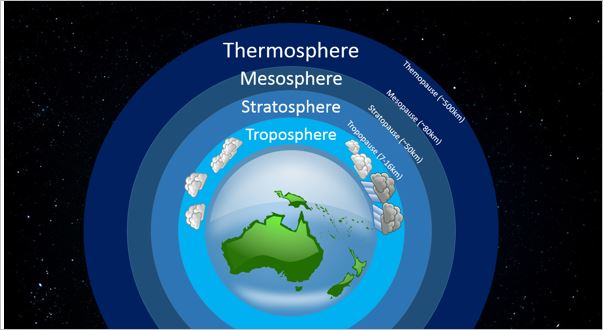 Image showing the different layers of the atmosphere (not to scale)

Any point in the troposphere where the temperature increases with height – as opposed to decreases, which is normal – is called an inversion.  These inversions are normally quite localised, until you get to the tropopause, with is the biggest inversion in the atmosphere.  The picture below shows air temperature data collected from a weather balloon at 1am on Tuesday 28th of February 2017.  Three inversions are visible, one right at the surface, one around 3km up and the tropopause around 12km up.  The second image shows a close-up of the lowest 1000 metres, showing the surface inversion in more detail. 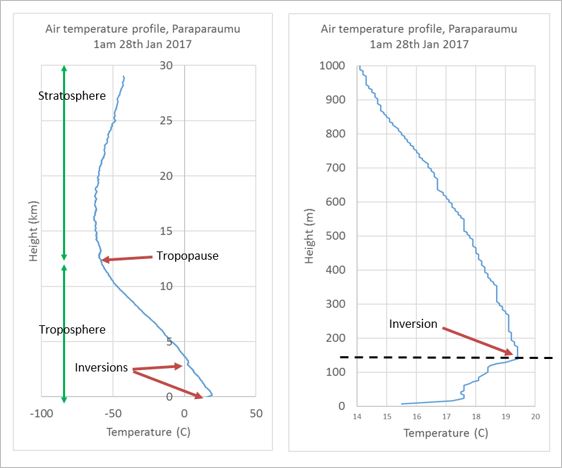 Weather balloon temperature traces from 1am 28/2/17

How do inversions form?
If you hold something full of air underwater – a rubber duck in the bath for example – it pops back up to the surface.  That is because it is less dense than the water around it, and gravity pushes the water down causing the duck to pop up.  Air can be like that.  Warm air is less dense than cold air (the extra heat allows the molecules to fly apart a bit further), which means a bubble of warmer air surrounded by cooler air will want to rise. This is how hot air balloons work.

During the day, the ground absorbs heat from the sun by radiation, and heats the air next to it by conduction.  This causes bubbles of warmer air near the surface, which rise up in a process called convection.  This leads to showers and thunderstorms, as discussed in this blog on convection. On a clear, calm night the ground cools faster than the air, and subsequently cools the air closest to it.  This means that cooler air is underneath warmer air, which is an inversion.

Inversions can form in other ways.  One common mechanism is the advection, or movement, of colder air in underneath warmer air.  This happens when a cold front passes through.  The tropopause is also another form of inversion.

What do inversions do?

As cooler air is unable to rise through warmer air, air trapped under an inversion is very stable.  It can fill the surrounding topography – such as valleys – like still water in a bowl.  If the air continues to cool to its dew point, the water vapour in the air will condense and fog will form in the valley.

Inversions act as a cap, and can lead to strong winds in the mountains.  If there are strong winds and an inversion is near the top of the mountains, the air cannot rise over the peaks and so is squeezed through the smaller gaps and valleys.  When air is squeezed into a smaller space it must travel faster, so local wind speeds can be much higher than away from the mountains.  This can also cause issues for aeroplanes on take-off and landing, as wind speeds can suddenly change as they break through the inversion, causing a change of lift.  You may experience this yourself if you feel a jolt when flying into or out of a thick, flat deck of cloud. 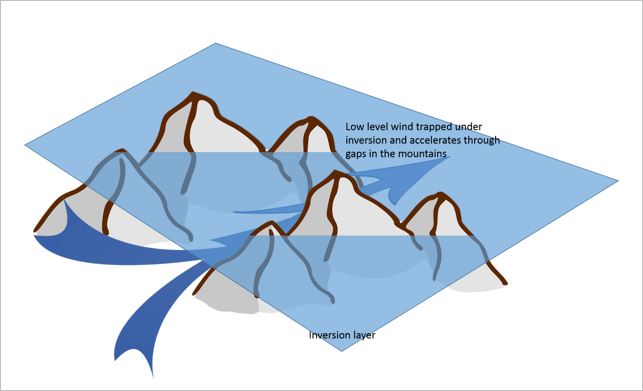 Very low inversions also make sound travel further. You may have noticed that outdoors noise travels further in winter than in summer, particularly on a cool morning.  This is because sound moving upwards reaches warmer, less dense air, which refracts it back down towards the surface so it can be heard further away.   When the surface air is warm, then the sound is refracted away from the surface so gets lost more quickly.

Sound is refracted back towards the ground under an inversion, allowing people on the ground to hear sound from further away