Clouds come in many different types and are characterised and named according to both their shape and height in the atmosphere.  While a single snapshot in time at a given location may only contain one type of cloud, there are many days when multiple cloud types can be observed in the sky at once. The satellite images below is a nice example of different cloud types sitting at different levels above Waikato. Here's what the satellite image looked like Saturday afternoon 3 July 2010, for southwestern parts of Waikato near Kawhia Harbour: 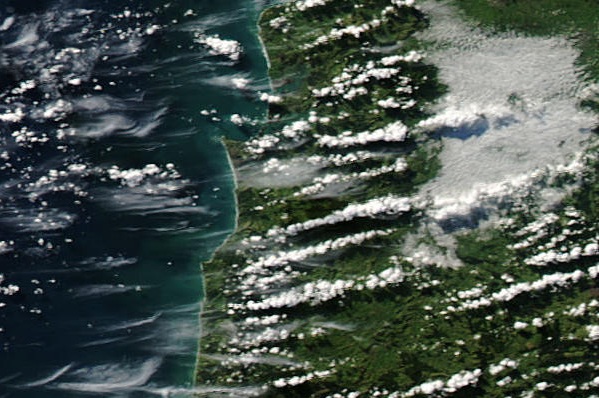 Looking at that image you can probably spot three different cloud types quite easily. The broad, flat-looking cloud near the top right of the image is an area of fog sitting on the ground. Above this, and casting shadows on the fog layer, are lines or "streets" of puffy looking cumulus cloud. Higher still are thin wisps of cirrus both over the sea and extending onto the land, some of which you can see through to the cumulus and coastline below.

To see how these clouds changed during the afternoon, here's a short animation of hourly images covering the period from midday to 3pm:

You should be able to spot the area of fog slowly shrinking, while cumulus forms near the coast in warm updrafts over the land eventually spreading inland across Waikato as streets of cloud.  The lower quality of this animation makes the small wisps of cirrus hard to spot. So how do these cloud streets form? One might be tempted to compare each individual cloud street to a smoking chimney, and that is perhaps partially true. The cloud continuously forms at a stationary point, over a coastal hill for example (acting like a chimney), and is then blown away by the wind - a southwesterly in this case. However, this doesn't completely explain the situation as you might expect the cloud to form all the way along the coast, and then move inland as a solid layer, not as lines of cloud with gaps between them. The answer is clearly a little more complicated and is best illustrated by the following image: 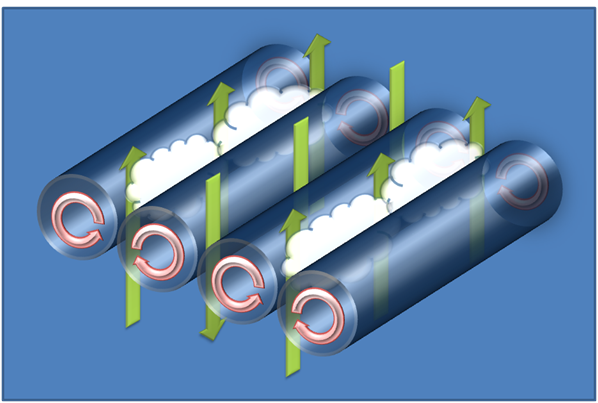 Clouds form when rising air cools and reaches its saturation point, causing the moisture in the air to condense into water drops. Here we see lines of rising air or updrafts between counter-rotating tubes or rolls of air that are aligned with the flow. In between the updrafts are lines of sinking air in which cloud can't form. The result is narrow lines of cloud, separated by narrow lines of cloud-free air. Note that this is quite a different process to lines of cloud that are often observed downstream and parallel to a mountain range and perpendicular to the wind flow.