The Wellington Volcanic Ash Advisory Centre (VAAC), operated by MetService on behalf of the New Zealand Civil Aviation Authority, is one of nine VAACs that operate under the International Airways Volcano Watch. Wellington VAAC is supported through the collaborative effort of MetService, GNS, Airways New Zealand and aircraft operators.

For more information about the overall system, see Bob McDavitt's blog of 21 April 2010. ICAO, the International Civil Aviation Organization, coordinates the International Airways Volcano Watch. The function of each of its nine centres is to respond to reports of volcanic ash within their region and provide forecasts to the aviation community of ash cloud extent and movement. Observations may come from ground stations and volcano observatories, aircraft in flight or orbiting satellites.

To quote from a media release from the Civil Aviation Authority on Saturday 11 June, "The Cordón Caulle eruption began on 04 June 2011 with the initial ash plume reaching above 50,000ft. Volcanic ash particles come in a range of sizes and while the biggest will fall to the ground quickly, very small particles take a long time to settle out of the atmosphere. This eruption ejected these small particles very high into the atmosphere, where strong winds have carried them great distances to the east."

MetService is monitoring, and forecasting the position of, the plume of very small ash particles from the Cordón Caulle eruption which are high in the Earth's troposphere.

Below is a visible satellite image for 11:00am Sunday 12 June 2011. The volcanic ash cloud can be seen, but it's not altogether clear where it begins and ends. And visible imagery is only available during local daytime. 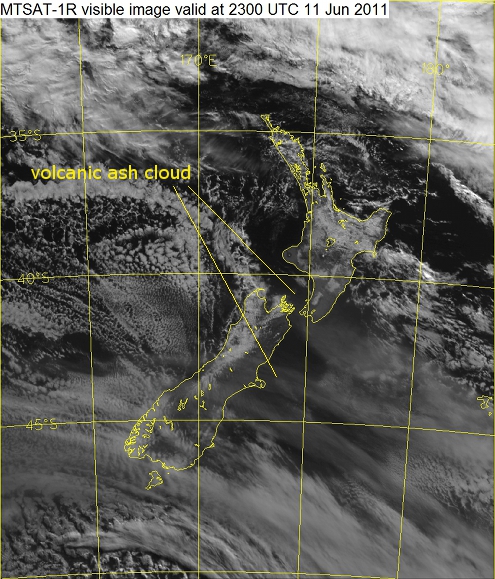 Now here's an image, for the same time, "tuned" for volcanic ash. The ash cloud stands out much more clearly: it's shaded purple and blue. This image has been made from several others, exploiting the particular characteristics of the ash cloud. But even this "tuned" imagery does not provide conclusive evidence of the presence or absence of ash, because in low concentrations the satellite sensing instruments "see" right through it. 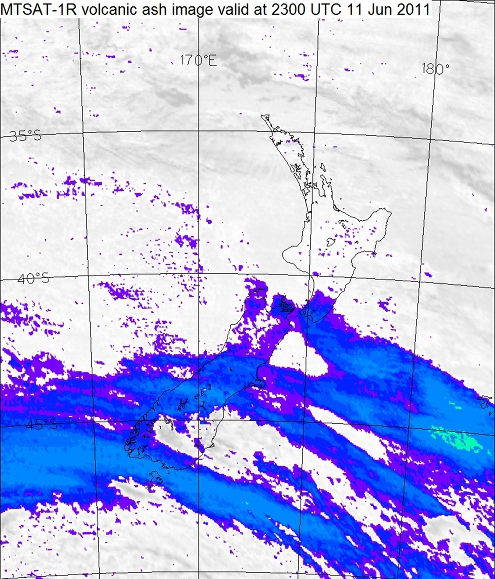 And below is the infra-red satellite image for 11:00am Sunday 12 June. Forearmed with knowledge of the above volcanic ash image, it might be possible to spot the ash cloud. Without such knowledge, there is no way of determining, from this type of imagery, what is volcanic ash and what isn't. 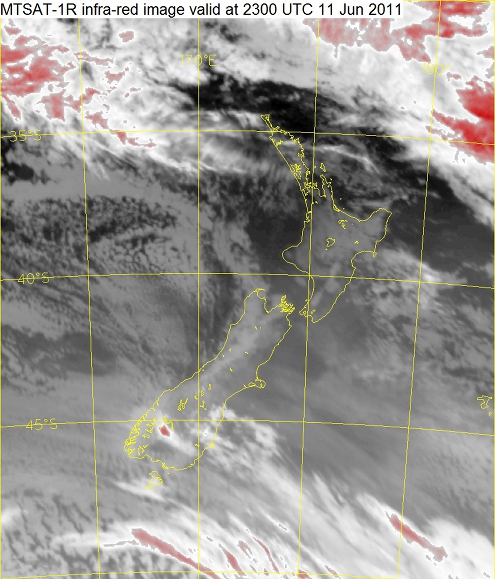 Pilot reports of volcanic ash are also very useful in the monitoring process. All the reports in the Zealand region over the last few days have been of the ash cloud from a safe distance below it: aircraft are avoiding the ash cloud itself.

We've also had access to LIDAR data from NIWA's Lauder Atmospheric Research Station. This has proven most useful in determining the base and top of the ash cloud.

Forecasting: Plume and Trajectory Modelling
In the case of a volcanic eruption in the New Zealand region, MetService uses a local plume model to forecast future locations of the volcanic ash cloud.

However, because the eruption occurred in Chile, we're employing other tools; for example, we have access to a global plume modelling system. But just as importantly, we're using our knowledge of the ash cloud's current location, the expected winds in the upper atmosphere, and some atmospheric trajectory modelling, to forecast where its "edges" will be at set times in the future. These forecasts are available from the links "text(VAA)" and "graphic (VAG)" on the page http://vaac.metservice.com/wellington.

Winds in the upper troposphere have carried the volcanic ash plume from the Cordón Caulle eruption eastwards from Chile, across the southern Atlantic and Indian Oceans, then across the Great Australian Bight, and across New Zealand's skies. In the Australian region, monitoring and forecasting it is the responsibility of the Darwin Volcanic Ash Advisory Centre operated by the Australian Bureau of Meteorology. MetService and the Australian Bureau of Meteorology are working closely together on determining the depth, height and horizontal extent of the plume.

What ash cloud looks like in the New Zealand sky

Near sunrise and sunset, the sky has a streaky look. The low sun angle illuminates the underside of the ash cloud quite nicely, as can be seen in the photo below. 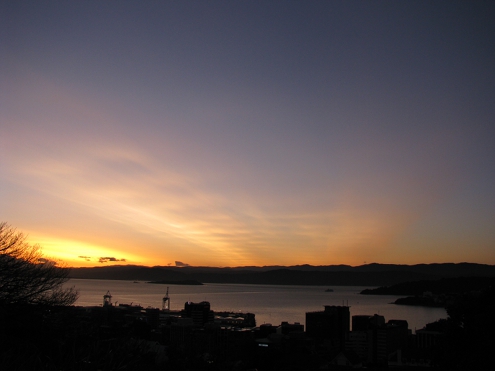 When the sun is higher the ash cloud has a smoother and more subtle appearance, though it still looks streaky. And near the sun, the sky has a yellowish milky look. 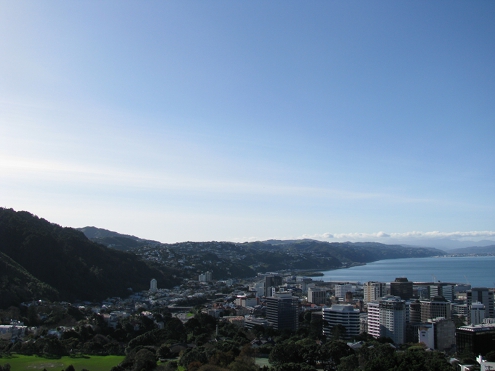 Image copyright Ross Marsden, 2011.
Ash cloud in the Wellington sky, early afternoon of Wednesday 15 June 2011. The sun is left of the field of view. Most, if not all, of the "streakiness" in the sky is caused by ash cloud.

Below is a visible satellite image (click here for the image source) made from two "passes" of the MODIS "Aqua" satellite during the afternoon of Wednesday 15 June. Ash cloud can be seen: it is the light grey streaks from northwest Nelson across Wanganui, Manawatu, Hawkes Bay and Wairarapa. 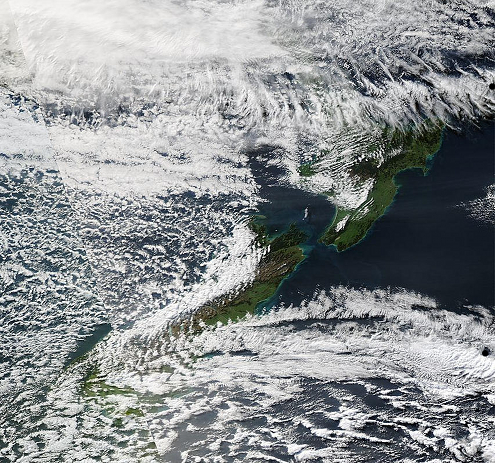 It is important to note that, in the above image, there is other ash cloud that can't be seen. It is masked by the water and ice clouds that cover much of New Zealand.