From Wednesday 01 July 2009, MetService has been providing a Severe Thunderstorm Warning Service. This blog entry explains why we are able to do this, why warnings of thunderstorms are different from warnings of broad-scale weather events, which parts of New Zealand they will apply for, how you can receive them and what actions you can take to protect yourself.

Why does MetService provide a Severe Thunderstorm Warning Service?

Over the six years or so prior to 2009, four important developments at MetService have together made it possible to provide a warning service for localised severe weather:

Below is an example of the difference in scale. Broad-scale heavy rainfall over northern New Zealand (the first image) is of far greater extent than a local severe thunderstorm in coastal Bay of Plenty (the second image, circled). 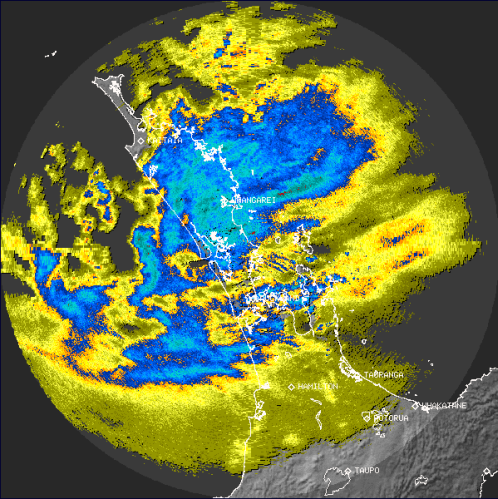 Heavy rainfall over almost all of Northland and parts of Auckland and Coromandel, 7:21am 10 July 2007. Overall, this heavy rainfall event lasted at least a day. According to the Insurance Council of New Zealand, about $60 million in insurance claims resulted from this event. 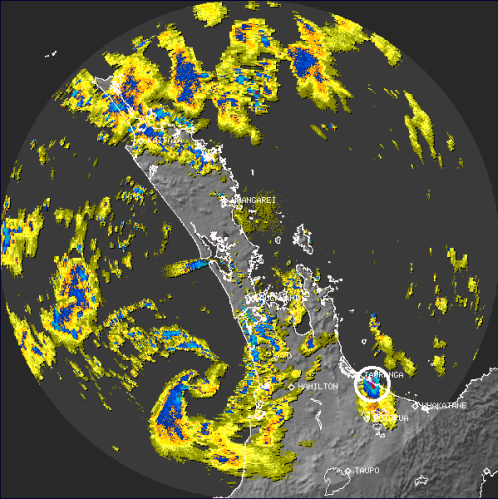 Severe thunderstorm just east of Tauranga, 11:59 am 11 May 2009. This event lasted a few hours altogether, and much less than that in any one location. While there is a lot of echo on the radar scope, the small area near Tauranga is the only place where severe weather is occurring.

A narrow swath of heavy hail affected the Bay of Plenty coast from near Tauranga to near Opotiki. In locations more than about a kilometre from the thunderstorm, severe weather didn't occur.

When do severe thunderstorms occur?

How often do severe thunderstorms occur?

Thunderstorms occur reasonably often in New Zealand. Severe thunderstorms are much less common, occurring perhaps once a month or less. Your chances of experiencing one are fairly small. But if you are under or near one, it is important that you know what to do to try and keep yourself and your property safe.

What can I do with less than 60 minutes’ notice?

Quite a lot. A few simple examples are:

How does MetService detect thunderstorms?

Weather radar is essential for the detection and forecasting of small-scale severe weather events. The amount and quality of data decreases with distance from a weather radar. For these reasons, warnings of severe thunderstorms will only be available within about 150 kilometres of a weather radar.

How many weather radars does MetService have, and where are they?

In the maps below, the bright blue areas are both within 150 km of a weather radar and contain enough weather radar information to provide Severe Thunderstorm Warnings. Siting weather radars in New Zealand is a challenge because hills reduce, or in some cases completely block, the radar signal. This is why, for example, the Canterbury radar provides no coverage of the South Island West Coast.

Who does the warnings?

MetService has a group of very experienced forecasters whose focus is severe weather. Every day, one of the things they do is issue the Severe Weather Outlook and the Severe Thunderstorm Outlook. The Severe Weather Forecasters issue Watches or Warnings when they expect the warning criteria to be met.

How can I receive Severe Thunderstorm Warnings?

Because Severe Thunderstorm Warnings will have short lifetimes, they need to be delivered as quickly as possible. They will be available 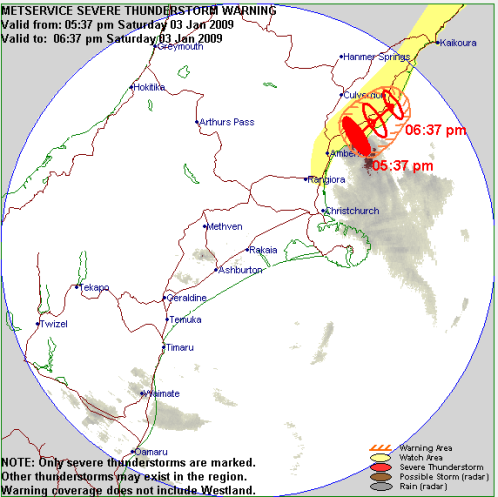 SEVERE THUNDERSTORM WARNING TOP PRIORITY FOR IMMEDIATE BROADCAST Issued by MetService at 5:53 pm Saturday 03 January 2009 Valid until 6:37 pm Saturday 03 January 2009 This warning affects people in the following local government areas: HURUNUI. At 5:37pm, MetService weather radar detected severe thunderstorms near MOTUNAU BEACH, PEGASUS BAY, SCARGILL and GRETA VALLEY. These severe thunderstorms are moving towards the northeast, and are expected to lie near CHEVIOT, DOMETT and BLYTHE VALLEY at 06:07 pm and near CHEVIOT and OFFSHORE HURUNUI at 06:37 pm. These thunderstorms are expected to be accompanied by very heavy rain and large hail. Very heavy rain can cause surface and/or flash flooding about streams, gullies and other low lying areas, as well as make driving conditions extremely hazardous. Large hail can cause significant damage to crops, orchards, vines, glasshouses and vehicles, as well as make driving conditions hazardous. Very heavy rain associated with this storm has been reported earlier from CHRISTCHURCH RADAR BUT THE TREND IS NOW FOR WEAKENING. Large hail associated with this storm has been reported earlier from CHRISTCHURCH RADAR TO AROUND 20MM DIAMETER BUT SIZE IS LIKELY NOW DIMINISHING. A Severe Thunderstorm Watch remains in force for FAR NORTHEASTERN CANTERBURY AND EASTERN PARTS OF MARLBOROUGH UP TO CAPE CAMPBELL. MetService advises that as storms approach people should:

During and after the storm, people should:

This warning is due to be updated or lifted by 06:37 pm Saturday 03 January 2009. NOTE: Only severe thunderstorm tracks are shown in the graphic. Other thunderstorms may exist in the area. MEDIA PLEASE NOTE: This warning will be updated within the next hour or so. MetService would appreciate it being broadcast regularly during this period.

Appendix II: What is a thunderstorm, anyway? 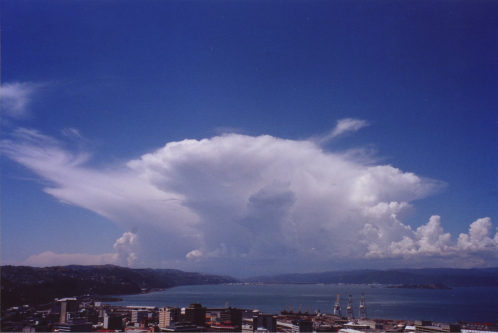 Thunderstorms are the result of strong updraught of air throughout a considerable depth of the atmosphere but over a small area. In New Zealand, thunderstorms tend to be associated with

A Severe Thunderstorm Warning will be issued when one or more of the following is expected: