Weather radars are used all around the world to detect rain, hail and snow, as it happens. However, there are times when the radar network can pick up other things as well. While you generally won't see aeroplanes on our radar images (the radar beam is usually beneath the flight path of most flights, and also our radars are calibrated to primarily pick up smaller objects, whereas radars at airports are calibrated differently to primarily pick up aeroplane-sized objects), there is a myriad of other things that can cause interference on our radar images, which I will explain in this blog.

Firstly, a very brief explanation of how weather radar works. Meteorologists use information from weather radars to track things such as fronts or squall lines, and this can help to improve forecasts. Weather radar works by sending out a microwave signal, which will be reflected back towards the radar dish by any raindrops, or other precipitation. The radar then records the returned signal, and this is used to create the images you see on the MetService website. For a more detailed explanation of how radar works, see this great blog.

While the radar network picks up many things on Earth, it can also pick up signals from the sun! The sun emits radiation in every frequency in the spectrum, including the frequency used by our radars. This means that, when the sun is at the right angle, you can see anomalous echoes on our radar images. This usually occurs at around sunrise (coming from the east) and again at sunset (coming from the west). You will often see a straight line coming from many of the radar locations at once at these times. With the Sun’s interference, it only shows up at rise and set times because it is then at the low elevations monitored by the radar. The Sun interference lines does not appear every day and in every radar. The Sun needs to be at the exact elevation that the radar is scanning at the time. The Sun is “transmitting” continuously, so the radar interprets this as targets at all ranges on that radial. People sometimes mistake these lines for meteor showers.

The images below show lines extending to the east of the Northland and Auckland radars. These straight lines are caused by interference from the sun as it came over the horizon at sunrise. 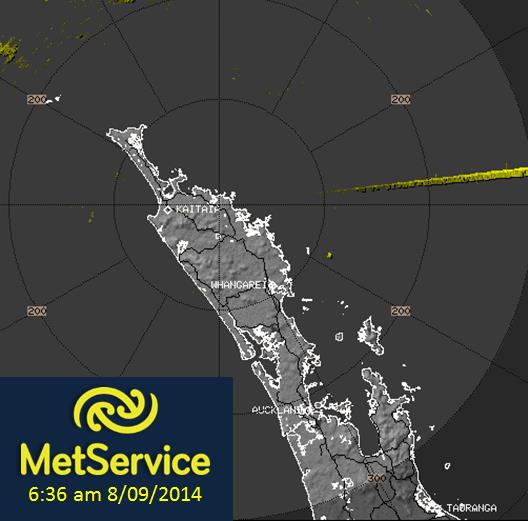 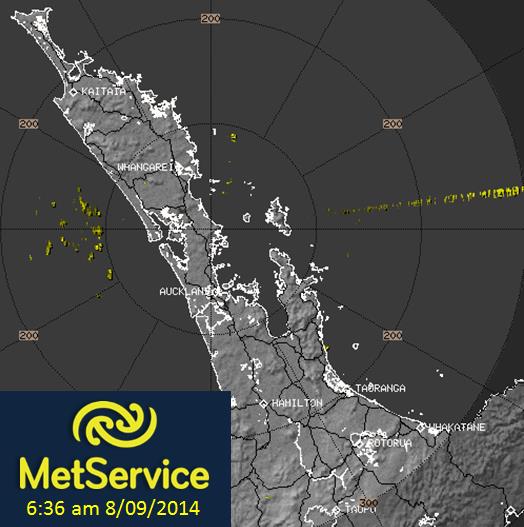 Below is a radar image from the Canterbury weather radar, showing a large area of ‘rain’ over the sea to the northeast of Christchurch. However, when we look at the visible satellite image for a similar time, we see only clear skies. So what is happening in this case? 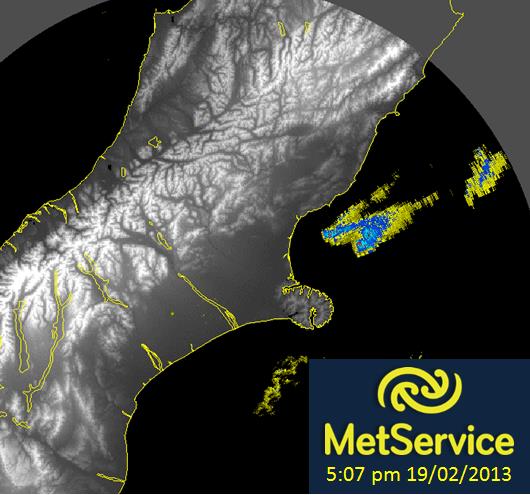 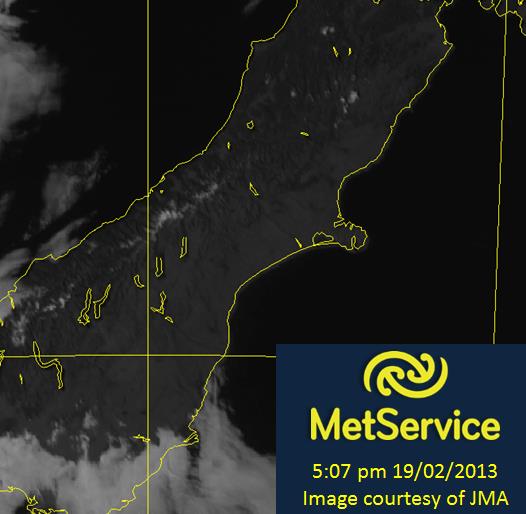 The first image above is ducting on a radar image, while the second image is a visible satellite image(like a photo) taken from a geostationary satellite 36000km away from the surface of the earth.

On the day in question, high pressure was sitting over New Zealand, bringing sunny skies to many. However, high pressure often causes an ‘inversion’ to form. The word ‘inversion’ refers to a layer in the atmosphere where temperatures suddenly increase with height (rather than getting colder with altitude, as is usual). This sudden change in temperature causes a change in the density of the air as well. 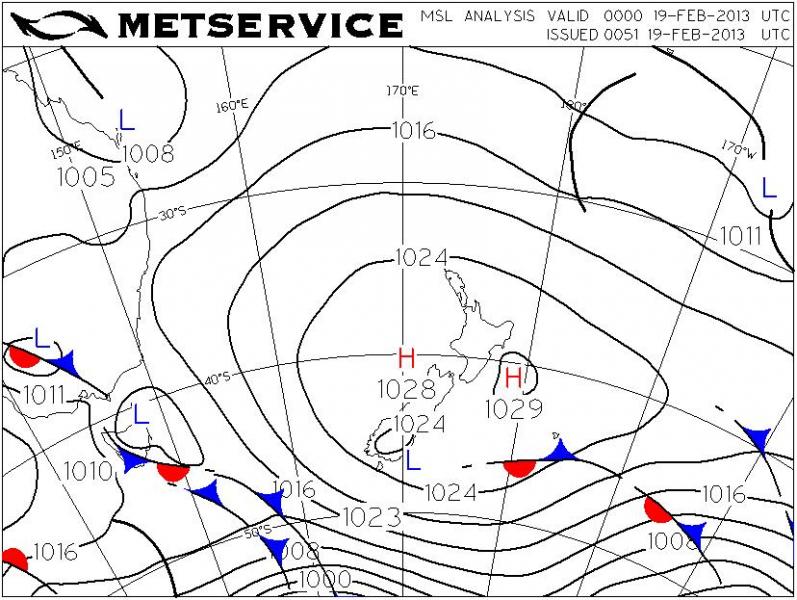 While it may look like clear air to our eyes, this sudden density barrier can actually reflect the radar beam back towards the ground, and then back to the radar. This is called ‘ducting’. Ducting can cause enhanced ground clutter and sea clutter, explained below.

Other times the radar beam can be reflected off of terrain or other objects close to the radar. This is termed ‘ground clutter’. It can make the radar image appear very messy, with large changes in reflectivity over a small area.

This is similar to ground clutter. When winds are very strong, causing the sea surface to be very rough, the rough surface can reflect the radar beam back towards the radar. This can sometimes show as circular echoes around the centre of the radar. Similarly to ground clutter, there are algorithms that can remove a lot of this sea clutter, but again they are not perfect.

The two images below show:

2. The same image, but after a decluttering algorithm has been run. Most of the sea clutter has been removed, but radar echoes from light rain / drizzle remains about the Tararua Ranges. 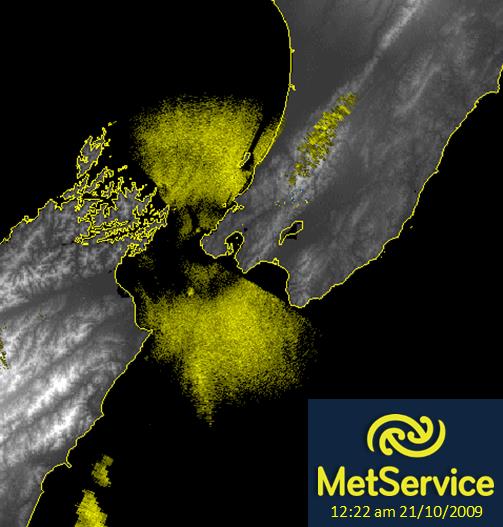 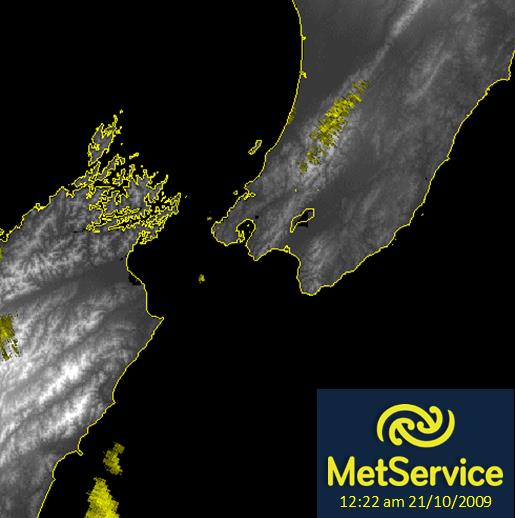 Bugs in the radar?

We have already talked about the radar beam reflecting off of the ground and the sea, and even the air itself. But bugs? The weather radar can sometimes pick up swarms of insects taking off. These echoes can look like patchy areas of ‘light rain’. The image below shows an example of this, and you can read more about this example here. 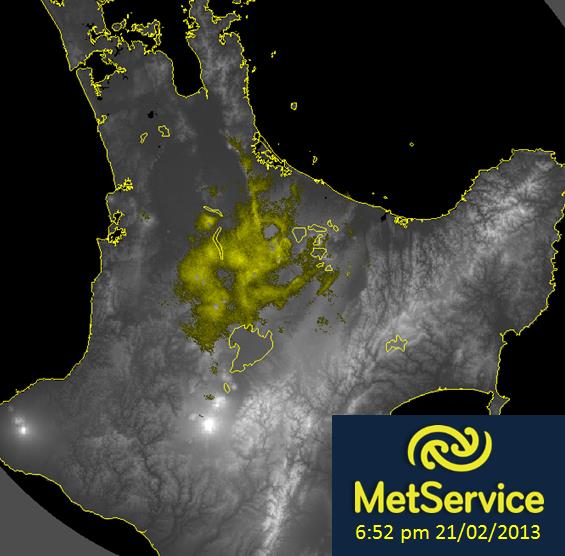 As the clouds move closer to the radar, the raindrops evaporate before they get low enough to be picked up by the radar. An example of this is shown below. You can see a circular boundary around the light rain to the north of Auckland. This virga is actually being picked up at the very edge of the range of the Bay of Plenty radar, while the Auckland radar is not picking it up, creating the sharp boundary. 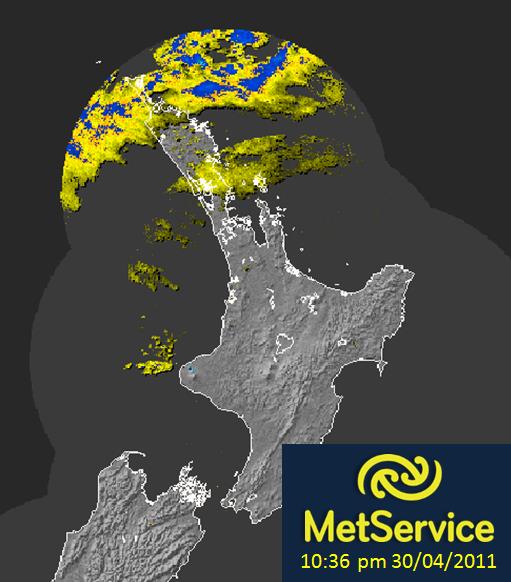 We have already discussed lines on the radar caused by sunrise and sunset. Sometimes, we can see similar lines, but they occur at different times, and can come from any direction.  Below is an example of interference lines showing up in the New Plymouth radar: 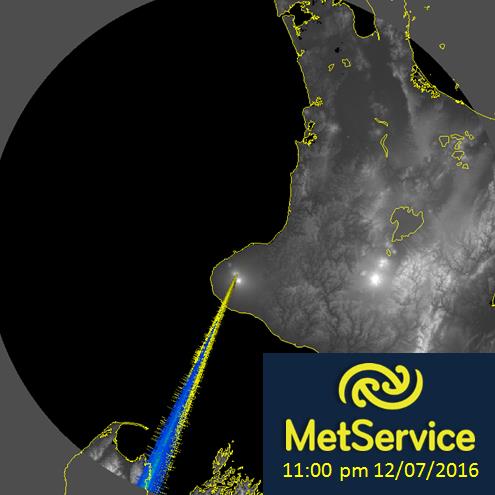 These lines are similar to those caused by the sun, in the sense that our radar is picking up a signal at a frequency within it's range. However, these are generally caused by someone else broadcasting a signal within this range. This kind of interference is similar to the crackling ‘noise’ you hear on your radio sometimes. These other interference lines that are caused by radio transmissions at similar frequency as the radar 5.6GHz (such as incorrectly configured WiFi’s 2.4 GHz - 5 GHz.). Again, as these are transmitting continuously, the radar interprets the received echoes as echoes from all ranges on that radial.

Usually when WiFi’s are initialised in installation, they scan their operating frequency band for other transmissions. When any are found the WiFi marks that frequency as “already in use” and does not use it. Some WiFis do not do this and this can cause interferance with the radar images.

As described above, there are many things that can be picked up by our radar network, other than just rain, hail and snow like you might expect. It takes some skill to be able to pick out which radar echoes are actually showing rain, and which ones are anomalous. Keep an eye out for these patterns in future, and you may be able to explain to your friends why there is a rain signal on the radar, yet the sky outside is clear!