The development of modern radar started in 1886, when German physicist Heinrich Hertz showed that radio waves could be reflected from solid objects. In 1904, another German, Huelsmeyer, was the first to build a simple ship detection device, successfully detecting a ship in dense fog. In the pre-war period (the 1930s), many nations were working on radar devices. A major advance occurred once systems were developed that allowed short ‘pulses’ of radio energy to be generated, allowing the range of the object to be determined by timing the pulses. In addition, the direction of the antennae enabled the angular location of the target. This was the start of the modern-day radar, complete with a ‘fix’ locating the target relative to the antennae. The term RADAR (Radio Detection And Ranging) was coined in 1940 by the United States Signal Corps, as it worked on these systems for the Navy.

Radar development during World War II was rapid, and was likely a key factor contributing to victory by the Allies. The creation of the magnetron (now commonly used in microwave ovens) by the British physicists, drastically reduced the size of the radar sets, so that radar systems could be used on smaller ships and also aircraft. The magnetron also allowed a shorter wavelength and higher pulse power, enabling the detection of smaller targets.

In the seven decades since the first microwave radar was installed in a United States Navy vessel in 1941, marine radar have enabled safer navigation in reduced visibility, and are now commonly used for collision avoidance at sea.

During the war, military radar operators noticed some echoes returned due to weather interference. Techniques were developed to filter out the rain echoes, but scientists duly began to study this effect. Soon after the war, surplus radars were deployed to detect precipitation.

Weather radar has two main types of display. The ‘plan position indicator’ (PPI) is the most common format of radar display. This will be familiar to mariners, since it is also the primary presentation for marine radar data. The radar antenna is represented in the centre of the display. Because a radar beam rises in height the further away from the antenna it is, in the PPI view, the distance from the centre (antenna) and also the height above the ground can be drawn as concentric circles. Figure 1 illustrates a typical PPI view of weather radar from the Westland radar. 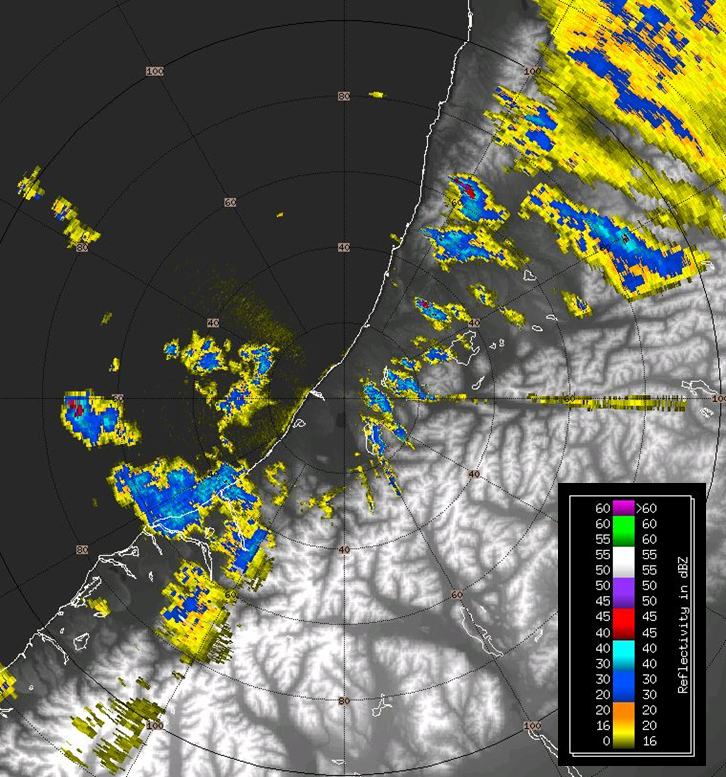 The radar is situated at the centre of the concentric rings. The rings show distance from the radar and are spaced every 20 km. This weather radar image shows precipitation reflectively (units are dbZ). Yellow and blue colours indicate light to moderate showers respectively, while red/purple colours indicate heavier precipitation. Note the heavy shower located almost 75 km due west of the radar and another 65 km to the NNE. Note that because the beam angles up as distance from the radar increases, some lower-level precipitation may not be seen – it quite literally lies ‘under the radar’.

The second type of radar display is the ‘constant altitude plan position indicator’ (better known as CAPPI), which shows a radar display giving a horizontal cross-section of data at constant altitude (height). It was developed to remove the problem of altitude changing with distance from the radar, and also to remove ground (junk) echoes near the radar. An example of CAPPI images removing sea and ground clutter around Cook Strait is shown in Figure 2. 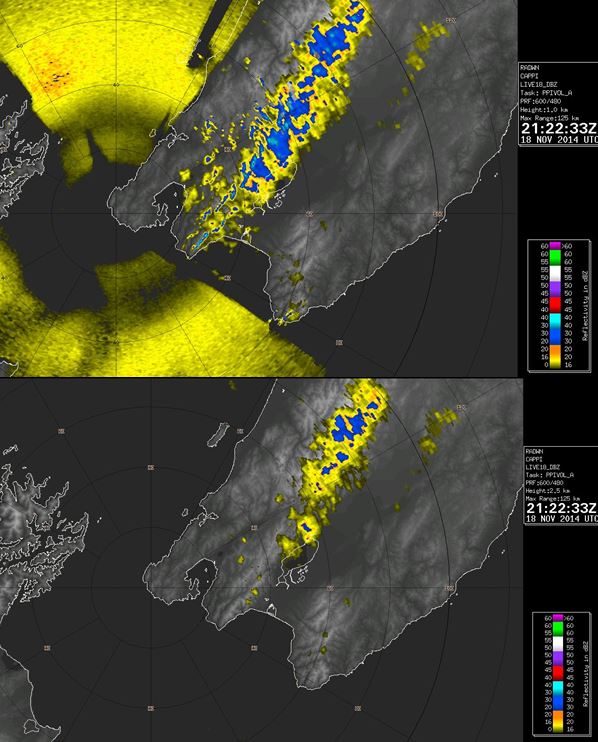 Over the last decade, weather radar technology has advanced enormously, and radar is now used extensively by national weather services all over the world. It is used to track, diagnose and forecast the future position of rain, showers, and thunderstorms. This includes tracking severe weather associated with thunderstorms (lightning, hail, tornadoes, damaging winds). For the New Zealand inshore mariner, weather radar is available straight to your phone on the free MetService Marine App. You can download this for iPhone or Android at your local App store.