On Saturday 16 October 2010, many parts of New Zealand, especially South Island, experienced Foehn winds. During the approach to summer, eastern parts of both islands will get more warm Foehn winds under suitable conditions. In this blog post I'll describe what the Foehn wind is and explain how it comes about. We'll start by looking at temperature reports from weather stations on Saturday 16 Oct 2010. 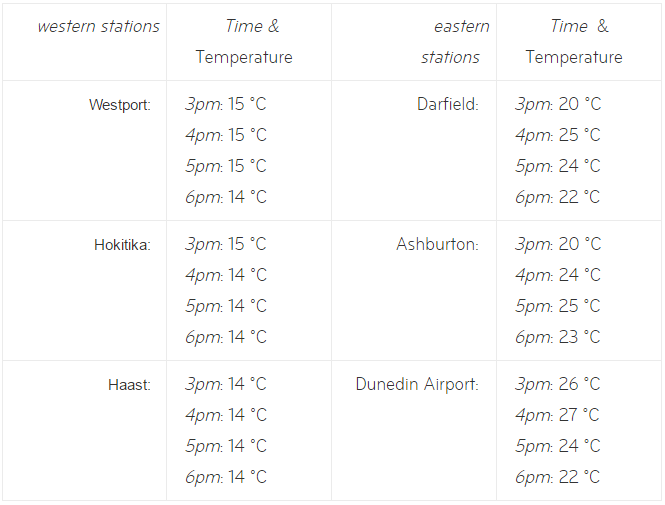 Note the big temperature difference from west to east.  As was explained in the post on Saturation water exists in three phases: liquid, ice and vapour. When a change between any of the phases occurs (for example, when ice melts), energy in the form of latent heat is either released into the surrounding environment or taken from the surrounding environment. The key to the Foehn wind process is this release of latent heat. Now, when a northwesterly airstream flows from the Tasman Sea onto the western sides of hills and mountains of New Zealand, it is forced to rise. 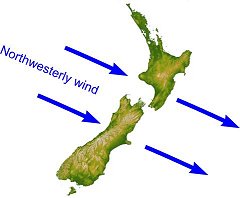 As the air ascends it cools (as mentioned in the post on Ridge-Top winds). If there is enough moisture in the rising air, cloud will form in it. As the water vapour in the air condenses into water droplets (cloud), it releases latent heat. This extra heat then reduces the rate of cooling of the air.

Northwesterlies arriving on NZ’s western coasts are often moist enough to produce not just cloud, but rain. The rain falls where the air has risen and cooled the most; usually, this is west of the main mountain ranges. Because the winds over NZ are most often from the west or thereabouts, western districts are generally wetter than places east of the main divide.

So, when the air advances to the eastern side of the hills or mountains, it is drier because much of the water has been lost from it as rain. As the air sinks now, it warms (the same effect described in the context of  anticyclones) at a faster rate than the earlier cooling – because there’s less water to heat. In other words, the latent heat released in the moist rising air upstream of hills and mountains has a big effect on the dry descending air on the downstream side.

Have a look at the animated diagram below, where an air parcel starts on the west coast at 15 ºC, ascends and cools to 3 ºC at the top of the mountain range, then subsides and warms (faster than it cooled) to 27 ºC on the east coast.

Schematic animation of how air temperature changes in a northwest flow across a mountain range. Note the "lenticular" cloud on the eastern side remains anchored to the mountains.

Once the air reaches the eastern side of the range it has dried out, and the relative humidity can be very low. Your skin might feel dry and irritated as a result, but it's great for drying your washing on the line!

All this is very well, but I have noticed a few situations where there is a Foehn-warming effect without any rainfall on the west coast! How can this be?

The answer lies in the 3-D nature of wind-flow. Sometimes the effect of a mountain barrier is to draw an air-stream aloft down towards the ground on the downwind side, as shown in the diagram below.

How warmer air can occur at low levels on the eastern side of a mountain range without any rainfall on the western side.

In this case, warming still occurs by the same subsidence process and, provided the temperature is high enough aloft (e.g. 3 ºC as in the previous example) it will be warm on the eastern side (27 ºC in the previous example). No rainfall is needed in this process, but rather a mechanism to draw the air downwards - such as an unstable airmass.

Everything I've discussed in this blog post applies quite generally around the world - whenever moist air flows up and over a hill or mountain, the temperature will be higher on the downwind side.

In NZ, the principle also works when the flow is reversed, such as a southeasterly airstream flowing onto Canterbury that crosses the Southern Alps and flows over Westland. But bear in mind that the originating airmass has come from the south so it will be colder everywhere. I've experienced the southeasterly after it's crossed the mountains, and its dryness and gustiness can make it feel uncomfortably cold.