This blog created just prior to spring 2012.

The phrase La Niña was possibly heard a lot during the Summer of 2011-12, going into spring 2012 another similar term is El Niño. We all know that El Niños bring different types of weather to New Zealand compared to La Niñas but what is an El Niño? Does it always mean the same sort of weather for New Zealand? Not necessarily -  The season of 2012-13 might not have the typical sort of El Niño weather. So what is a typical El Niño?

It all boils down to the distribution of warm and cold water across the Pacific Ocean and this has an effect on the way that weather systems develop and move across the Pacific including New Zealand. A typical El Niño pattern would have warmer than usual water across central and eastern parts of the equatorial Pacific. The chart below shows this distribution of warm water (sea-surface temperature in degrees C.). 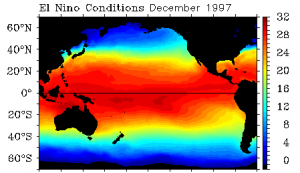 A typical flow pattern in an El Niño would feature an anticyclone just to the northwest of New Zealand and an area of low pressure to the southeast. This in turn would bring enhanced westerlies across New Zealand as shown below. The enhanced westerlies would bring normal to above normal rainfall to western areas and below normal rainfall to eastern areas. Troughs would frequently cross the country in the westerlies, bringing changeable and unsettled weather. 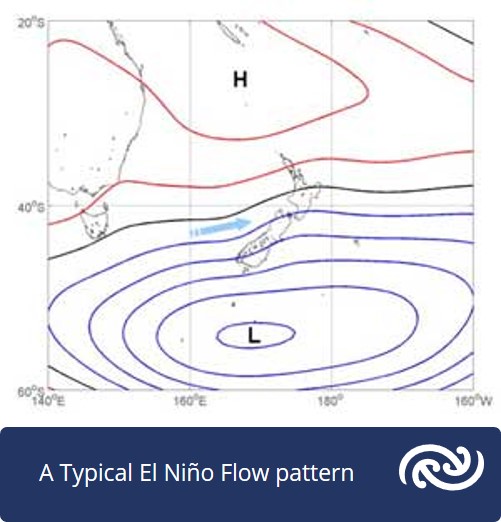 What could be different with an El Niño?

The El Niño for spring 2012 might have been slightly different than the typical El Niño because of some other factors at play. Firstly, there were still hints of the strong La Niña of the previous season (the opposite of El Niño), as well as the neutral phase, in our weather patterns recently. The equatorial sea surface temperatures have continued to warm over the past several weeks. The area of above average sea surface temperatures over the eastern Pacific continues its slow progression to the west.

The subsurface waters of the eastern equatorial Pacific have also showed signs of warming in the weeks prior to spring 2012. Global models at that tome picked the El Niño conditions to develop within the next couple of months. For New Zealand, an El Niño usually means that the disturbed westerly flow of the roaring forties is displaced northwards, but a fair amount of variability can be expected in the shorter term, especially until the intensity of the El Niño is better understood. As a result, the typical wind flows normally associated with El Niño patterns may not occur all the time.

Atmospheric weather patterns have recently been bucking the El Niño trend that has been set by the ocean. The Southern Oscillation index (SOI), which gives a snapshot of the weather patterns between Tahiti and Darwin, has been drifting the other way and ended July slightly above zero. This shows that the atmosphere is currently not following the lead given by the oceans.  This is probably a temporary situation and we are likely to see a drop in the SOI during spring. Back in June we saw a sharp early dive into wintry temperatures fed by southerly winds around anticyclones that lingered near Tasmania - see Chris Webster's blog 'The structure of highs' for more about how highs work.

In July this pattern was replaced by milder air and east to northeast wind flows around anticyclones to the southeast. The weather over the next several weeks may still have some hints of variability before we ease into a more El Niño like pattern in the months to follow. The peak intensity of the El Niño will also then determine the flavour of our weather patterns through the late spring and into summer. However, weather patterns in August and September may not be typical of a late winter/early spring El Niño transition, with temperatures and rainfall likely to be near normal in all regions, except in the north and east where rainfall could be slightly above normal.

You can read more about this in the  seasonal outlook from NIWA: http://www.niwa.co.nz/climate/sco/seasonal-climate-outlook-august-october-2012 In a typical period of transition into El Niño-like weather patterns, there should be enhanced westerly winds - but this may not be the case with this El Niño. Settled periods are expected, with clear sunny days and frosty or foggy mornings associated with passing anticyclones.  Fronts and troughs rolling in from the Tasman Sea may be followed by episodes of cool southwest winds lasting several days across the whole country.  Occasionally a low pressure centre may move onto the country from the north, preceded by an easterly flow with some heavy rain for north-eastern areas.

Keep an eye out for any blocking pattern over the next few weeks (where the weather patterns get stuck - see our blog 'Unusual wind direction'), because anomalies can sometimes occur as a result.

If you'd like to read more about El Niño and the Southern Oscillation, we recommend Erick Brenstrum's 'The New Zealand Weather Book' published by Craig Potton Publishing. Although now out of print, your local bookseller may have copies in-store.