After writing two blog posts about lows or depressions, I thought it would be a good idea to also write something about highs or anticyclones. After all, one is just the opposite of the other, isn't it?? Well, in some ways yes, but there are some important differences too.

Let's list some of the differences between highs and lows.

The wind around a low on a weather map (mid-latitude or tropical low, it doesn't matter which) blows clockwise around its centre in the southern hemisphere. I had to add that last bit about the hemisphere because for our friends in the northern hemisphere the wind blows the other way.

Around a southern anticyclone the wind blows anticlockwise. That's easy to remember in the southern hemisphere :-). 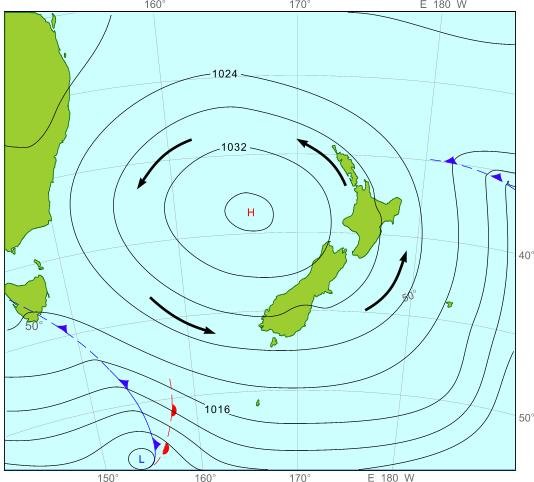 A typical anticyclone moving onto NZ

There are some subtle differences in speed too - check out the post on Year 12 Maths. If an anticyclone is close to you, the wind around you will be gentle.

For a depression this may not be the case although some depressions are weak and the wind is still light.

Here's the biggest difference between highs and lows. The reason is again to do with air motion, but not the familiar wind that blows horizontally. More important is up and down motion, and it's perhaps hard to visualise just from 2-D weather maps - you need to think 3-D as I explained in my post about the Nor'west storm of August 1975.

Up and down air motion is much smaller than horizontal, by a factor of a hundred or more. It's very difficult to measure too, although there are indirect ways of estimating it.

When air rises it cools, as Erick Brenstrum explained in his post on Ridge-Top Winds. With enough moisture, cloud will form and possibly rain. Conversely, when air sinks or subsides, it warms and any cloud or rain dissipates. Guess what the typical vertical motion is in highs...sinking or subsidence. That's also why an inversion forms (as Erick explained). 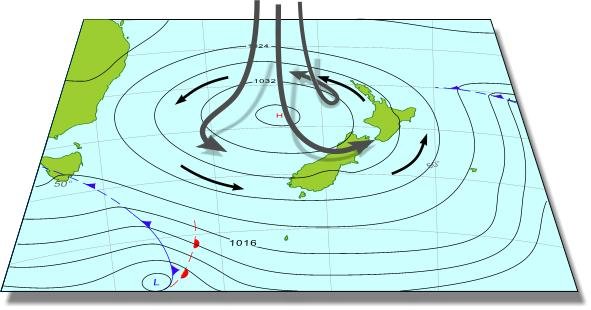 As previous map but in 3-D.

So anticyclones tend to bring clear skies. But sometimes it can be cloudy even when the barometer needle is up high. That's because the sinking air doesn't make it down to the ground and moisture is trapped at low levels - forming stratocumulus cloud. If the cloud is thick enough you might even get some drizzle. Perhaps you've been in an aircraft taking off on an overcast day and quickly pierced through the stratocumulus to completely blue sky?

Finally I should mention that, if you use your barometer, pressure changes are more important than the actual value of the pressure. It's possible to have rain when the air pressure is higher than 1020 hPa - for instance, if there's an area of relatively low pressure between two large highs. Conversely, it's possible to have a sunny day when the pressure is lower than 990 hPa - for example, in a nor'wester along our east coasts with a deep low to the south.

But if the air pressure is rising strongly, then an anticyclone or a ridge of high pressure is heading your way, and any rain is likely to dissipate, especially if the flow is offshore to help along that down motion of the air.