There was a lot of rain in many parts of New Zealand over the last two weeks of May 2010. One of the few places to escape this was the sunny West Coast of South Island - the days are clear and stunning there when the flow is southeasterly. If you had been following the surface weather maps during May you would have noticed a lot of low pressure over the Tasman Sea and northern NZ, and periods of relatively high pressure farther south. This pattern has also been the case aloft, where upper level processes have been driving what has happened at the surface. Take a look at the two charts below, showing the variation of upper level pressure heights. You can think of them as showing where the  flow was cyclonic and anticyclonic in the upper atmosphere. 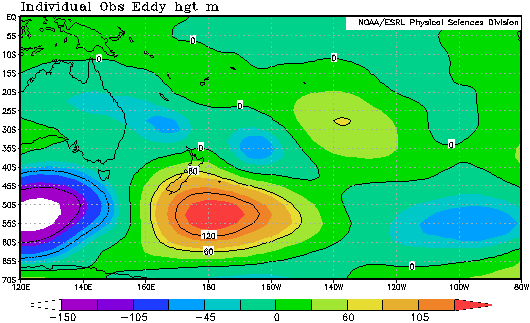 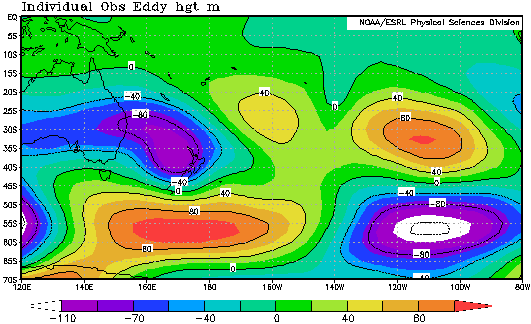 As previous, but for 15 to 28 May 2010.
Images courtesy U.S National Oceanic & Atmospheric Administration Earth System Research Laboratory
During the first half of May (top chart) there was a strong tendency for anticyclonic conditions southeast of NZ. For the second half of May (bottom chart), this anticyclonic anomaly shifted westwards while a marked cyclonic tendency formed over the Tasman Sea, North Island and much of the South Island. This combination generated not only a lot of rain, but also a powerful easterly flow that amplified the rain in many eastern parts of the country.

Northern districts have had a lot of rain too, and the intense falls that were reliably recorded in Whakatane on Tuesday evening (1 June) were phenomenal. In just one hour 89.8 mm of rain fell, plus there was heavy rain either side of that hour. Falls of that intensity are fortunately rare in New Zealand, and it's hard to imagine what they're like unless you've experienced them. I did once, when visiting Nadi, Fiji many years ago...

"It was the heaviest rain I'd ever seen, and it set a local record.  I recall having to leave a building and get into a car, and needing to go through the rain for just 2 or 3 metres. But that was enough for my clothes to be soaked. Driving was virtually impossible until it had eased off."

The way the depression formed off the east coast of Australia is actually quite common. The sea off the eastern Australian seaboard is a favoured area for depressions to form, as shown here: 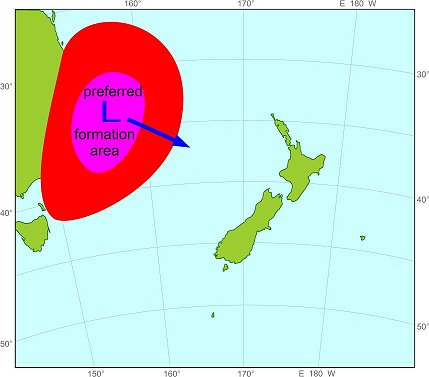 The reason is to do with the temperature and moisture contrast between the Australian continent and the sea - these contrasts are the food of developing lows, and are perhaps the main way that Australia influences our weather and climate. Once the lows have formed, they then preferentially move towards the east-southeast - you guessed it, straight towards New Zealand.

Keep an eye out, if you can, on the weather maps  before all holiday or breakaways.  Our forecasters are always monitoring prospective rain closely to give you the best possible forewarning.