In New Zealand, most people would not consider May and October to be winter months. This year, however, they were noticeably colder than usual. NIWA remarked upon this in their Climate Summaries for May and October 2009. To quote very selectively from these summaries:

In contrast with this, here's the equivalent quote from NIWA's Climate Summary for August 2009:

All of NIWA's Climate Summaries do, of course, contain much more information than the simple quotes above. I thought it might be interesting to look at the average pressure pattern for each of the months from May to October of 2009. As you can see below, these monthly patterns are different. In particular: 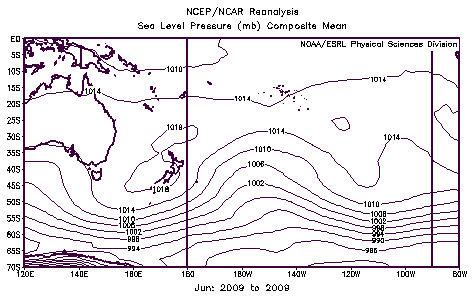 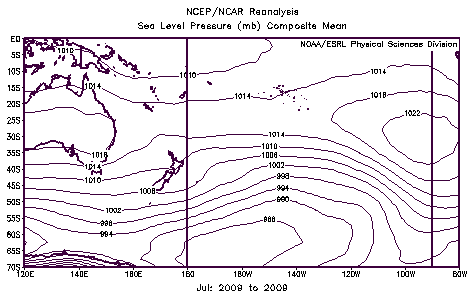 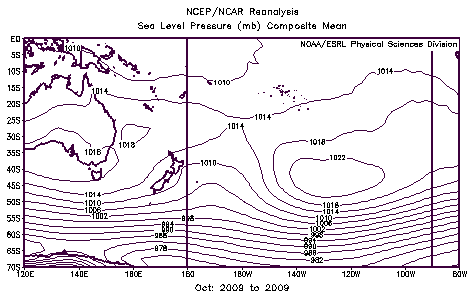 Remember that these patterns are averaged over the whole month and consequently don't show the day-to-day progression of weather features (anticyclones, depressions, fronts, etc). But especially in May, August and October 2009, what they do show is the persistence of weather features in particular places. So why is it that, sometimes, weather features become stuck in one place? The answer lies in what meteorologists call the upper air. The part of the atmosphere that the weather occurs in is called the troposphere and is about 10 kilometres thick. The surface pressure pattern - that is, the lines you see drawn on a weather map - are simply one way of representing everything that's going on in that 10 kilometres or so of air above. The atmospheric flow above the Earth's surface - in the upper air - is what really matters. It's the waves in this flow that drive the day-to-day weather.

Most of the time, the winds in the upper air blow more or less from west to east, in a wave-like fashion, as explained in this blog post by Chris Webster. But sometimes the wave-like pattern, instead of progressing from west to east, comes to halt. When this happens, there's invariably a strong anticyclonic pattern right through the depth of the troposphere over some part of the hemisphere. Think of it like a big boulder in a river: the water flows around it, and the presence of the obstacle is felt some way upstream. And like in a river, the obstacle can be pushed away if the flow against it is strong enough. In weather forecasting, this behaviour of the atmosphere is described as blocking. In May, August and October 2009 the anticyclones over the South Pacific are blocking the upstream flow. Interesting, isn't it, how weather features so far away can have such a big effect on New Zealand's weather.