June 21st is the Northern Solstice and marks the shortest day here in the Southern Hemisphere.  On the 21st the sunrise is around 7:48am and sunset 5:00pm in Wellington, giving just over 9 hours of potential sunshine for the capital. The timing of sunrise and sunset varies from location to location, sunrise in Gisborne being almost an hour earlier than in Invercargill.  You can find the sunrise and sunset times on the forecast pages at www.metservice.com, just underneath the towns and cities forecasts.

Because of the way the Earth is tilted about its axis, the length of the day changes through the year. On June the 21st the Southern Hemisphere will be tilted furthest away from the sun and so it will be the shortest day of the year and the sun will appear at its lowest point in the sky. 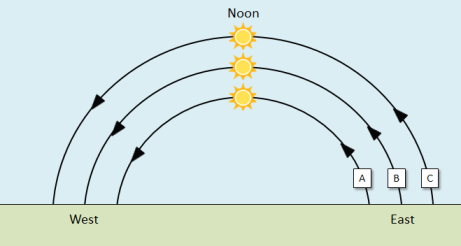 The image above shows the path of the sun across the sky during A) the winter solstice, B) at the equinoxes, and C) during the summer solstice. There is more information about solstices and equinoxes on this earlier blog post  https://blog.metservice.com/equinox .

How do we measure how much sunshine there has been?
MetService uses a combination of both automatic and manual observations to calculate the amount of sunshine that makes it through the clouds to the ground.  The sensors at automatic weather stations use light-sensitive electronic detectors to accurately measure the amount of incoming radiation from the sun.

The measurement is given in scientific units of Watts per square metre (W m-2). Manual stations historically use a sunshine recorder, and these observations were still made at the Wellington and Christchurch offices of MetService until 2020.  Additionally, sunshine recorder information is collected by observers at other stations and passed on to the forecasters.  This Campbell Stokes sunshine recording device used to sit on top of the MetService weather office in the middle of the Wellington Botanical gardens. 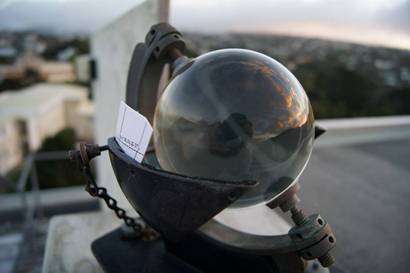 It is a relatively simple piece of equipment consisting of a large glass sphere and a metal frame that holds a weather resistant cardboard strip. The sphere acts like a magnifying glass and focuses sunlight into a point. If there is enough sunlight the focused point will be hot enough to burn a hole in the piece of card. The picture below shows an example of the card record with holes burnt when there was enough sunshine. 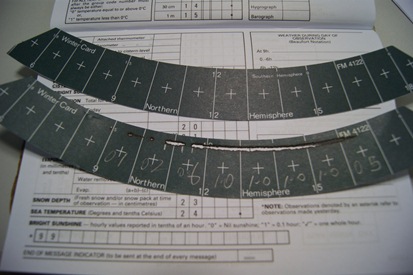 In the southern hemisphere we read the card right to left. Each of the white lines marks a whole hour. By measuring the amount of burning on the card we can calculate how much sunshine there has been.  In this case, it was a sunny morning but cloudier in the afternoon.