Astronomers, logically, time the seasons using the solstices and equinoxes of earth’s orbit around the sun. By this reckoning, spring in the southern hemisphere starts with the vernal equinox. Note that this makes our winter last 93 days and summer 89 days because the earth’s orbit is slightly elliptical and the earth speeds up a bit during our summer.

For practical purposes climatologists measure climate data averaged over each calendar month, and by this reckoning the months of September to November are taken as the southern hemisphere spring. Note that by this reckoning summer lasts 90 days (91 days in a leap year). In New Zealand this method of marking the seasons is more popular than using the equinox and solstice. Fair enough, it adds 1 or 2 days to summer  :)

You may notice that the sunrise and sunset times given on metservice.com (and in other media) don't have night and day the same length on the day of the equinox. Typically daytime seems to be around 7 minutes longer than twelve hours. This is because sunrise is defined at the time the top limb of the sun is just visible on the horizon, and similarly sunset is defined when the top limb of the sun disappears below the horizon.

Due to refraction of the atmosphere, and the fact the sun is not just a point, the sun appears and disappears when its centre is slightly below the horizon. This explains the “extra” daylight. 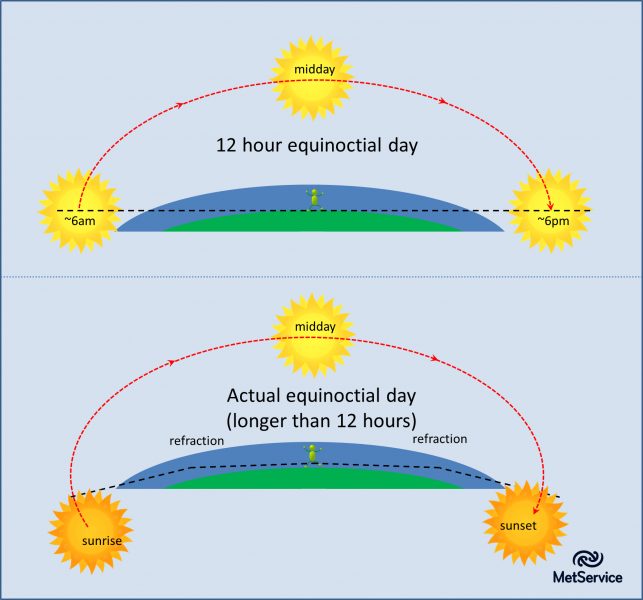 The term used to describe the date when time between sunrise and sunset crosses twelve hours is the equilux.

Over the few weeks after the spring equinox, we get to notice the longer days (thanks in part to our switch to Daylight Saving), and there will be extra warmth reaching the southern ocean. This helps to activate the generally westerly quarter winds found there, and usually causes these winds to expand onto New Zealand producing fronts and squally winds. This period of “equinoctial gales” normally reaches its peak in October and November.