I started tramping as a teenager with the expectation of rain in the hills about two days out of three. So we were always prepared to change plans if confronted by a river in flood. Likewise, conditions on the tops could send us scurrying back below the bush line, as the wind over the ridge crests was sometimes strong enough to throw an adult carrying a heavy pack off their feet.

Once, after returning from a trip when this happened, I checked the wind measurements made by the weather balloon released nearby at the same time. The balloon flight found only 30 knots at the height of the ridge but on the ridge top itself the wind would have been around 60 knots.

This sort of enhancement of the wind strength is greatest when the wind blows perpendicular to the ridgeline – a northwest wind over many mountains in New Zealand. It is also helped by the presence of a temperature inversion in the atmosphere above the ridge.

An inversion occurs when the air temperature increases with height through a shallow layer of the atmosphere. Normally, the temperature decreases the higher you go – which is why there is snow on the tops of mountains. However, when an anticyclone develops, it creates a temperature inversion that lowers to a kilometre or so above sea-level. The colder air below the inversion is denser than the warmer air above and so buoyancy forces make it hard for the cold air to rise.

If an inversion lies just a short distance above the ridge then the air accelerates through the narrow gap between the ridge and the inversion - a bit like the way a thumb held over a trickling tap can squirt water across a room.

Frequently, these extreme winds over the ridge tops are accompanied by dense fog with visibility down to five metres or even less. Fog this thick is caused by the speed with which the air rises to reach the ridge top. As air rises, it experiences lower surrounding air pressure, which causes it to expand, which, in turn, causes its temperature to fall. The amount of water gas the air can contain depends on its temperature. Warmer air is able to hold more water gas than colder air.

Once the rising air cools to the point that it reaches 100% humidity, some of the water gas condenses to form the tiny liquid droplets that clouds are made of. The faster the air rises, the quicker the water droplets form and the denser the cloud or fog becomes.

As the anticyclone intensifies, the inversion usually lowers below the level of the ridge tops, the wind speed drops and the fog evaporates. Then the ridge lines are ok for tramping, although strong gales may still continue around the ends of the mountain chains, in places like Cook Strait or south of Fiordland. 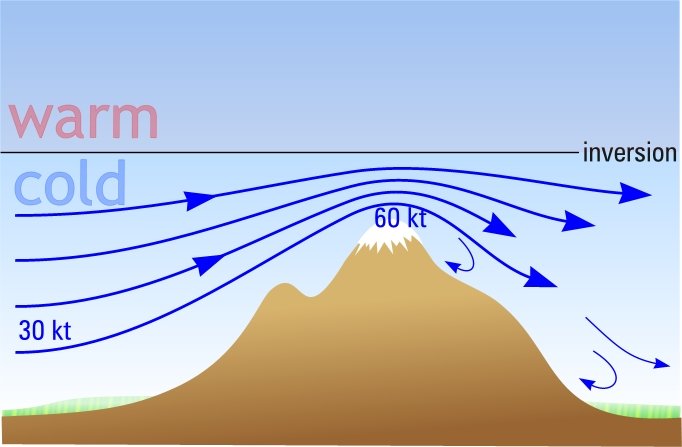