Beach weather or a tropical cyclone? 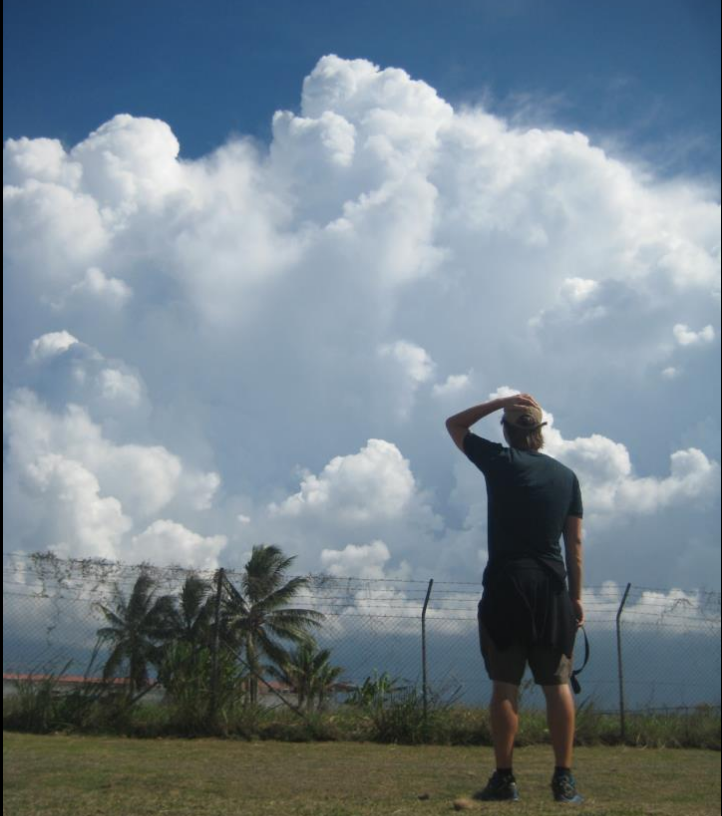 Since 1 November 2009, RSMC (Regional Specialized Meteorological Centre) Wellington, of MetService, Lead Meteorologists have produced twice-daily broadscale guidance for expected severe weather over the next 5 days in the tropical southwest Pacific. This type of guidance is known as the South Pacific Guidance charts, or SPG.

Above: From July 2012, an example of South Pacific Guidance produced by a Lead Forecaster at RSMC Wellington (MetService). It highlighted areas and probabilities of severe weather developing 4 days out.
It's important to note that we are not doing the job of forecasters in each country. This South Pacific Guidance (SPG) chart is another piece of information that they can use to write their forecasts, but should not be used in isolation.

Why do we do this?

SPG charts are one of the key products of the Severe Weather Forecasting and Disaster Risk Reduction Demonstration Project,  (SWFDDP). The project is overseen by the World Meteorological Organization (WMO), based in Geneva. What is it trying to do? 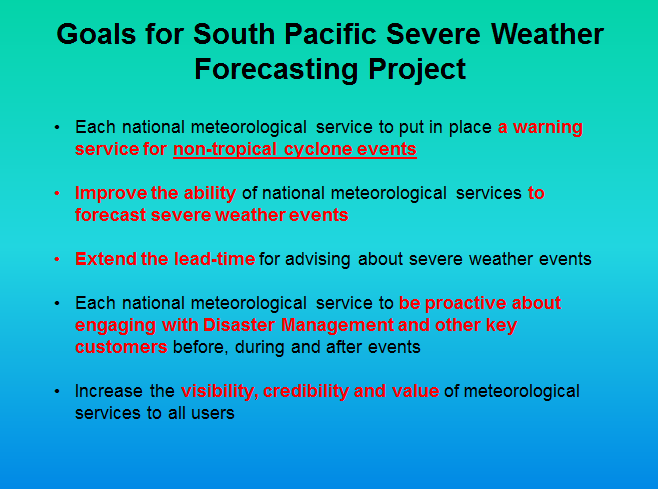 Above: The goals for the project.

The project is not unique to our part of the world. It began in Africa in the mid-2000s, and there are now two separate African projects covering 16 countries in Southern Africa and 6 countries in Eastern Africa. RSMCs in Pretoria, La Reunion, Nairobi and Dar es Salaam lead these projects. There are future plans for similar projects in Southeast Asia and the Bay of Bengal. The southwest Pacific project includes 9 Pacific Island Countries ( Solomon Islands, Vanuatu, Fiji, Tuvalu, Kiribati, Tonga, Samoa, Niue and the Cook Islands) and 2 Territories (American Samoa and Tokelau) .

What do we mean by Severe Weather?

“Severe weather” needs to be defined carefully and in a way that is worthwhile and meaningful for all participating countries. Differences in latitude and terrain across the SW Pacific make this a tricky task. The current thresholds for severe weather are shown below: 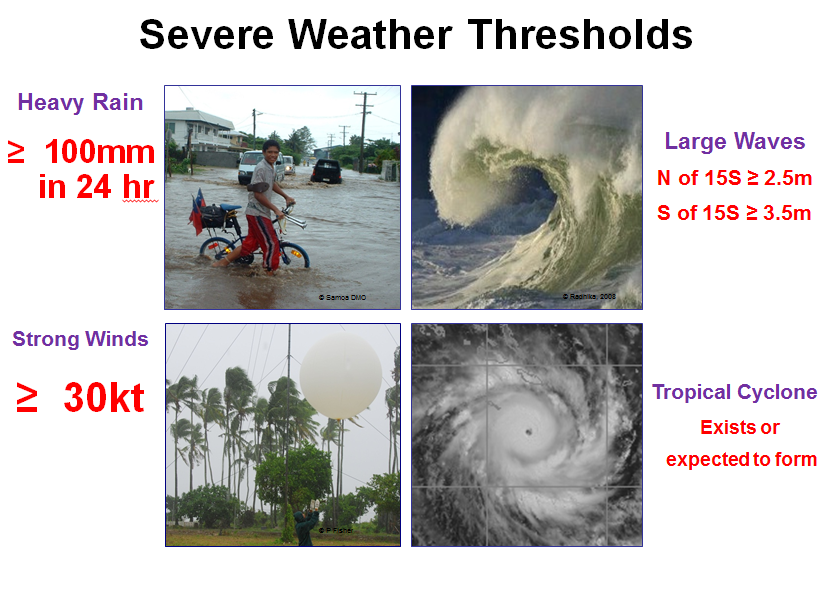 Above: Severe Weather Thresholds for the SWFDDP.

As shown in the goals above, a major aim of the project is to raise awareness and capabilities in dealing with severe weather outside of tropical cyclones. The first image in this post showed cloud build-ups about the higher ground of Guadalcanal. These may produce rainfall in excess of 100mm in 24 hours, but if they cover a very small area are not currently included in the SWFDDP. The project is really focussed on broadscale weather, which can be predicted with some accuracy days ahead of time.

What else does MetService do in the tropics?

The Lead Forecaster draws the "SPG" charts we saw above. Other duties of the Lead Forecaster in the tropics include regular discussions with meteorologists in RSMC Nadi regarding future tropical cyclone formation, production of bulletins for the New Zealand Ministry of Foreign Affairs and Trade detailing future tropical cyclone potential, and drawing streamline analyses. 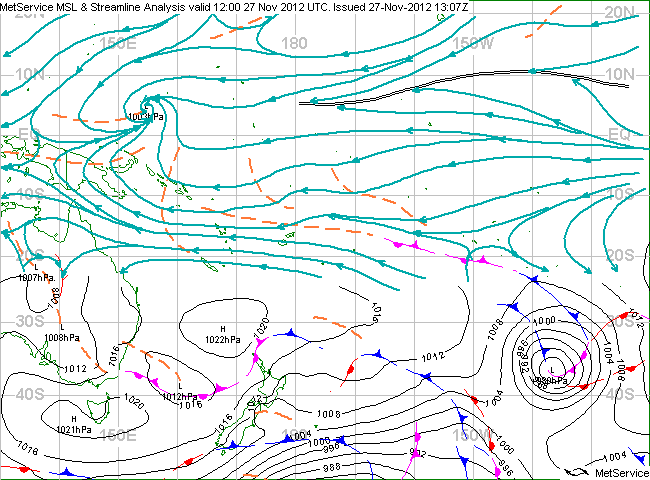 South of 25S, the familiar isobars are drawn. To the north, the teal-coloured lines are streamlines which show the windflow. The double black lines north of the equator mark the ITCZ, a major area of wind convergence. More on convergence here

Streamline analyses look quite different to the regular “weather maps” shown in New Zealand newspapers, the MetService website, and on TV. This type of chart is drawn because as you get further into the tropics (especially between the latitudes of 15S and 15N) drawing of isobars becomes increasingly difficult, ultimately impossible, and the wind no longer behaves with the same relation to isobars as it does in temperate regions.

In producing SPG charts, lead forecasters have to be aware of what is happening right now (using satellite data and surface observations and combining these into a streamline analysis) and what is expected to happen during the next 5 days. This requires combining meteorological understanding with numerical weather prediction (NWP) products from supercomputers around the world. In particular, products known as ‘ensemble prediction systems’ are used.   Ensemble products provide a way of dealing with the uncertainty in the atmosphere.

The atmosphere is large and extremely complicated, hence it's impossible to perfectly know everything about it at any given moment. But the problem is that the atmosphere is very susceptible to very minor changes in what is happening right now. These minor changes are proven to have a huge impact in the future. This is known as Chaos Theory and has been popularised with the well-known “butterfly effect”. 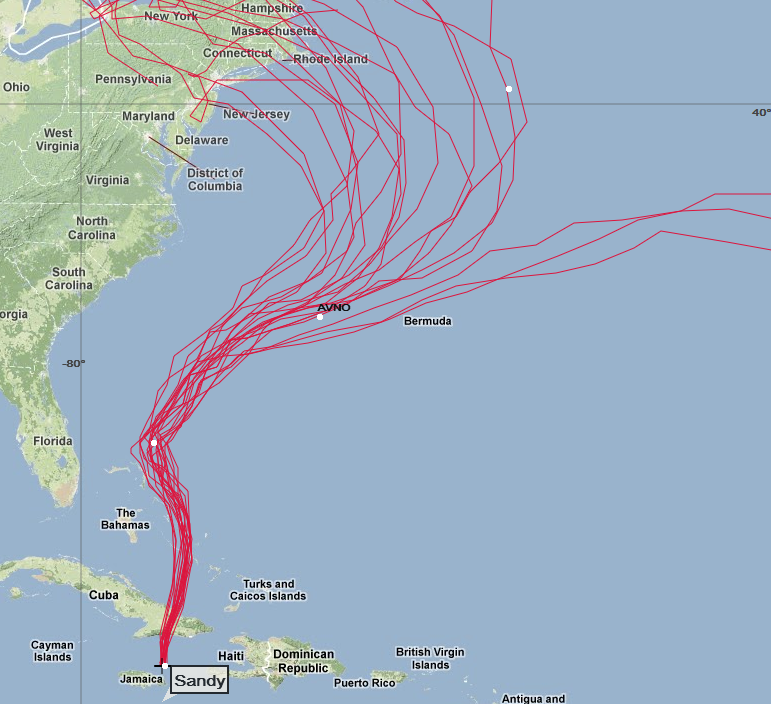 Global Ensemble Forecast System forecast tracks for Hurricane SANDY (courtesy NOAA). Ensemble forecasting aims to find out the impacts of initial uncertainties in the atmosphere on the future conditions of the atmosphere - in this case the position of a hurricane.

Understanding, and interpreting, ensemble prediction systems is a delicate operation, but it is entirely essential in modern forecasting. Without it, forecasters are severely restricted in their  outlooks. MetService also runs a website called MetConnect Pacific. This is a portal for forecasters involved in the SWFDDP to access information, observations and the South Pacific Guidance charts drawn by MetService Lead Forecasters.

Thanks to financial aid from the Climate Change Development Fund administered by the New Zealand Ministry for the Environment, MetService has been able to conduct in-country training between May 2012 and November 2012 for all nine participating Pacific Island Countries. On each trip, two meteorologists from MetService have provided training, along with meteorologists from the National Weather Service in Hawaii for the trips to Samoa and Fiji.

What does this project, which focusses on the weather over the next 5 days, have to do with climate change, which looks into seasonal, interannual to decadal changes timescales? We believe that dealing with extreme weather is the first vital step towards managing the risks of extreme events and disasters to advance  climate change adaptation at the community level.

According to many climate scientists, climate extremes (extreme weather or climate events) such as substantial warming in temperature extremes, heavy precipitation or the proportion of total rainfall from heavy falls, average tropical cyclone maximum wind speed are likely to become more common in the future as the earth warms up. The recent Hurricane Sandy that struck the eastern United States could  be an example of this. 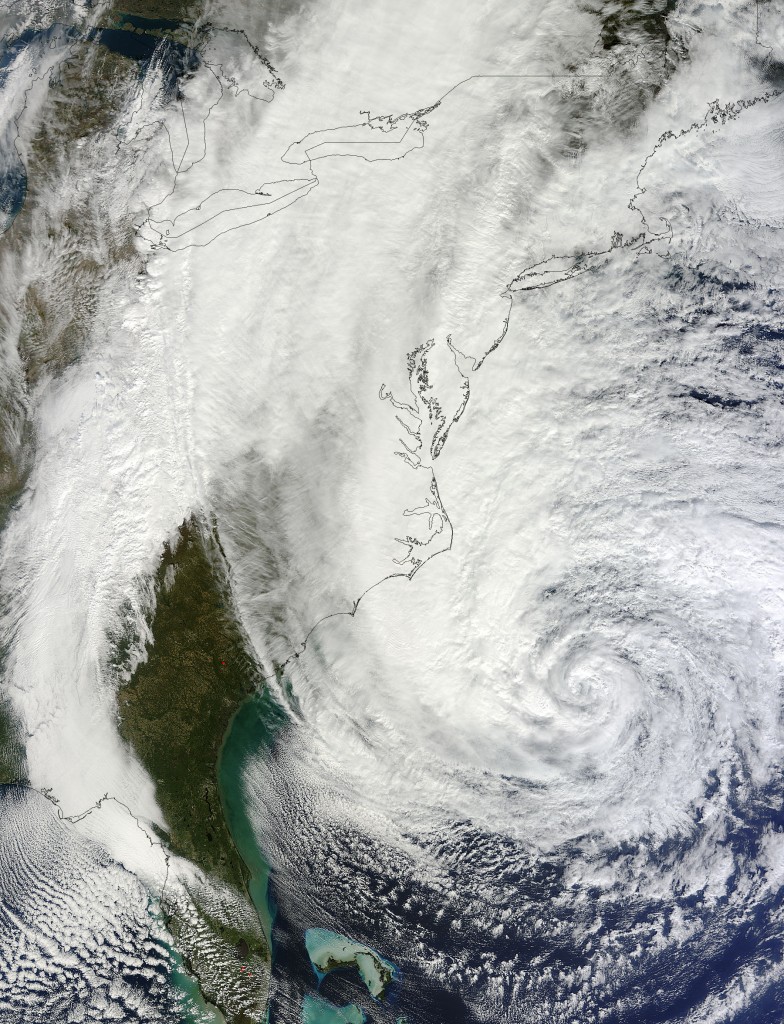 MODIS image of Hurricane SANDY on 28th October 2012 (image courtesy NASA). According to many climate scientists, average tropical cyclone maximum wind speeds are likely to increase as the earth warms up.

What we did in our training during 2012

The training has partly focussed on the practical use of NWP products, especially from ensemble prediction systems. We’ve also covered reporting of severe weather events (which is required every 4 months), case studies (looking at a past weather event and trying to find out what happened and why) and verification (go here or here to see how we do it in NZ). In all countries, either a half-day or full-day workshop devoted to Disaster Risk Reduction has been held.

This has been a practical, interactive day with representation from the national meteorological service and many other agencies such as (but not restricted to) the National Disaster Management Offices, Civil Aviation, Maritime, Fire Service,  Health departments and NGOs such as the Red Cross. On this day we’ve run a mock-up severe weather exercise and asked participants to play their typical roles in responding to the expected weather impacts and formulating a plan of action. 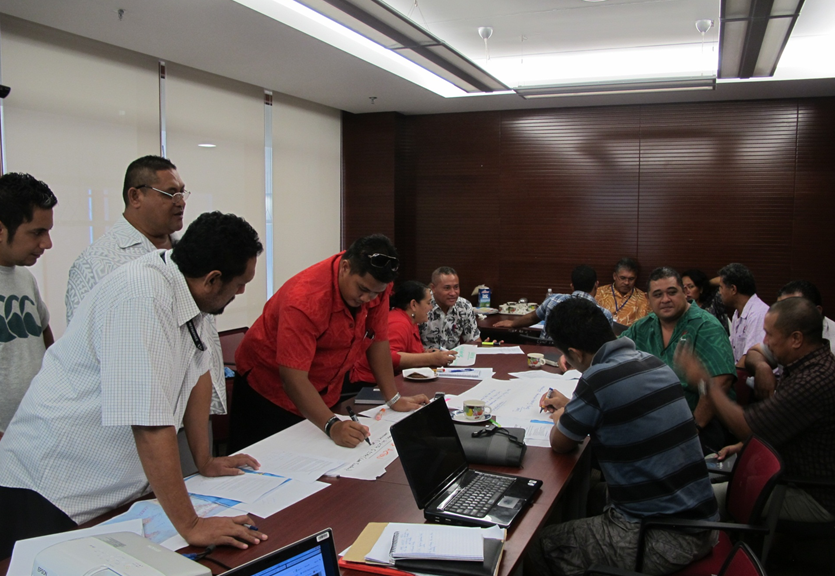 A mock-up severe weather exercise in Apia, May 2012 as part of the SWFDDP training.
Below are some images of the training in various countries over the last seven months: 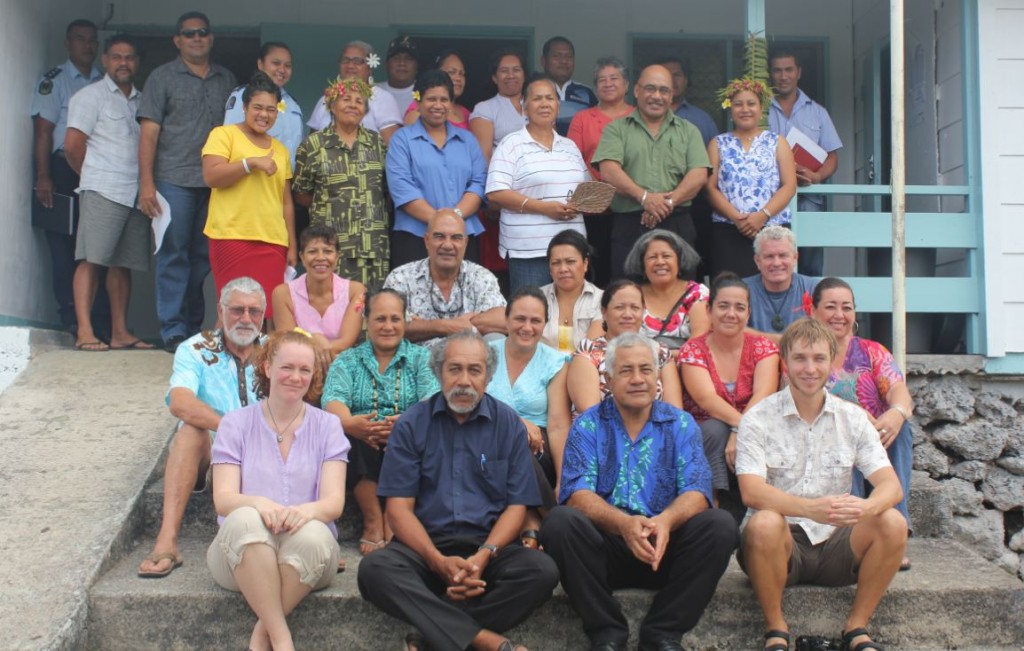 Group photo of facilitators and participants at the Niue SWFDDP Workshop, November 2012. 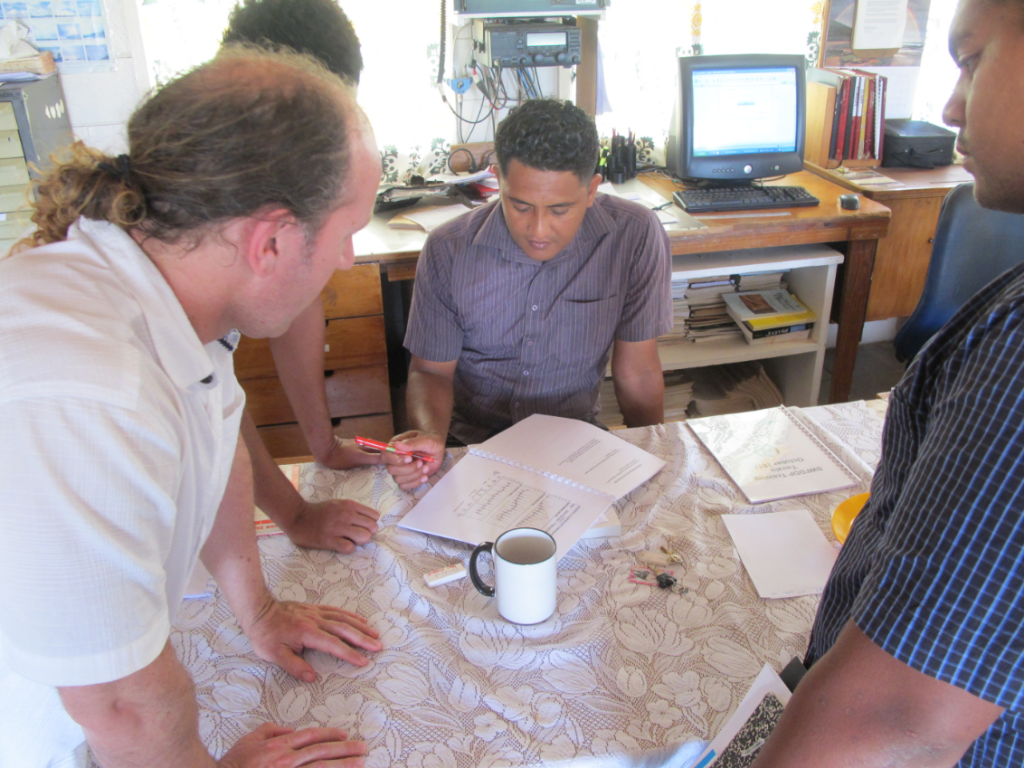 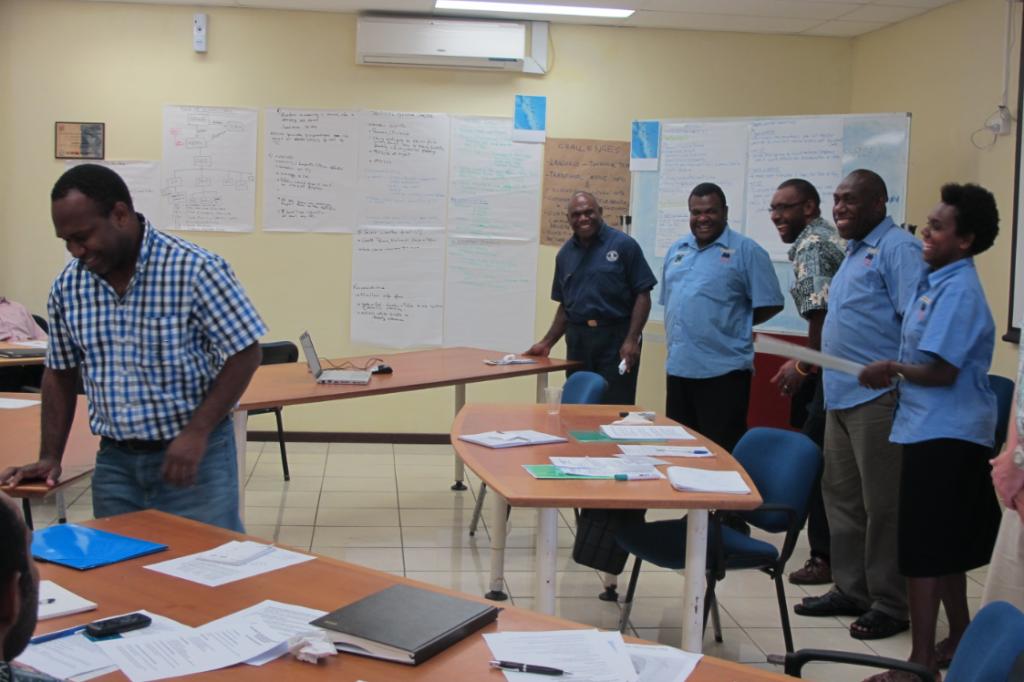 Running a practical exercise at the SWFDDP DRR Workshop in Vanuatu, 2012. 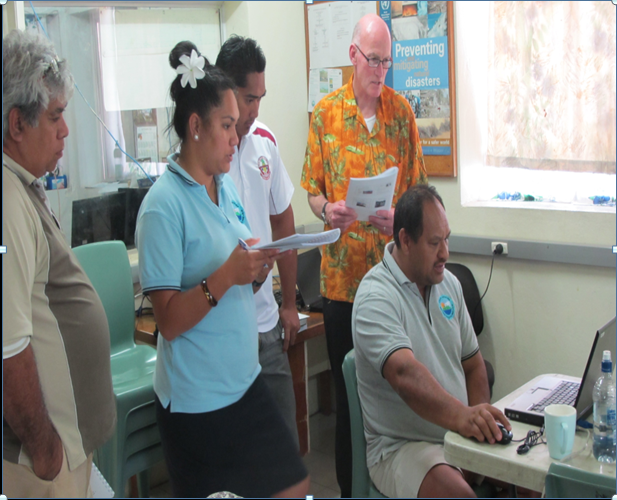 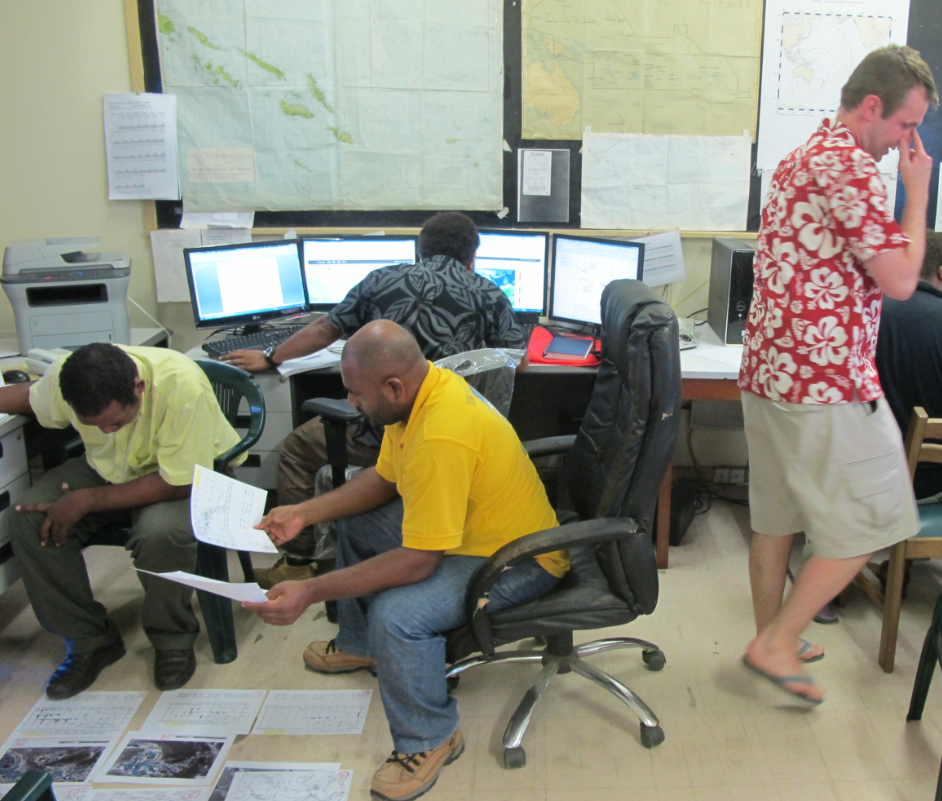 MetService WMO Manager James Lunny facilitates a practical exercise with staff at the Solomon Islands MetService as part of the SWFDDP training 2012. 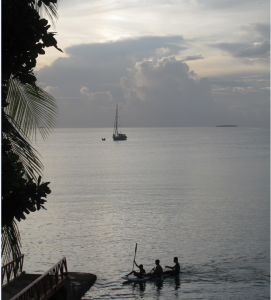 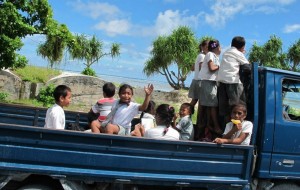 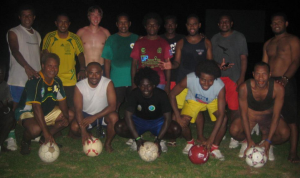