Earlier in the September 2009 many parts of New Zealand had frosts. This is the beginning of spring so it got me thinking about the impact that late season frosts can have on the delicate buds sprouting on trees and vines around the country. 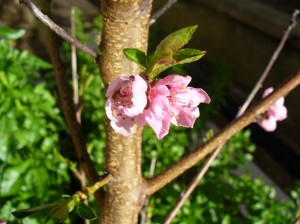 September blossom on a nectarine tree

Let's clarify what a frost actually is. A frost occurs when the temperature falls to below 0°C, and it becomes visible when there is moisture to make ice crystals. Of course, your freezer compartment is in a state of permanent frost (I remember as a boy helping my parents by "defrosting" the freezer!). An air frost is when the air temperature a metre or two above the ground falls below zero. A ground frost is when the air touching the ground cools below zero. A ground frost is more common than an air frost because the strongest cooling at night is usually at the ground surface. The recent frosts were, as usual, when we were under the influence of a big anticyclone with generally clear skies and light winds. These factors are necessary for frost in NZ, as well as time of year. Let's take a closer look at these factors:

The Effect of Cloud

If it's cloudy at night then the air near the ground won't cool enough for a frost to form (although the ground may still get damp with dew). This is because the cloud radiates heat down towards the ground, acting a bit like a blanket over the land. Low clouds like stratocumulus or stratus are very effective at keeping the ground  temperature up at night - you may have noticed this effect when you've been outside on a cloudy winter night. Of course the opposite happens in the daytime - if the cloud hangs around through the morning and into the afternoon, it screens off some of the incoming heat from the sun, and the maximum day-time temperature won't get very high. The low cloud types mentioned above are common in anticylonic weather, especially in areas affected by moist flows coming in from the sea.

The Effect of Wind

The animation below shows what happens when the wind is light enough for frost to occur.

Starting at 2pm, we'll let the clock go forward: When it gets dark on a clear night the ground cools and so the air just above doesn't mix very easily with the air higher up. Near the ground the wind becomes gentle, and the cooling is concentrated in the air that surrounds the tender buds. By the way, in the graph the lines of constant temperature slope towards the top left - I am happy to explain this graphical technique further if you're interested.

If the wind aloft is strong, it forces its way down to the ground, lifting the cold air and mixing it up through a deep layer. The night-time cooling gets spread through such a depth of air that the temperature near the ground doesn't fall enough for a frost to occur. These strong winds can happen whenever the isobars are closely packed - e.g., when a deep depression is nearby. As noted in the blog post on year 12 maths, the wind is always light near the centre of an anticyclone. So in anticyclones there isn't much forcing from the wind to disrupt the night-time cooling.

In summer we don't get frosts (apart from up in the mountains). This is because of the accumulated heating from the sun: the days are long and the sun heats the ground powerfully during the day. The heat is then stored in the sub-soil and in the air above. Extra moisture in the form of  water vapour in the air over summer also slows down the night-time cooling. On clear calm summer nights the temperature falls but, before it gets anywhere near zero, the dawn of a new day begins. So any tender young plants are safe from the cold during the summer months. In addition to the factors above, there's the type of terrain to consider. For example, different soil types will cool at different rates. And a sloping surface won't cool as much as a horizontal one  - these could be fertile topics for a future blog post :-). As we get further into spring the likelihood of frosts decreases. But watch out for a southerly that pushes pre-chilled air onto the land, then peters out as an anticyclone moves on. If the skies clear too, we will be susceptible to a late season frost.