It's early days in a weather event which is likely to be memorable for its coldness. Below is a satellite image for midday Sunday. The wind flow over New Zealand is generally from the southwest; the coldest showery air has made its way onto Fiordland, Southland, Otago and south Canterbury. It's not raining or snowing over all of southern New Zealand because the wind flow is more or less lined up with the South Island, thereby sheltering some places, and because the precipitation is showery. 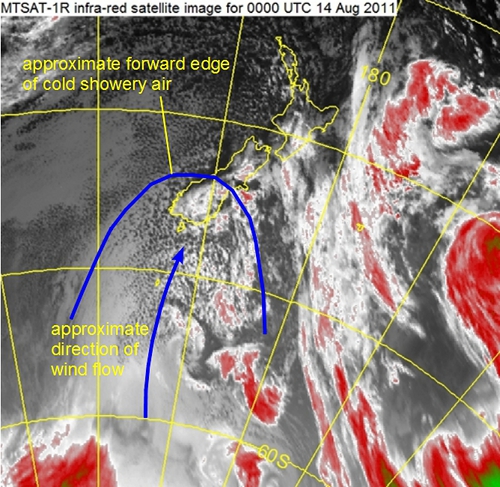 The surface temperature doesn't necessarily tell the whole story. Below is a graph of the air temperature for the 24 hours from 1:00pm Saturday 13 August to 1:00pm Sunday 14 August. Note how the air temperature at Invercargill Airport and Nugget Point, both fairly open to the southwest, has been on a pretty steady downward trend.

At 2:00pm Sunday, the temperature at Nugget Point was 1.0 C and the wind speed was 85 km/h. Brrr. At Timaru Airport, on the other hand, the temperature rose sharply when the southwest change arrived mid Sunday morning - the reverse of what might be expected.

The period overnight Saturday to dawn Sunday at Timaru Airport was one of clear skies and fairly light winds, so the quickly-cooling land surface during this period cooled the air immediately above it and an inversion formed. When the southwest change arrived, the air once again became well-mixed. But this southwest air is expected to also become steadily colder.

Here's another look at why the surface temperature doesn't necessarily tell the whole story. In my blog post about the winter storm of early July 2011, I partially explained how showers may form in cold air moving over a warmer sea surface. The (relatively) warm sea heats "blobs" of the air immediately above it; these blobs then ascend because they are less dense than surrounding air. For the ascending process to continue, the surrounding air must remain relatively cooler than the ascending warm blobs. Thus, it is important to have information - that is, observations and forecasts - about the vertical temperature structure of the atmosphere. 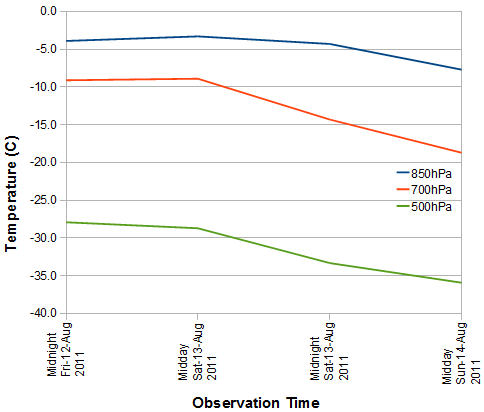 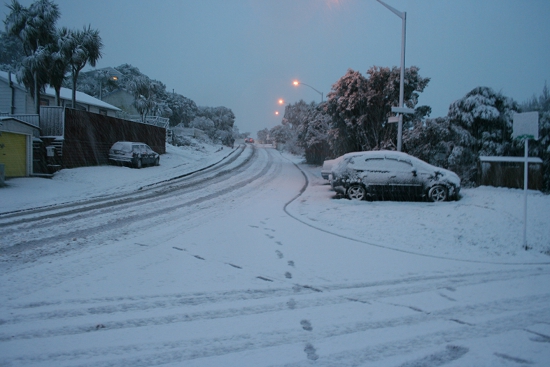 At midday Sunday 14 August the freezing level around Wellington, obtained from the Paraparaumu radiosonde balloon flight, was just over 1000 metres and falling (it was around 1600 metres at midnight Saturday 13 August). But late on Sunday afternoon, it would still have been well above the level to which snow fell in Wellington. 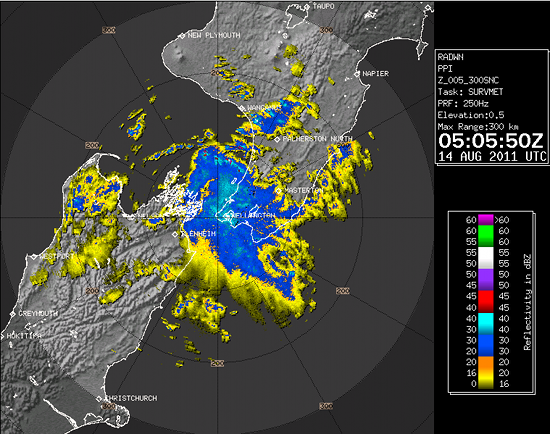 So far in this blog, I've been talking quite a bit about the temperature throughout the depth of the troposphere (the troposphere is the part of the atmosphere in which weather systems exist). Time, now for a picture. Below is a plot of: 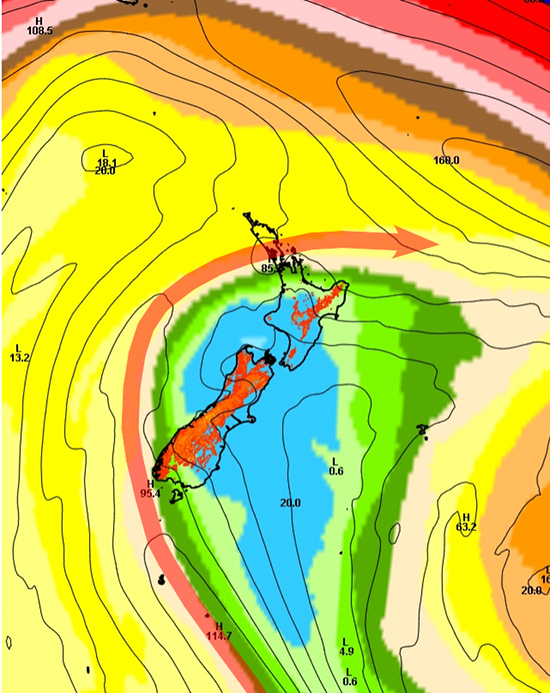 The colours in this plot are forecast temperature; over most of New Zealand, the temperature at around 18,000 ft was forecast to be -30 C or lower.
The important thing to note is that a large mass of Antarctic air covers almost all of New Zealand. The red arrow on this plot shows the forecast position of the axis of strongest winds, near the top of the troposphere, at midday Monday 15 August.

This is the polar jet, on the border between the deep pool of Antarctic air over New Zealand and the warmer mid-latitude air around it. Incidentally, the forecast temperatures compare very well with the observed temperatures at midday Monday 15 August, as shown in the table below.

This is a classic example of the melting effect (see the post made at 6:15pm Sunday 14 August 2011, above). Over the last few days, MetService's Severe Weather Forecasters have spent a lot of time considering how far below the freezing level snow would fall. This requires a good understanding of cloud physics. 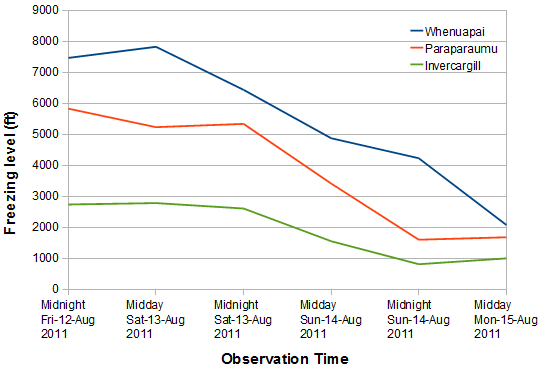 Here's a few photos from the Wellington snow of June 1976. 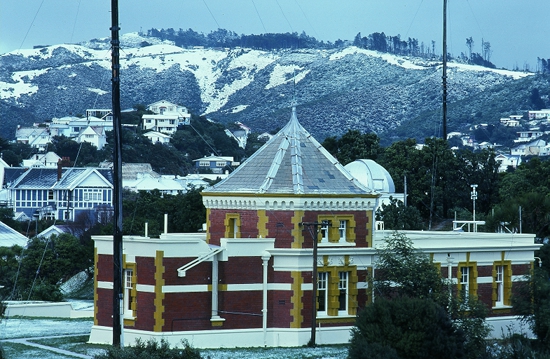 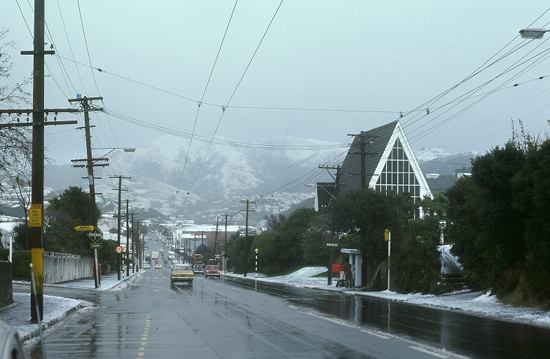 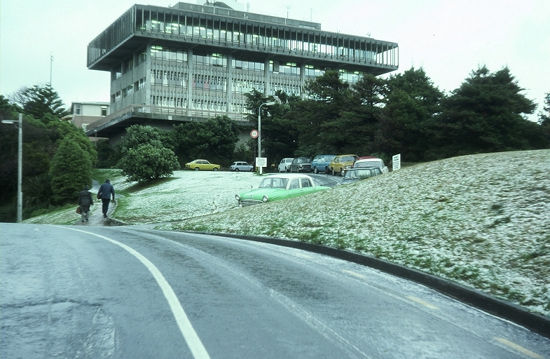 In southerly flows, the West Coast of the South Island is well sheltered by the Southern Alps. Since the southerly took hold on Sunday, the air on the West Coast has been very dry because of the Foehn Effect. Below is a graph of the dew point temperature (the temperature which air must be cooled to for water vapour to condense into water liquid or water solid) at Hokitika Airport from 10am Sunday 14 August to 10am Tuesday 16 August.

On the afternoon and evening of Sunday 14 August, there's a huge change in dew point (around 13 degrees), down to around -10 C. Since then, the dew point has remained negative, generally fluctuating between about -3 C in the morning and -7 C in the afternoon. Such a low dew point makes the air feel much colder than its temperature would suggest. We take the dew point into account when calculating the "feels like" temperature. 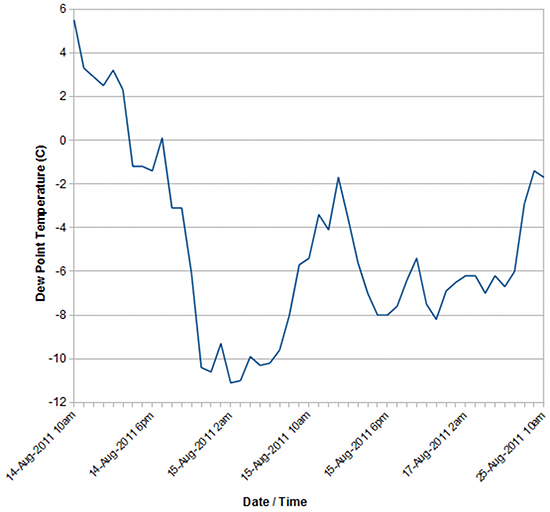 This event has been characterised by many places having low daytime (maximum) temperatures.

Below is a plot of where the air arriving at an altitude of 500 metres above Auckland at midday Monday 15 August came from. Four days previously, it was over the Antarctic landmass; two days previously, it was still over the Antarctic sea ice. The Antarctic sea ice edge is close to its northern-most extent and is near latitude 60 degrees South. Thus, the air arriving at Auckland passed very quickly over the relatively warm ocean between the Antarctic ice edge and New Zealand. In contrast, the air from the Southern Ocean which arrived over Auckland on Saturday 9 July (see my blog post on the stormy period of early July 2011) had travelled over a much longer stretch of ocean, over a longer period of time, and consequently was warmer and moister. 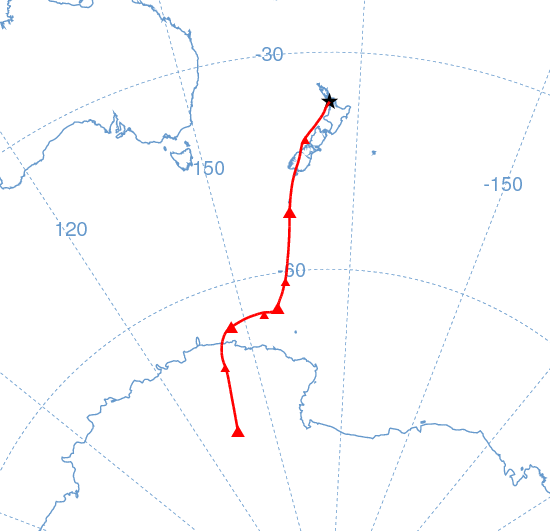 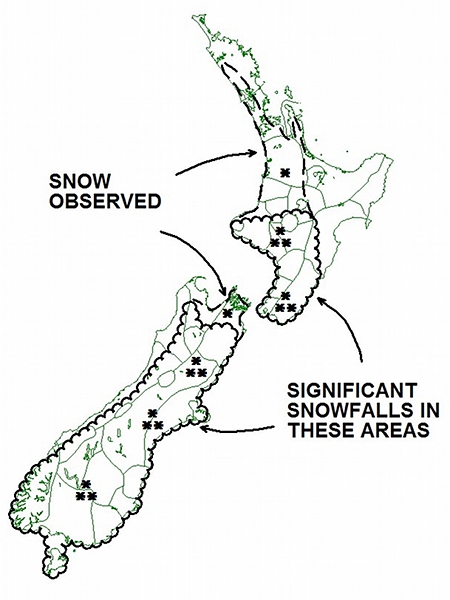 During the next few days, while an anticyclone advances onto the country, the general wind flow will decrease in strength and the depth of cloud along eastern coasts gradually reduce. Near sea level the air over New Zealand remains very cold, and the advancing anticyclone more or less "traps" it in place. Very cold air, clear skies and light winds overnight are a recipe for hard frosts.

Hopefully, the diagram below - known technically as a tephigram - helps illustrate this. It is a plot, in the vertical, of the air temperature and the dew point temperature derived from the radiosonde balloon flight at Invercargill at midday Wednesday 17 August.

At Invercargill there is already a large mass of sinking, warming (and drying) air above about 5000 ft (see text in red on diagram). This sinking air presses on the (relatively) colder air beneath it, trapping it near the Earth's surface.

In this particular case, the zone of transition between the two different air masses is known as a subsidence inversion. I've marked the subsidence inversion on the diagram; it's the broad blue horizontal bar near the bottom. The very cold air trapped below about 5000 ft at Invercargill is much less inclined to move around than the air further up in the atmosphere. As I've explained above, this is partly because of the advancing anticyclone. But it's also partly because cold air is less "runny" than warm air. (Treacle flows much more readily when warm than cold).

On the right of the diagram below are the winds in the vertical, as they were above Invercargill at midday Wednesday 17 August. Clearly (see text in green on diagram), the one wind barb shown below 5000 ft indicates quite a different flow from all the winds above 5000 ft: the flow near the surface has become decoupled from that above. 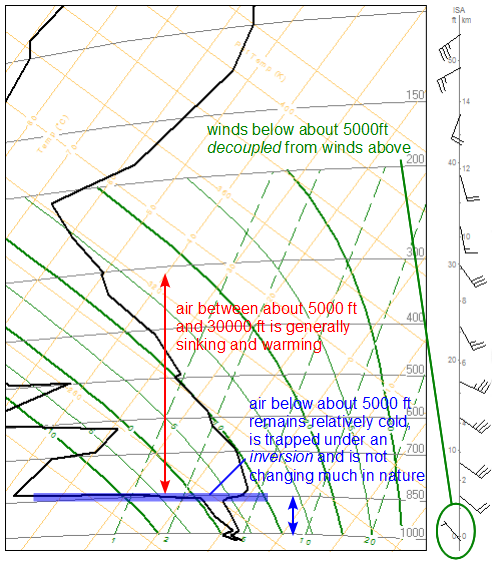 In a general sense, this vertical temperature and wind structure is expected to spread over eastern parts of New Zealand during the next few days as the anticyclone moves closer and pressures over the country rise. 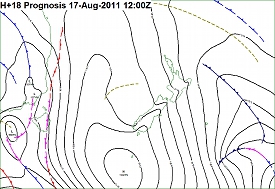 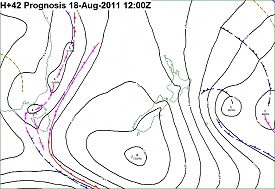 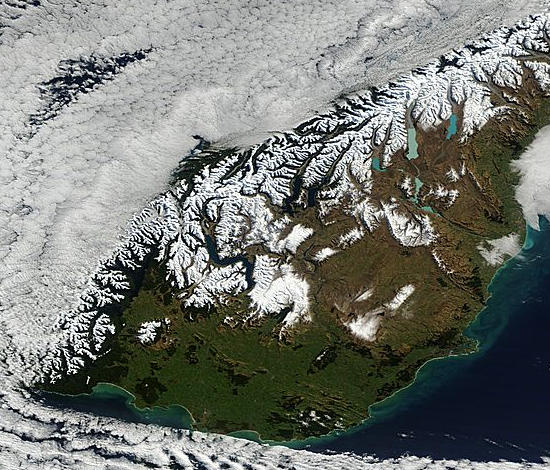 Before: MODIS-Terra visible image for about 10:00am on Wednesday 10 August 2011. Data courtesy NASA/GSFC, Rapid Response. 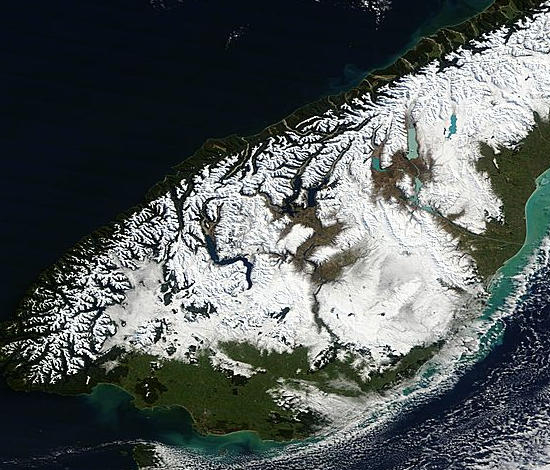 After: MODIS-Terra visible image for about 10:00am on Friday 19 August 2011. Data courtesy NASA/GSFC, Rapid Response.