When recruiting and training people to become meteorologists, MetService requires that trainees hold a university science degree in maths and physics. Why maths and physics? First and foremost, meteorology is a science, and we need people in our National Forecast Centre who are capable of applying the scientific thinking that they’ve developed at university to understand the state of the atmosphere. Let’s look at specific examples of why maths and physics are important to meteorology.

The physics of fog

Forecasting for aviation generally has a low profile as far as the general public is concerned, but it is critical for airlines and pilots for safe and efficient air travel. There are many meteorological phenomena that impact flying, e.g. thunderstorms, turbulence, air frame icing and cross winds on landing. One of the most critical is fog because of the severe reduction in visibility it can cause. It is a fundamental property of moist air that (invisible) water vapour changes into (visible) water when the vapour content reaches a threshold value that depends critically on temperature. The existence of this threshold makes fog forecasting one of the hardest of all weather phenomena to predict.

Fog formation can sit on a knife edge. For example, under suitable conditions fog can form when the air temperature cools to, say, 7 deg C, but if it were to cool to only 8 deg C there’d be no fog. Almost a binary situation, and the difference in how far you can see could drop from 50 km to 500 metres with the extra degree of cooling. When our aeronautical meteorologists forecast fog at New Zealand airports they apply maths and physics, including the principles of thermodynamics, radiative processes, graphs (of cooling rates), and statistics (of airport climates). A basic example of a cooling rate graph is below. 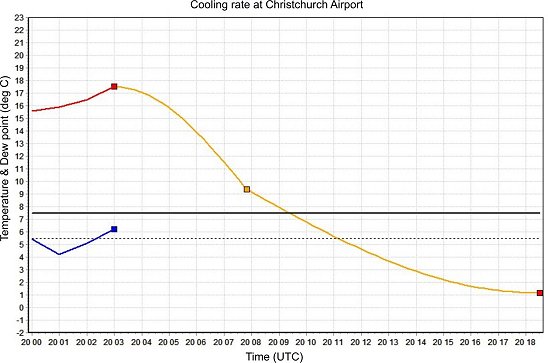 Actual (red) and predicted (orange) temperature, Christchurch International Airport, for overnight hours of 20 and 21 March 2013 (blue line is dew point temperature). The horizontal lines indicate fog formation thresholds. UTC time is 13 hours earlier than NZ Daylight Time, so 20 05 is 6pm local time, 20 15 is 4am and so forth.

Here, the forecaster needs to assess what the overnight temperature will in fact cool to, to form this type of fog (there are other types) based on the available guidance, and decide if there will be enough water vapour present to form the fog.

The basic concepts of probability and statistics are introduced in maths at school. Meteorology is an inexact science and, every day in the National Forecast Centre, scientists are forming hypotheses about future weather outcomes around NZ. The concept of hypothesis testing is usually introduced in Year 13 mathematics with statistics, and further developed at university.

Currently most public weather forecasts in New Zealand state a single expected outcome rather than the range of viable outcomes. This is great in terms of delivering a short forecast but, unfortunately, misses out valuable information about the other viable outcomes that depend on the state of the atmosphere at the time. Some of our forecast users address this by obtaining information expressed as statistical probabilities, for example, as a probability distribution.

In the future, I think it’s likely that public weather forecasts will adapt to an increasing need for probabilistic information.

There are many beautiful shapes in geometry, e.g. the cardioid. Another is the spiral. Spirals turn up in nature in shells and plants. A special type of spiral, the logarithmic spiral, is relevant to meteorology. It is used in a technique to determine the intensity of a tropical cyclone, based on satellite imagery near the eye of the cyclone. 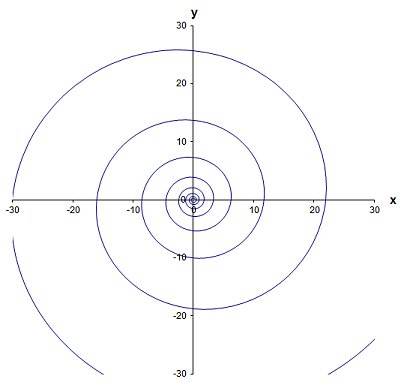 The meteorologist assesses cloud-top temperatures in segments of the spiral, providing an objective gauge about the cyclone’s intensity. Remember trigonometry from school? This branch of maths is important in many sciences. An example related to meteorology is spherical trigonometry, in which any location on Earth can be specified in terms of latitude, longitude and height above the Earth’s surface. Our weather radars make extensive use of the principles of trigonometry to determine the location and movement of precipitation targets.

The concept of rate of change occurs all the time in meteorology. It occurs on many scales, e.g. in less than an hour with the fall of temperature during the passage of a cold front, or over a few days with the decrease of air pressure in an intensifying  depression. In an earlier blog post (Year 12 maths) I gave an example of the importance of maths to meteorology. In mathematics, a rate of change is called a differential or derivative (ask someone doing Year 12 maths!).

To describe the motion of air using the techniques of fluid mechanics (a branch of physics and applied maths), many equations containing differentials crop up. It turns out that, because of chaos theory, there are no easy ways to solve these equations. But all is not lost…

A hundred years ago, a brilliant Englishman called Lewis Richardson found a way to approximate solutions to the equations of air motion.

Nowadays, with the benefit of a new branch of mathematics called numerical analysis and increasingly powerful computers, we can solve the equations accurately up to several days ahead.  Just how accurately depends on the state of the atmosphere at the time, but sometimes it’s possible to predict the development and path of a depression before it has formed. The computers that are required are extremely powerful. The best ones, called super-computers, are found in overseas meteorological centres. Data transfer between continents isn’t a big issue these days, so data from these centres is routinely sent to us so that NZ forecasts benefit from the fruits of Richardson’s pioneering work.

The rate of change of the eastward wind is the acceleration, and the terms on the right-hand side of the equation are the forces acting on the air mass.

The World Meteorological Organisation (WMO) prescribes the educational standards for meteorologists (WMO 1083). A good grounding in both mathematics and physics is essential to achieve this internationally recognised standard.

At MetService we train university graduates to become meteorologists through our graduate training programme (trainee meteorologist career page), which is run in conjunction with the School of Geography, Environment and Earth Sciences at Victoria University of Wellington. If you or someone you know of is thinking of becoming a meteorologist, and wondering what they need to study, tell them to keep up their maths and physics at school, and continue with them through to university.