Summertime convection
Afternoon heat showers are part and parcel of summer for many parts of the country. But from a farming point of view, this type of shower can be highly frustrating. Heat showers, also known as ‘convection,’ typically occur during the driest time of year, when growers are needing rain and wanting some real reliability in the forecast. However, afternoon heat showers are very localised (with an average width of 1-2 km), and are often widely scattered across a region. In many instances, the next door neighbour’s farm is catching one, but you aren’t. The forecast of “fine, apart from isolated afternoon and evening showers” may sound like a cop out, but it does, in fact, reflect what actually occurs within a region (see Figure 1). 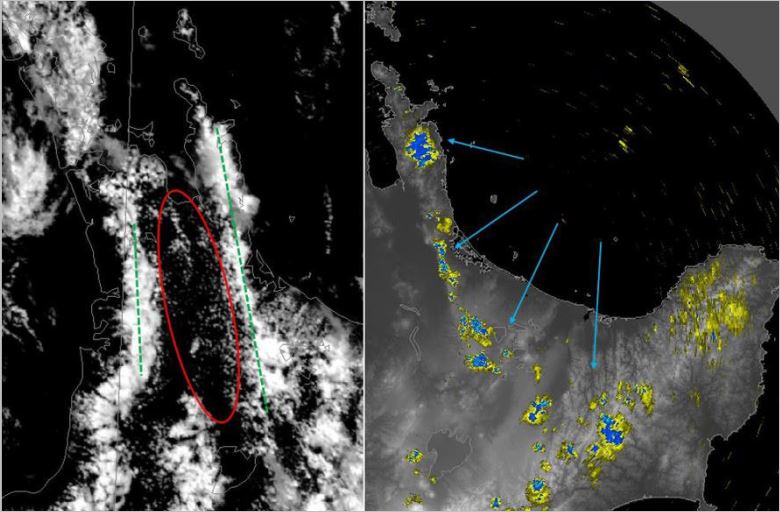 During the warmer months, wind convergence becomes more common and can have greater consequences. As the land heats up, the air above it rises. Cooler air over the sea moves inland to fill this void, and sometimes these sea breezes can collide with existing winds, forming a line of convergence. In summertime, the sun adds more heat to the earth's surface, which means more energy to create clouds, and potentially showers or even thunderstorms can form along these convergence lines. Northland and Auckland are particularly prone to wind convergence lines (Figure 2), since it is quite common for two sea breezes to move inland from opposing coastlines, and collide somewhere in-between. The Waikato and Bay of Plenty also frequently experience a sea breeze convergence pushing inland as the day wears on. In contrast, the ranges of Hawkes Bay and Gisborne, Nelson and Marlborough more frequently see inland showers or thunderstorms bubble up in-situ (that is, a sea breeze isn’t a necessary requirement). 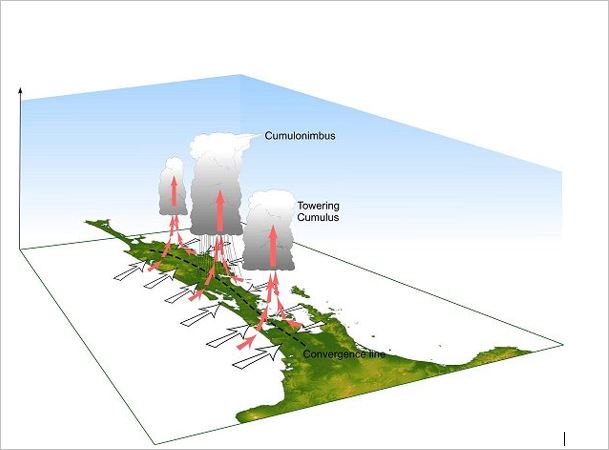 Figure 2: A schematic of two sea breezes colliding (converging) over Northland and Auckland. This is a common summertime occurrence, which often produces localised showers (towering cumulus clouds), or even thunderstorms (cumulonimbus clouds).

Thunderstorms
Sometimes, the atmosphere is very unstable. This means that once you lift a parcel of air, it is going to keep rising, right up until it hits a stable layer (called the tropopause) at around 10 kilometres high. The usual summer-time trigger to initially lift a parcel of air is either a) hot air rising, such as seen with inland heat showers popping up along the ranges or b) colliding winds, often caused by sea breeze convergence. In these ‘runaway atmosphere’ situations, the showers that form won’t stop at a wee sprinkle, but will instead grow to a fully-fledged cumulonimbus, or thunderstorm, cloud. These clouds are the T-Rex of the cloud world – they are the only cloud with potential for thunder, lightning, downpours, hail, tornadoes and damaging straight line winds (often referred to as down-bursts).

Did you know that MetService operates a convection forecasting service, 7 days a week? Forecasters on this desk assess the potential for localised showers and thunderstorms. You can access the latest thinking for today and tomorrow at http://www.metservice.com/warnings/thunderstorm-outlook. 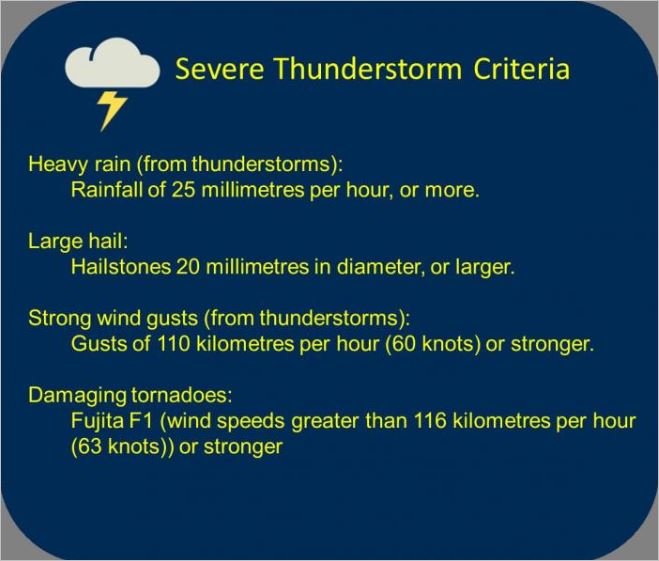 Making it all local for you

Of course, even on a dead-cert summertime convection day, picking whether your place will actually get an afternoon shower or thunderstorm is part local-knowledge, and part watching the radar. You can head to the MetService website to keep an eye on the radar, or better still, try one of the MetService Apps for radar on-the-go. If a thunderstorm risk has been forecast for your area for later in the day, then using the ‘whole brain’ approach is recommended. The analytical part of your brain will register the forecast risk of thunderstorms, but understands that not everyone in the area will get one. In contrast, the cave-man part of your brain will instinctively recognise a dirty great, dark, thunderstorm cell once it has formed. Both parts of the brain are equally important.

To learn more about our Warning and Watch criteria please go to out blog Severe Weather 1-2-3  https://blog.metservice.com/OutlookWatchWarning