On Monday 28th November 2011, a south to southwest change swept its way northwards across Otago and Canterbury during the afternoon.   Temperatures soared to 28°C preceding this change then rapidly plummeted to around 16°C.  This was a good example of what is known in Australasia as a ‘buster'. 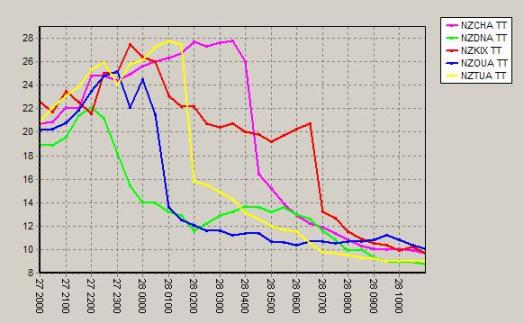 The weather map for 1pm Monday 28 November 2011 showed a typical trough moving across New Zealand. The last of a series of fronts within this trough was the one responsible for this dramatic drop in temperature. 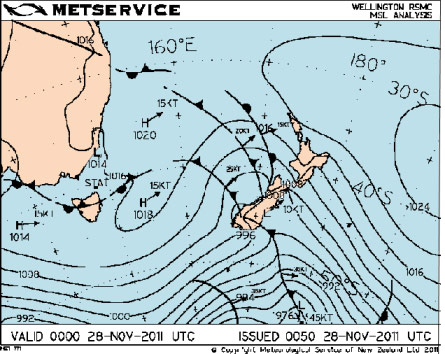 The reasons for temperatures soaring to between 26°C and 28°C ahead of this southerly change are:
-  Northwest winds ahead of the trough warmed by around 5 to 10 degrees Celsius as they descended down the eastern slopes of the Southern Alps
-  Sunny conditions in the relatively clear skies over the Canterbury Plains – on a date less than one month ahead of the longest day.

These warm temperatures combined with falling air pressure to produce a zone of relatively low density. Higher density air in the cooler southerly flow that followed this cold front accelerated into this zone of low density air producing a squally “gust front” with the wind change. This “gust front” built in size and intensity during the afternoon as can be seen from the tweets sent from @metservice during the afternoon

Click here to follow us on Twitter. September to November is the season for the strongest of these southerly busters (but they can occur at any time of the year).  Spring brings the strongest westerly winds of the year to South Island and it is also a time of relative cold offshore sea temperatures.  The temperature difference between the heated air over the Canterbury Plains and seas in the Canterbury Bight is what feeds the wind gusts of a buster. The coldest sea temperatures of the year occur in early spring, and they only just start rising in November.   You can find the latest reading from metservice.com by clicking on ‘marine’ and then ‘beach’ and selecting a suitable site.  The one shown below is Jack's Point near Timaru (timestamp is 10am Wed, 30 Nov 2011). 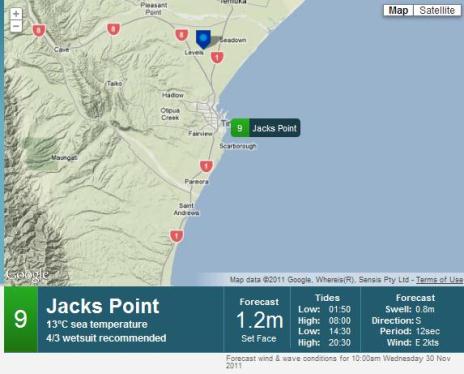