The first test between the All Blacks and the Lions in 1930 was played at Dunedin’s Carisbrook Park just after a snowstorm. Rain started in the morning then turned to snow during the curtain raiser. It became almost impossible to make out the players and some of the crowd went home while others sheltered under blankets and umbrellas. 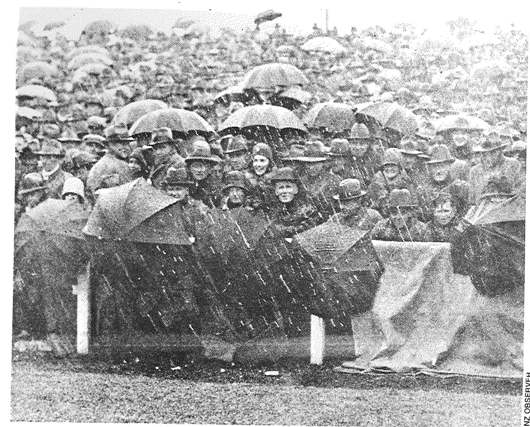 Part of the crowd shelter from one of the snow showers that fell before the match. Photo courtesy of NZ Observer

The snow eased to sleet as the test teams came onto the field then cleared soon after. However, the ground by this time was quite heavy and slippery making expansive back play difficult. The score was 3-3 going into the last minute. The All Blacks were hot on attack, when Great Britain’s Ivor Jones intercepted a pass and took off downfield. As he was tackled by George Nepia he passed to his winger who scored a spectacular try in the corner bringing the crowd to its feet and secured a 6-3 win for Great Britain.

The snow affected eastern areas of the South Island and was regarded as the heaviest in more than a decade. Southland and south Otago were worst hit with many roads closed, delaying spectators trying to return home after the test. Gore had 15 cm while some places as much as 23 cm. When the train carrying the Great Britain rugby team to Invercargill on the Sunday stopped at Gore, the players started a snowball fight amongst themselves before uniting and bombarding the crowd that had turned out to greet them.

The Great Britain team must have become well acclimatised to snow by the time of their game against Ranfurly Shield holders Southland on the Wednesday. There was a bitterly cold wind and further snow fell but Great Britain won 9-3.

The Southland rugby team were no strangers to snow and famously defeated Manawatu in a Shield defence in 1939 when the ground was covered in 10 cm of snow (see my previous blog).

A previous Great Britain team also had a close encounter with snow when it played Canterbury-South Canterbury-West Coast combined at Lancaster Park on 6 August 1904 in the opening game of its tour. Although the weather for the game was fine, snow had fallen earlier in the week and had to be cleared from the playing field.

Fortunately for the home team the snow had not been completely cleared from the in-goal area. Their only try was scored when a defender tried to kick the ball dead only for it to hit the snow and stop. Future All Black Bob Deans dived on it to score. However, the conversion failed, and Great Britain won 5-3.

A year later, Deans scored the controversial try that was disallowed when the 1905 All Blacks suffered their only defeat, losing 0-3 to Wales.

While snow occasionally comes to the house of rugby, rugby sometimes goes to the house of snow. In Antarctica there is an annual rugby match between the scientists at Scott Base and those at McMurdo.  Played on a groomed snow surface on top of two metre thick sea ice the Ross Island Cup has been won by New Zealand for 27 years straight. The New Zealand supporters distribute “Rugby 101” leaflets to the US supporters to help them understand the rules.

Closer to home is the Glacier Country Cup disputed annually by seven aside teams the Cunning Foxes and the Franz Josef Eagles on a pitch 2340 metres above sea level. The players, crowd, goalposts, touch-lines and try-lines are all carried up by helicopters.

As winners of the latest match, The Cunning Foxes, hosted a Spanish women’s team, Unio Esportiva Santboiana from near Barcelona. The visitors carried the day with a running game the locals could not match. However, the Spanish women did not arrive in New Zealand entirely ignorant of our style of rugby as the sporting director of Unio Esportiva Santboiana is the former All Black hooker Bruce Hemera.