Rugby and fog do not go well together. Fortunately, in the days when rugby was played in the afternoon, they did not meet up much, except for the occasional test in Scotland when the All Blacks disappeared into the “gloom” as they scampered in a late try.

However, the introduction of night-time rugby gave fog a chance to get on the field for some game time. Especially in the United Kingdom, where evening games sometimes have to be cancelled when fog turns up.

In New Zealand, fog showed us what it could do when it rolled into Christchurch an hour before the kickoff of the Super 14 final between the Hurricanes and the Crusaders on 27 May 2006.

As a television spectacle the event was seriously compromised. The cameras down at ground level sometimes got a reasonable view but those high up were mostly obscured. Nicknamed “gorillas in the mist” the contest was won 19-12 by the Crusaders.

The Hurricanes, who do not have much fog of their own as it is usually too windy in Wellington, also got to suck up some Hamilton fog at the end of the Super 14 semi-final against the Chiefs in May 2009, which they also lost. Situated on a river, with swamps nearby, Hamilton is the most fog prone major city in New Zealand. After Hamilton, Christchurch is the next foggiest because it is close to the sea, so the air is often very humid.

Fog formation is helped when there are a lot of condensation nuclei in the air. Many of these come from tiny plants in the sea known as phytoplankton. When tiny animals, known as zooplankton, nibble phytoplankton the chemical dimethylsulfoniopropionate is released into the water. There it changes to dimethyl sulphide (DMS) which gets into the atmosphere when breaking waves throw small water droplets into the air, where they evaporate.

In the air, DMS changes to four different chemicals, three of which act as cloud condensation nuclei. DMS also helps make the characteristic smell of the air at the beach. 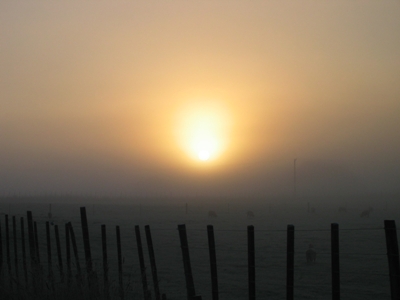 Smoke particles can also act as condensation nuclei. Indeed, the celebratory fireworks after the Crusaders victory resulted in a temporary thickening of the fog in Christchurch. During the Napoleonic wars so much smoke was produced by the massed cannon-fire that fog would sometimes envelope the battle field giving rise to the term “the fog of battle”.

Before the clean air laws were enacted, smoke from coal fires and industry used to cause the famous pea-soup fog in London. In December 1952, a notorious fog lasting for days was blamed for 4000 fatalities, mostly from bronchitis and pneumonia. Breathing this particular fog actually caused pain as a portion of the 1000 tons of dirt particles suspended in the London air was sulphur dioxide which combined with water droplets and oxygen to form sulphuric acid.

Some playing-fields in Scotland have underground heating to prevent the soil freezing when frost strikes but there is not much you can do to prevent fog. During the Second World War a lot of effort went into discovering a way of clearing fog from airfields.

The only method that worked, and then only temporarily, was burning petrol sprayed from long pipes either side of the runway so that planes landed between walls of flame. But at nearly 30,000 litres of petrol per landing, it was prohibitively expensive.

Fog is just cloud resting on the ground, and clouds are often found resting on the mountains. So even before night rugby came to New Zealand there was one place where fog frequently turned up before game time and that was the coal mining settlement of Denniston, situated on a plateau 600 metres above sea-level on the South Island’s West Coast.

Although good for fog, Denniston was not a particularly good place for soil and grass. The rugby ground had been bulldozed out of rock and was covered in new load of sand brought up from the beach at the beginning of each season.

Rugby in the fog had certain disadvantages. A ball kicked high in the air, for example, would disappear and players have to wait around for the telltale thump to discover where it came back down.

There was, however, some home advantage. Visiting teams found playing in the persistent fog somewhat confusing, and if the game was going badly for the home team an extra player could be slipped on in the backline to stiffen the defence.

Nor was this astute use of local conditions restricted to the rugby team. An excellent soccer team from Millerton was once unable to make headway against Denniston until the fog lifted, revealing that Denniston had four extra players on the pitch.