A plaque near the aircraft reads: "The aircraft displayed above you is the Percival Gull monoplane in which Jean Batten, New Zealand's most famous aviator, made her historic solo flight from London to Auckland in 1936. The elapsed time of the 14,224 mile flight was 11 days, 45 minutes..." The plaque goes on to describe a little of the life of Jean Batten and her achievements. I wasn't previously aware that the international terminal is actually named in her honour.

I have worked in aeronautical meteorology for many years, and am aware of the challenges in providing good "met" advice to aircrews. The 3-D nature of our atmosphere can make the air motions and distributions of water in its various forms incredibly complex.

I can hardly imagine what it must have been like, over 80 years ago, to travel by air for such a long distance through inevitable periods of difficult weather conditions. Even in the 21st century, with great advances in meteorological observation and forecasting systems, the weather can be a real hazard for aviation. For example, there are thunderstorms with their hail, poor visibility, electrical activity and down-bursts. And there is severe turbulence and in-flight icing to avoid, as well as fog with its associated very poor visibility and, in some parts of the world, violent sand-storms and dust-storms.

Before her historic voyage in 1936, Jean Batten travelled through New Zealand using weather information obtained from our then Director of the New Zealand Meteorological Service, Dr Edward Kidson. In our archives we hold a precious letter from her, thanking the Director for his help with aviation weather forecasts. 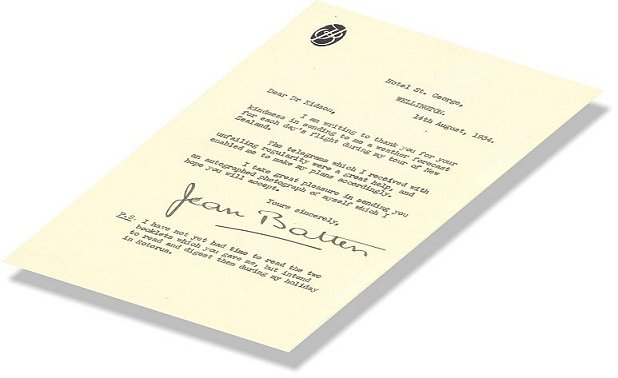 Dear Dr Kidson, I am writing to thank you for your kindness in sending to me a weather forecast for each day's flight during my tour of New Zealand.

The telegrams which I received with unfailing regularity were a great help, and enabled me to make my plans accordingly.

I take great pleasure in sending you an autographed photograph of myself which I hope you will accept.

P.S. I have not yet had time to read the two booklets which you gave me, but intend to read and digest them during my holiday in Rotorua."

I would love to see what these weather forecasts contained as they must have been based on very limited information but, to the best of my knowledge, they sadly no longer exist.

If you're passing through the international terminal at Auckland Airport, do have a closer look at the Percival Gull towards the departure lounges. And have a look at "The Jean Batten Story" display of memorabilia on the 2nd floor, but you'll have to see it before you go "airside" through the security checks. It gives a fascinating insight into our "most famous aviator".