You’ve probably heard the phrase ‘heat wave’ bandied about in the news, and perhaps wondered what exactly it means. Does one hot day constitute a heat wave? And how hot is hot? Does New Zealand really get that many heat waves? If you’ve ever found yourself wondering about these things, then look no further!

Southland and parts of inland Otago and Mackenzie Basin were the most likely areas to meet the definition of a heat wave over the week starting 28th October, with forecast temperatures for Wanaka, Gore and Invercargill all meeting the criteria according to forecast temperatures at the start of the week.

Of the places listed above, the warmest temperature predicted over the week was just 24°C, which some of you may not think is particularly ‘hot’. Indeed, it was never looking like a record breaker (Invercargill looked to be getting the closest to its October record of 25.6°C, and came very close with a high temperature of 25.4°C recorded on Monday 30th October). However, what was unusual was the length of time that these warm temperatures were expected to persist. Lengthy spells of warm or hot temperatures such as this are fairly rare in New Zealand. 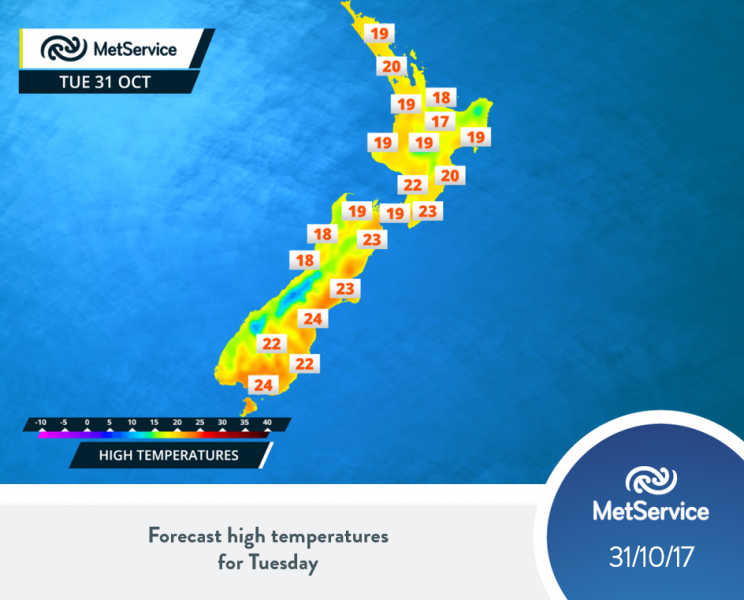 So what was the of cause of these persistent warm temperatures? High pressure sitting out to the east of New Zealand held its position during the week starting 28th October, meaning that the weather situation did not change much. This is called a ‘blocking high’. The high pressure directed a northeasterly flow over New Zealand, bringing air down from the north, near the tropics. 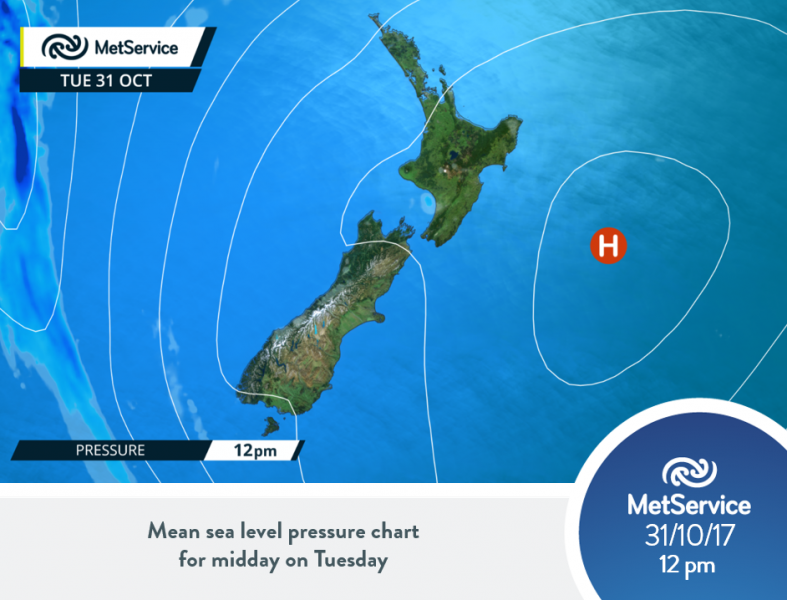 The image below (created using NOAA’s Air Resource Laboratory) shows where the air came from at midday on Tuesday 31st October 2017 over Invercargill (blue line) and Alexandra (red line). The blue line shows that the air arriving in Invercargill on Tuesday was sitting up near latitude 30°S, near the tropics, three days earlier. Also notice that in the final leg of its journey, the air had to cross the Southern Alps – this helped to dry and warm the air further, and is an example of the "Foehn Effect". 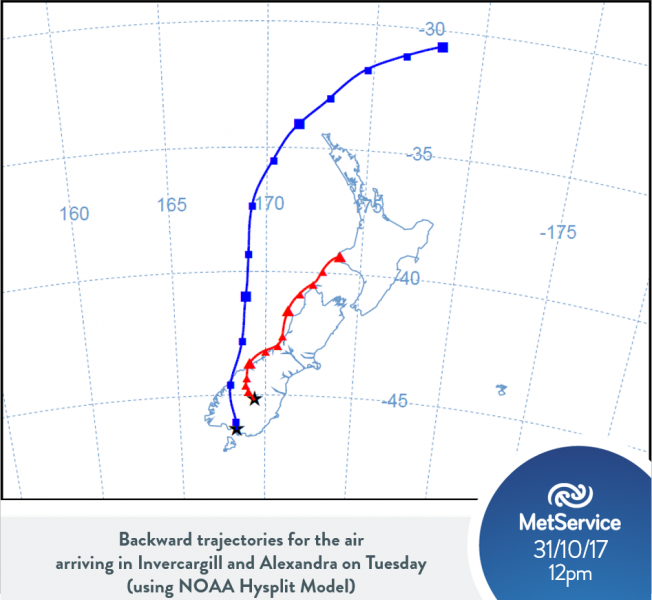 So how hot did it actually get during the week in question?

Wanaka, Gore, and Invercargill all exceeded their average high temperatures by five degrees or more for five consecutive days (in the case of Gore, they managed to reach six days)! So all three of these locations did experience a heatwave, by definition. Alexandra was expected to not quite reach temperatures warm enough to count as a heat wave, compared to their average daily maximum temperatures for October and November. However, on the 31st of October and 1st of November, Alexandra got slightly warmer than predicted (topping out at 27.5°C on the Wednesday, and making it the hottest place in the country). This meant that those in Alexandra also experienced a heatwave. Dunedin also got slightly warmer than expected, and managed to get five consecutive days with high temperatures five degrees above average.

So in summary, one hot day does not make a heat wave! However, you will now be able to whip out the barbecue and confidently tell your friends and neighbours how hot is has to be to make a heat wave!