The Waikato may be our longest river, but the Clutha is swifter, has the largest catchment and carries the most water. With its headwaters in the rain-factory of the Southern Alps, the Clutha also produced, in 1878, one of New Zealand’s greatest floods. The stage was set when heavy snow fell over Otago for several days in early August. Snow lay 45 centimetres deep over paddocks on the lower Shotover and two to three metres deep on the ridges. In one gully in the Carrick Range near Cromwell, snow drifted 25 metres deep. Days of bitter frost followed, turning the top of the snow into a layer of hard ice that the weak winter sunlight bounced off ineffectively. On one sheep-run, 60,000 sheep died. The danger of flooding from a quick thaw was clear. A letter published in the Clutha Leader warned residents of Balclutha to be ready to evacuate on notice telegraphed from towns higher up the river.

On Tuesday, September 24, warm north-westerly winds set in, along with 36 hours of torrential rain in the Alps, followed by another burst for 16 hours on the Saturday. Snow began to melt and the river to rise. Widespread flooding occurred in central Otago. Farm buildings were submerged to their rooftops and rivers filled with dead sheep and horses, timber from farms and mine workings and trees a metre in diameter. Lake Wakatipu rose to its second-highest level on record.

Partially submerged buildings in Queenstown were wrecked as waves drove floating timber like battering rams through walls. Word was telegraphed to Balclutha and people began to evacuate. Early hopes that the river would stay out of the town were dashed as the flood rose over a metre deep among the houses. The large island of Inch Clutha, formed by a split in the river just below Balclutha, was also mostly inundated. 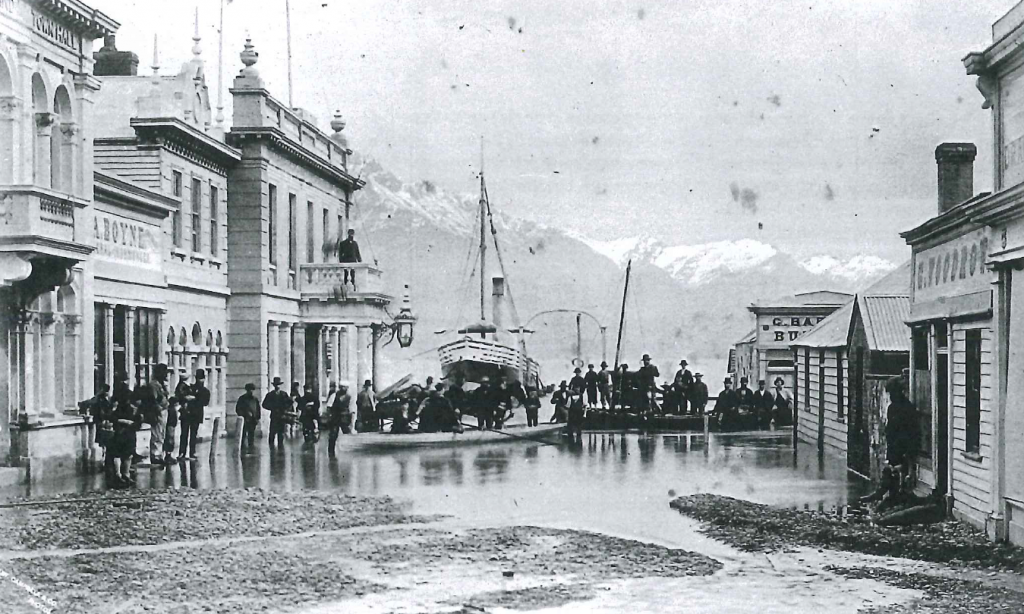 As the Clutha swelled, it began to threaten the bridges upriver. At Roxburgh, the water level approached the peak of the arch of the new laminated wooden bridge. Floating debris contributed to turning the bridge into a partial dam, with a drop in water level of one and a half metres between the upstream and downstream sides. On September 29, the bridge further upstream, at Clyde, collapsed and the wreckage floated down to Roxburgh. When it struck the bridge there, it too gave way. The combined wreckage of the two bridges now headed downstream towards Balclutha. On the way, it snagged on the river-bank and two men secured it with a rope. While they were away getting more rope, the wreckage broke free and set off again.

People in Balclutha had been warned, and waited in trepidation for the collision with their own bridge. When the wreckage hove into sight on the Monday morning, there was a brief moment of hope when it snagged on some willows. It soon came free, but fortunately the willows had turned it parallel with the flow of the river. As it approached the Balclutha bridge end-on, the tangled mass of timber was sucked into the accelerating flow between two piers and, to the cheers of the gathered crowd, shot through without touching the bridge supports. The wreckage did collide with the railway bridge downstream, but this had solid concrete piers encased in steel and was unharmed. As the waters receded, it seemed as though the Balclutha road bridge would be spared. However, heavy rain fell on October 4 and again a week later, returning the river to near-record levels. Finally, on October 13, the Balclutha bridge succumbed to blows from debris and collapsed.

Because of the timely evacuation, there was only one death in Balclutha. On October 6, a carter drowned in a three-metre hole the river had dug in the town. A man exploring the receding floodwaters on horseback had a lucky escape when his horse stepped into another hole hidden by the water. After revolving gently once, horse and rider began to float downstream, but after travelling some distance, the horse managed to grab the side of a dray with its teeth. The rider was able to dismount and clamber into shallower water and the horse followed.

A floating log collided with the house of Mr Rehberg, driving it off its foundations. As the house floated downstream, he clung to the roof, along with his housekeeper, crying out for help. Eventually chased by a boat, they were both rescued about 20 minutes before the house was carried out to sea. The schoolhouse on Inch Clutha was also carried out. As the Clutha powered to the coast, it cut a new channel and filled in the old. Consequently, Port Molyneux, from where paddle steamers had run a service up to Balclutha, ceased to be a port. On Inch Clutha, sediment dropped by the flood raised the level of farmland by more than two metres.

The Clutha was not the only river affected. Rivers in Southland flooded many kilometres wide, and there was another fatality when a farmer, stranded on a haystack, drowned attempting to reach dry ground. Canterbury rivers were also in flood, covering farmland, drowning stock and undermining bridges. The flow from Lake Tekapo into the Waitaki River has been estimated by hydrologists to occur just once every two thousand years.

The snowfall of 1878 appears far greater than anything in the 20th or 21st centuries and may not be repeated in a warming world. But rainfall rates are expected to increase. In November 1999, heavy rain in the Alps raised Lake Wakatipu, breaking the record level of 1878 by 15 centimetres. Although the flow of the Clutha was less than in 1878, flooding in Alexandra was worse because sediment building up behind the Roxburgh dam had raised the riverbed. Our most powerful river remains a danger to those living nearby. (Originally published in New Zealand Geographic, November 2013)