Our weather in New Zealand is greatly modified by the shape of the land. There are many parts of the country where the air is channelled through gaps in the terrain, and I thought I would write a little about this. Especially since it relates to the thread of my earlier posts on wind.

I was at a school activity last week with one of my daughters and, when it was time to leave, a couple of hundred people had to exit through a single door. It was a classic bottle-neck effect: we started slowly towards the door, accelerating as we got closer and closer, then quickly went through followed by an equally rapid deceleration outside the building. You've probably noticed this yourself when leaving a venue with a lot of other people at the same time, e.g. exiting a movie theatre or sports event.

Here's a graphic that illustrates the effect - perhaps you can think of other everyday situations where this process occurs.

As I indicated above, there is a meteorological application of this effect when air is forced through a narrow gap between individual hills or, on a grander scale, through passages between mountain ranges. Examples are between North and South Islands, between South Island and Stewart Island, and through the Manawatu Gorge (although this is a complex example due to the Puketoi range downstream).

Another perhaps less obvious example is the channeling that occurs between Banks Peninsula and the eastern foothills of the Southern Alps - this is one of the reasons that Christchurch is predisposed to its nor'easter wind.

By the way, in the animation above, I have intentionally drawn flattened objects to represent the moving air. This is to recognise that the troposphere (the part of our atmosphere in which our weather occurs) is very thin compared to the size of the Earth.

Have a look at the two images below, based on satellite-derived elevation data from the NOAA National Geophysical Data Centre. In the first image we see the familiar outline of New Zealand... 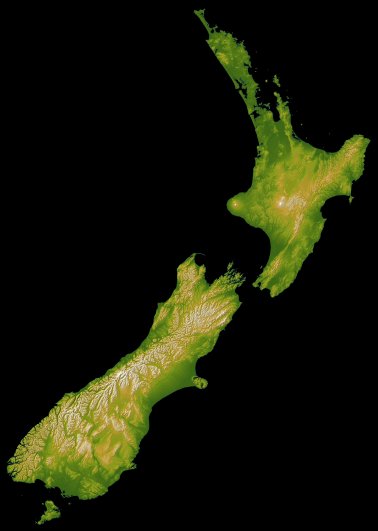 ...but in the second image I have blacked out the low-lands to help highlight the high ground responsible for modifying the flow. 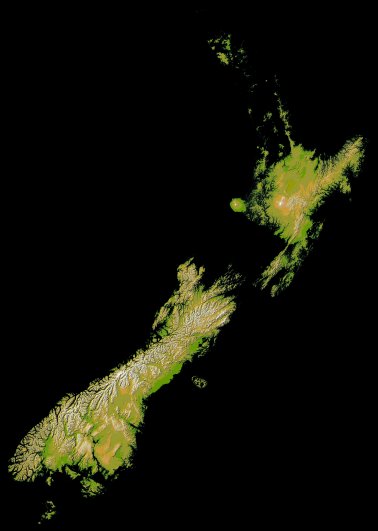 NZ topography with low-lands blacked out

Comparing these two images we can appreciate where the terrain is likely to channel and hence speed up the wind. The areas I gave as examples above are all gaps (of various sizes) in the high ground.

As an interesting variation, the bottle-neck effect also occurs to some extent when the flow is around the side of a single hill or range. For example, the wind will speed up around East Cape (top end of Gisborne) and Puysegur Point (bottom end of Fiordland) in northwesterly and southeasterly flows.

There is a complication to all this. We have to remember, as I mentioned in my previous post about the Great Northwesterly Storm of August 1975, that the wind blows in three dimensions, so air may also rise and fall as it goes through the gaps. And, as in my post about the Wind-sock of the Lower North Island, the wind will not only be stronger in the bottle-necks, but also generally over the high ground.

I think the maps also show just how "bumpy" the NZ topography is, which partly explains why we get such a variety of weather conditions in this country. I hope you've found these ideas thought-provoking - I don't seem to be running out of things to discuss about wind!