An explanation of wind speeds and the Beaufort Scale

Sometimes in MetService forecasts, you will see a forecast for “fresh northerlies”. But what exactly does the word ‘fresh’ mean? For many people, the word ‘fresh’ carries connotations of cool or clean air (eg the phrase ‘fresh air’). However, the word ‘fresh’ also has a more technical definition, that comes from the Beaufort Scale.

Before we look at the Beaufort Scale, we first need to understand the difference between mean wind speeds and gust speeds. Wind speeds are not constant – they are changing all the time. If you measured the wind speed at one second intervals, you would often get different measurements from second to second.

When there have been extremely strong winds, you will often hear reporters talk about the peak wind gust. However, gusts are only part of the picture. Below are the definitions of gusts and lulls:

The third part of this puzzle is the mean wind speed. This is the wind speed averaged over a certain time interval (usually ten minutes). This is illustrated in the graph below: 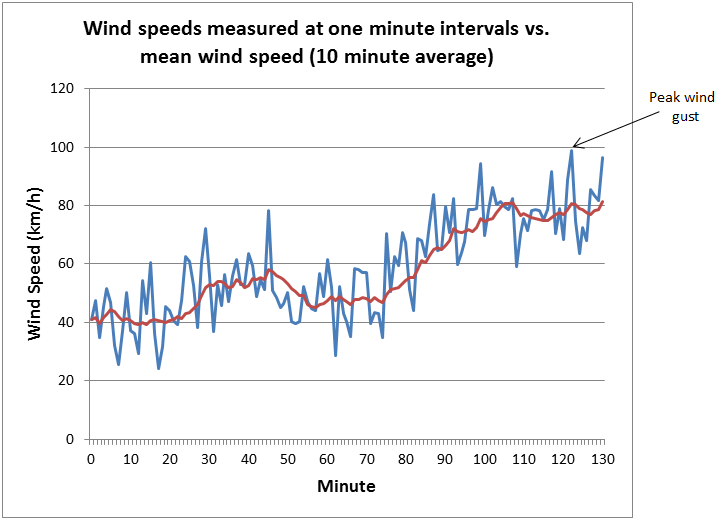 The Beaufort Scale gives us a way of describing measured mean wind speeds (in numbers) with words. It was devised by Irishman Francis Beaufort in 1805, an officer in the British Royal Navy. He wanted to create a standard scale, which would allow naval officers to relate sea conditions to a mean wind speed when taking meteorological observations. If you would like to read about how the Beaufort Scale is used at sea, you can refer back to this great blog, Sea State and Swell.

Since 1805, the Beaufort Scale has been adjusted to be used over land as well. The table below describes how the Beaufort Scale relates to the winds on land. Wind speeds are given in both km/h and also knots (a unit of measurement for wind speed, often used by mariners). 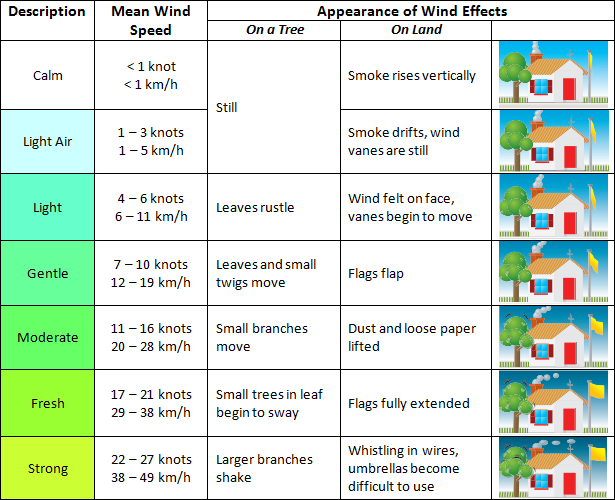 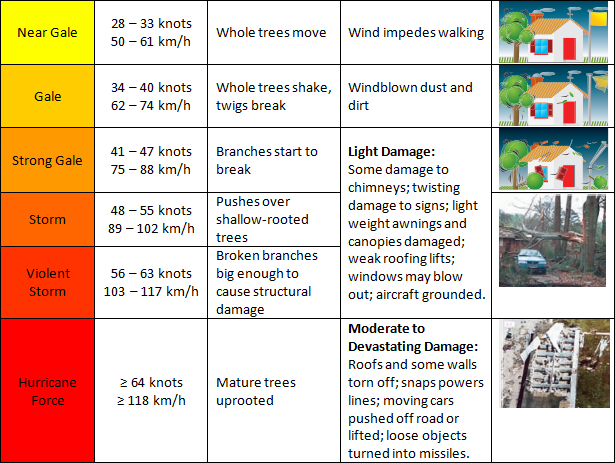 In the graphed example above, we noted that the mean wind speed reached about 80 km/h. According to the Beaufort Scale, the wind reached strong gale, even though it was gusting to higher speeds at times.

Describing the winds in our forecasts

MetService forecasters use some terms from the Beaufort Scale in our public forecasts. The terms we use include “light winds”, “gentle breezes”, “fresh”, “strong” and “gale”. When a wind direction is mentioned without a wind speed descriptor, we mean that the wind will be moderate. For example, the phrase ‘northerly wind’ would describe a wind blowing from the north, at a speed between 20 to 28 km/h.

MetService also uses another wind speed descriptor, that is not from the Beaufort Scale. You may have heard Severe Weather Warnings mention that we are expecting the winds to rise to severe gale. In New Zealand, we can often have extremely strong gusts, even if the mean wind speed isn’t exceptionally high. For this reason, the definition of severe gale takes gust speeds into account:

Why are fast winds so damaging?

where Ek gives the Kinetic Energy of a moving object (or wind), m represent mass and v represents velocity (or wind speed in our case).

The kinetic energy of the wind can be thought of as a measure of how strong the wind will feel. Note the squared term in the equation; this means that if the wind speed doubles, the wind will actually feel four times as strong! This explains why winds can cause so much more damage once they get to gale force or stronger.

New Zealand’s latitude within the “roaring forties” means that we can get some extremely strong winds. The Beaufort Scale gives us a consistent way of describing wind strengths in words, so that the public can quickly and easily interpret the wind strength when they hear the forecast. Because of this, the Beaufort Scale can come in very handy to both meteorologists and the public alike.