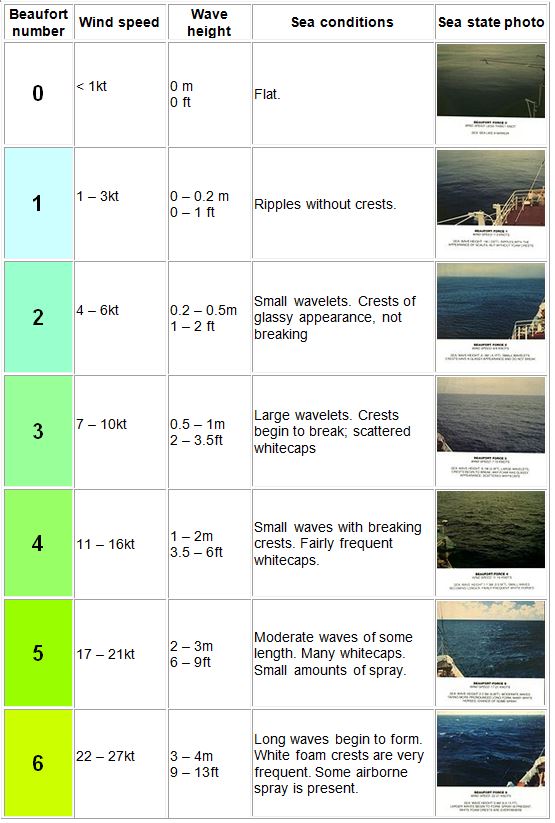 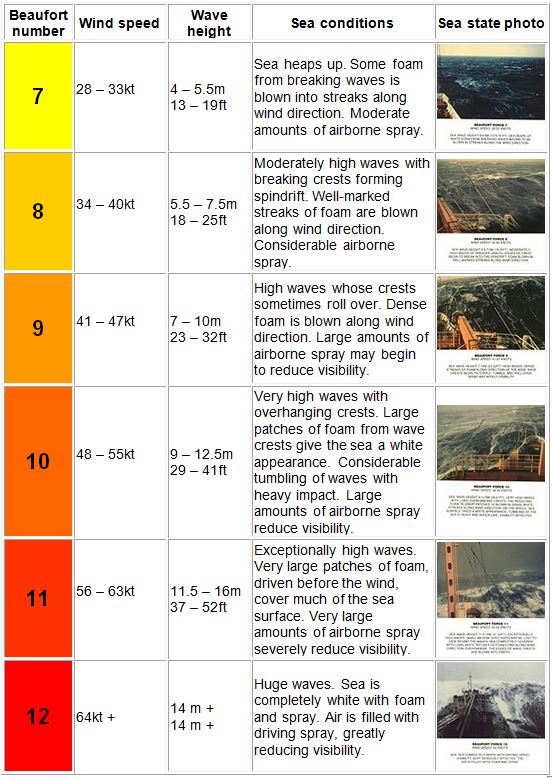 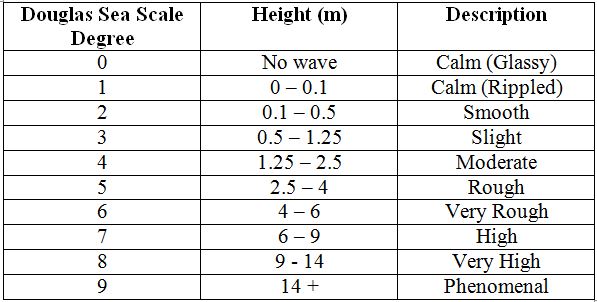 Figure 3: Douglas Sea Scale (from World Meteorological Organization)
Combining the Beaufort Scale sea state images – what a mariner would expect the sea to look like – with the expected corresponding wind speeds and the Douglas Sea Scale (figure three), you get figure four. 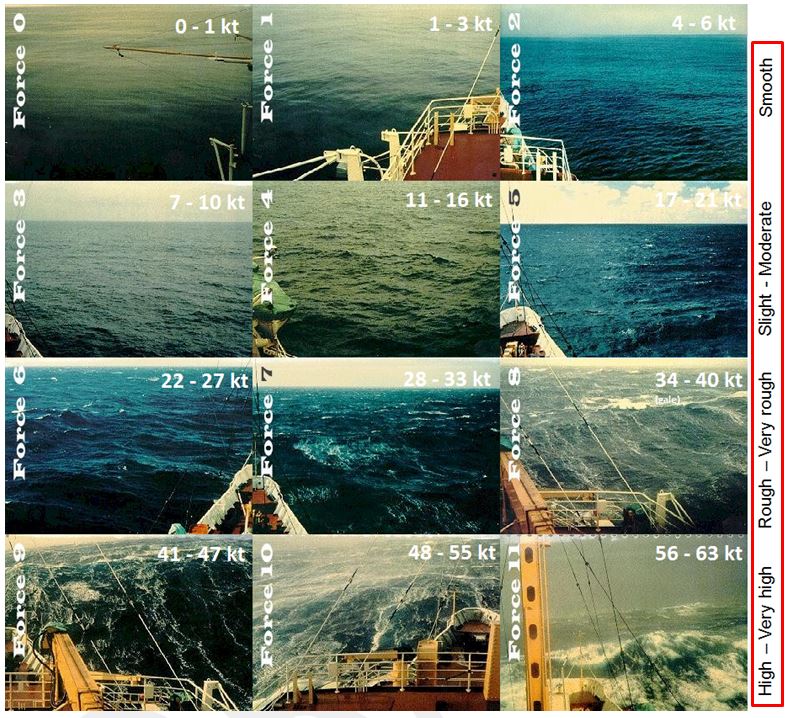 Figure 5: Sea state as a function of wind speed (MetService)
Note that wind wave heights are significantly affected by local conditions, such as whether the wind is onshore or offshore and the fetch and its duration. New Zealand’s mountainous terrain also has a large influence on the wind flow – it can vary significantly around the next headland or in the lee of the next set of hills. The wind flow, in turn, affects the local sea conditions. An offshore wind blowing from the land onto the sea is usually smooth close to shore but noticeably rougher further out because it takes a little distance for the wind to work up waves on the sea surface.  It starts off generating small wavelets close to the land, then short steeper waves and then bigger less steep waves further out. On the other hand, onshore winds do not have this fetch limitation. Depending on the wind direction, the more sheltered areas of MetService forecast areas should not be as rough as exposed areas. When interpreting the sea state in a MetService forecast, the local conditions need to be taken into consideration. 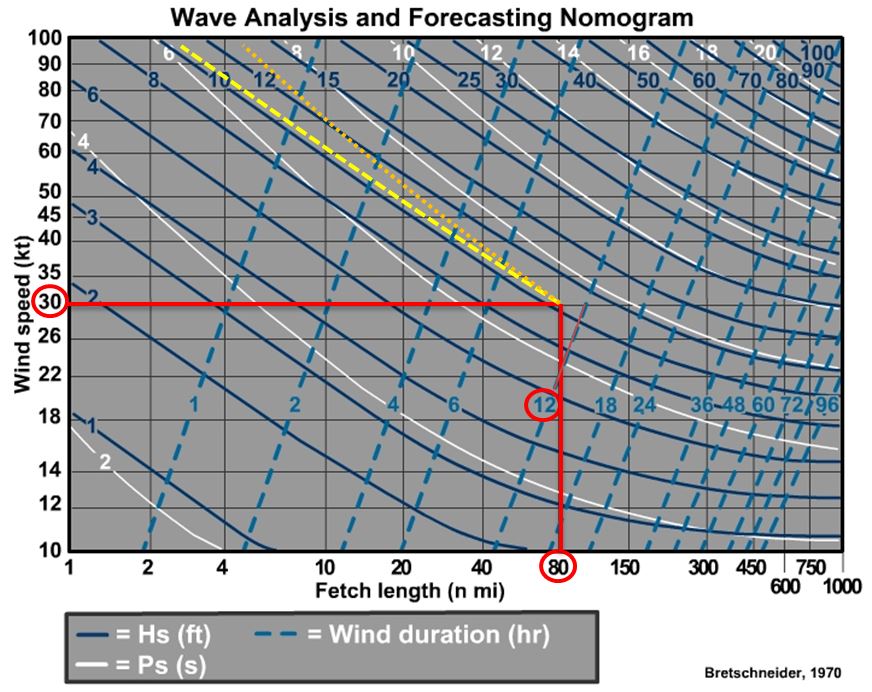 Figure 8: Example 1 Bretschneider nomogram.
Example 2: Consider a wind of 60 knots blowing over a fetch of length 600 nautical miles for a duration of 24 hours. Using the nomogram, follow the 60 knot line across until you arrive at one of the constraints. In this case, you reach the time constraint before you get to the fetch length constraint. At the intersection of 60kt and 24 hours, the significant wave is read off as approximately 45 feet/13.7 metres (yellow line) in height with a period of 15 seconds (orange line). 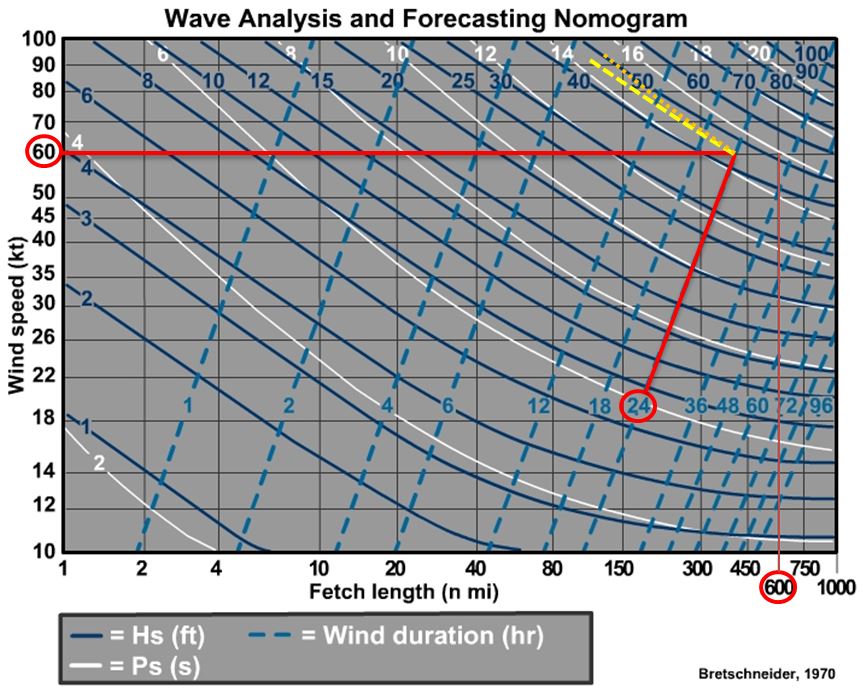 Figure 9: Example 2 Bretschneider nomogram.
At MetService we use various global wave models as swell guidance. The model with the greatest amount of data is created by the European Centre for Medium-range Weather Forecasts (ECMWF). An example of this guidance is shown in figure ten. 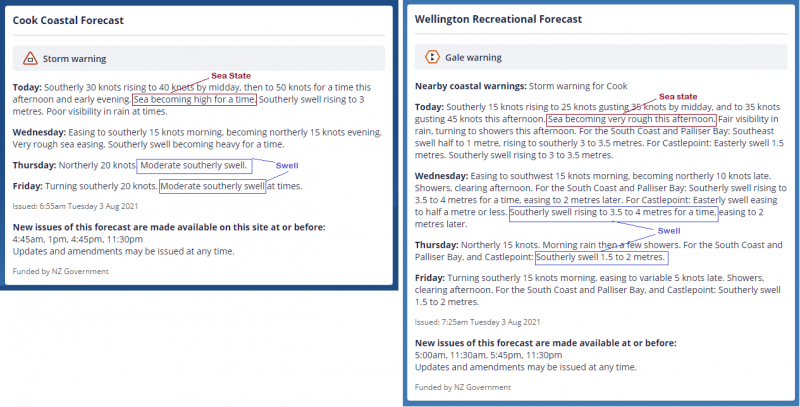