Few weather events are as dramatic, dangerous or challenging to predict as tornadoes.

On the afternoon of Tuesday 3 May 2011, a line of showers moved southwards across Northland. Ahead of this line the winds were moderate northeasterlies; behind it, they were moderate northwesterlies. Along the line, the winds converged - that is, pushed against each other. Below is a portion of a working chart for 3:00pm Tuesday 3 May 2011, drawn by one of the Severe Weather Forecasters. 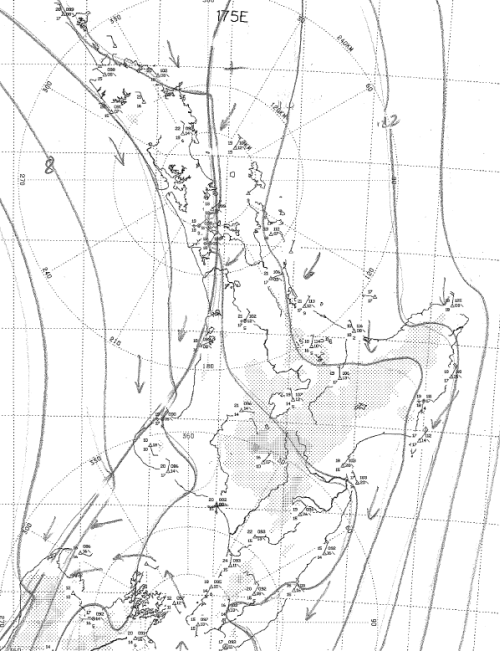 At this stage, the main line of convergence is just passing through the Auckland area but there are still areas of activity behind it.

When air gets piled together like this it prefers to go somewhere if it can, and in this case it went upwards. More about why this is important in a minute. MetService's Severe Weather Forecasters had been watching the line of showers since the day before when it was out over the Tasman Sea, and expected it to be "active" as it crossed northern New Zealand on Tuesday. Below is the Severe Thunderstorm Outlook published on www.metservice.com on the morning of Monday 2 May 2011. (This was re-issued with similar content on Monday evening and again on Tuesday morning).

Severe Thunderstorm Outlook for Tuesday 3 May, published on www.metservice.com at 10:21am Monday 2 May 2011

Around midday on Tuesday, Severe Weather Forecasters received an important new set of data from the Whenuapai balloon flight, which describes the profiles of wind, temperature and moisture aloft. Analysis of the data revealed that even more thunderstorm activity was likely in the afternoon over the Auckland region than had been previously thought, and the Severe Thunderstorm Outlook was re-issued with an increased risk for Auckland; see below. In other words, measurements of the properties of the air around Auckland revealed it was even more likely to go upwards than had previously been thought. Upwards air movement, if unchecked, leads to thunderstorms.

Severe Thunderstorm Outlook for the afternoon and evening of Tuesday 3 May, published on www.metservice.com at 12:38pm Tuesday 3 May 2011

However, the Whenuapai upper-air data also showed that the air around Auckland possessed little of the tornadic tendency (for the technically minded, low-level shear and low-level helicity are important factors) that it exhibited so tragically and destructively just a few hours later. That is, using high-quality facts from very close by, together with weather model data for the Auckland area, the Severe Weather Forecasters investigated the possibility of tornadoes over the Auckland area and decided there weren't enough factors favouring this.

So why was there a tornado? The low-level convergence mentioned a few paragraphs back was a major contributor. The strong tendency of the air around Auckland to ascend was another. Together, though, these spell thunderstorms - and only a small proportion of thunderstorms have tornadoes associated with them. The third factor is how the air near the Earth's surface in the Auckland area managed to acquire so much corkscrew-like motion (helicity) so quickly. We've not yet looked into this in depth, but it seems certain that the local geography in the area north of Albany played a significant part. And a correspondent who witnessed the development of this tornado, David Haysom, thinks similarly. Excerpts from David's email to us are below.

"One of my work colleagues saw the tornado form on a block of land next to our office that is exposed clay. (Corner of Corban Ave and Munroe Lane). At that stage it was just a flurry of leaves in a circular motion. This is about 200 metres from a large escarpment to the North. It then moved southwards and when I saw it, it was only a couple of metres high and not much energy.
100 metres further on it was about 5 metres high. By the time it reached the third road parallel to our office it was about 12 metres high and had turned white. (Don McKinnon Drive).
Above the mall was intensely black cloud and it headed for this growing rapidly in height and becoming very opaque which I guess was the water from the lakes.
It went across the lakes to the mall flattening trees instantly as it went or ripping them out.
It hit the mall on the corner that has the cinemas and it looked like an explosion of roofing iron. Given the similar event in Albany 20 years ago, I think it is the Oteha Valley Rd escarpment that causes it. As the wind comes down it would get a twist as it exits the motorway gradient which is lower than the escarpment to its west."

So ... could MetService have forecast this tornado?

Tornadoes like this – which is the most destructive seen in New Zealand for some years – are dramatic but very localised: they last only a few minutes, and they affect relatively small areas. From David Haysom's account above, the distance from the corner of Corban Avenue and Munroe Lane to the shopping centre in Albany is about 800 metres. MetService is able to forecast the conditions favourable for the formation of (severe) thunderstorms, and sometimes we can anticipate the likelihood of tornadoes that have nothing to do with severe thunderstorms. It all comes down to being able to represent phenomena at the time and space scales upon which they occur - which in this case is a few hundred metres and a few minutes respectively. For more about this, see Chris Webster's Predictability and Popcorn blog entry. 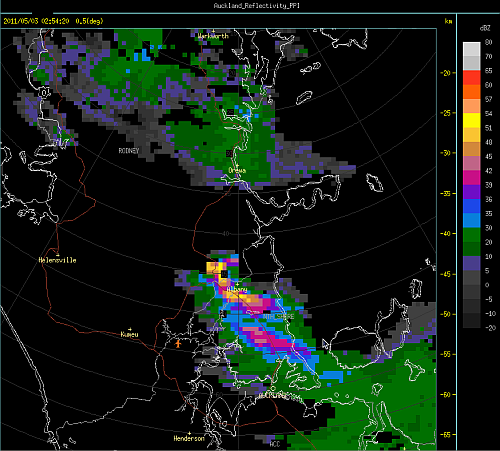 Radar reflectivity, 2:54pm Tuesday 2 May 2011. There is a hook-shaped radar echo near Albany.

And there was rotation around the hook in the "right" place (3-6 metres per second away from the radar; 0-3 metres per second towards - not exactly mesocyclone territory), as the Doppler velocity image for the same time shows (below). 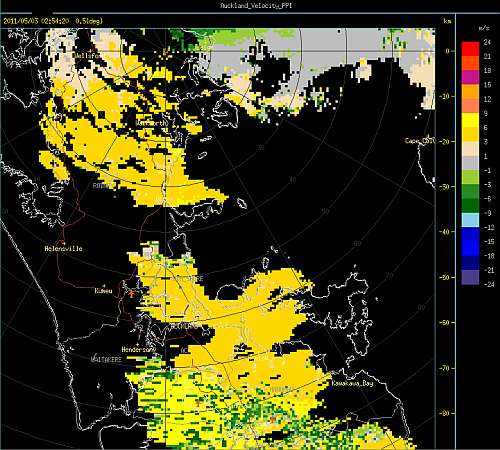 Are you doing anything about getting better at this?

Norm Henry, MetService's General Manager of National Weather Services, described MetService's advances in forecasting in a blog post on 08 April 2011. About the forecasting of small-scale severe weather, he says
"An example of a long-term research programme that has delivered direct benefit to New Zealanders is the development of the Severe Thunderstorm Warning service. This work began about 7 years ago with a detailed investigation of the climatology of New Zealand thunderstorms, with emphasis on the types of convective environments that lead to localised severe weather.

As a result, New Zealand-specific techniques to diagnose and forecast severe convective storms have been developed, along with appropriate guidance material based on observation data and MetService’s high-resolution models. MetService has also implemented state-of-the-art thunderstorm tracking software as part of its weather radar systems, allowing it to rapidly identify, track and forecast the behaviour of severe convective storms."

A little bit more about tornadoes in New Zealand

Tornadoes in New Zealand are quite different from those that occur in the midwest of the United States primarily in the warm part of the year. In New Zealand, tornado occurrence is primarily related to convection along strong cold fronts - and thus they are largely a "cold season" phenomenon.

Some notable recent instances include the Waitara tornado of 15 August 2004, the Greymouth tornado of 10 March 2005 (very likely a cold season event, even though it occurred in March), the New Plymouth tornadoes of 3-4 July 2007 and the Cambridge tornado of 17 October 2008.

The Albany tornado of Tuesday 3 May 2011 wasn't of this type. Of course, for those it affected this is nothing more than academic. It is tragic that there has been a fatality, a number of injuries and considerable property damage. As many have already said, it was a miracle that there was only one death.