This blog post is the first in a three-part series discussing verification of MetService forecasts. Here, we present the method used for verifying rainfall in city forecasts, along with some examples.

From these, indications of accuracy are readily obtained:

For good forecasts, POD, SR, Bias and CSI approach a value of 1.

In the verification scheme:
-  “Tomorrow” is the 24-hour period between midnight tonight and midnight tomorrow
-   The forecast is considered to be of preciprecipitation when the accompanying icon (as it appears, for example, in the city forecast for Auckland) is any one of “Rain”, “Showers”, “Hail”, “Thunder”, “Drizzle”, “Snow”, or “Few Showers”
-   Precipitation is considered to have fallen if the automatic weather station records any precipitation amount greater than zero.

​The scheme operates automatically – that is, there is no input by MetService staff.

POD, SR, Bias and CSI can be geometrically represented in a single diagram, and therefore simultaneously visualised.
The diagram below shows the accuracy of the forecasts issued late morning, for tomorrow, of precipitation, for the 32 cities verified, during September 2010. 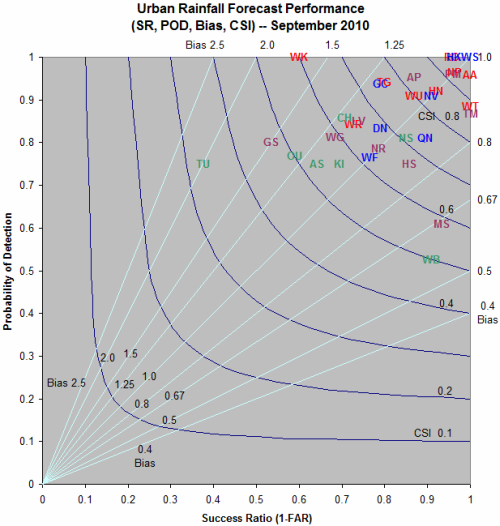 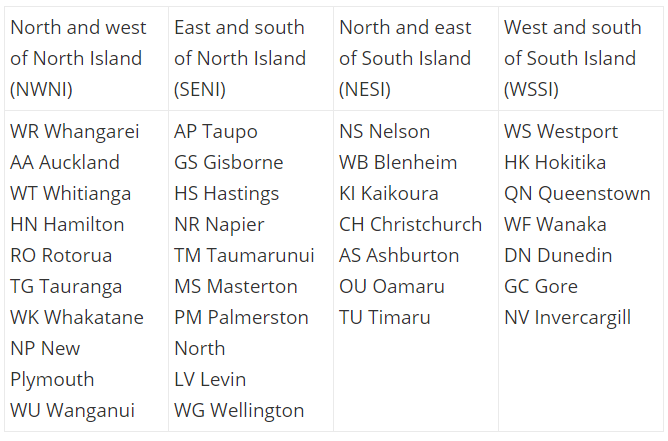 From the above diagram, for example:

It’s also useful to see performance when the cities are grouped into the geographical areas described in the key above and overall. The diagram below shows the accuracy of the forecasts issued late morning, for tomorrow, of precipitation, for the 32 cities verified, during September 2010. 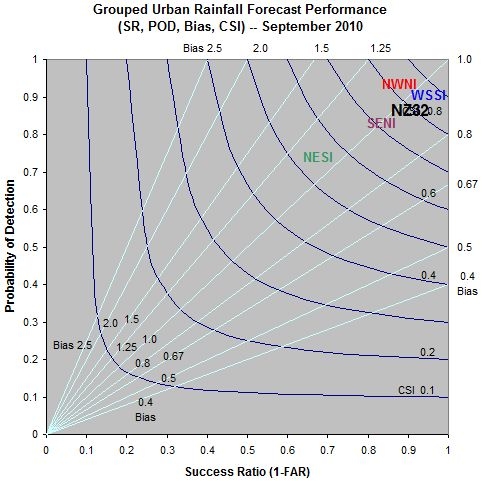 In this particular case, forecasts for the group of cities comprising the north and east of South Island (“NESI”) didn’t verify as well as for other places, with a Probability of Detection of about 0.75 and a False Alarm Ratio of about 0.3.

Further, it’s interesting to look at results dating from the implementation of this particular scheme in March 2009 through to 28 October 2010. Probability of Detection hovers at around 0.8 ± 0.15 (80% ± 15% in the graph immediately below). The False Alarm Ratio has shown a steady decline – in other words, predictions of rainfall in the city forecasts have improved in accuracy over the last year. 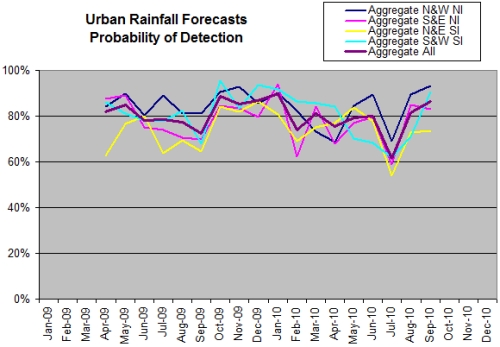 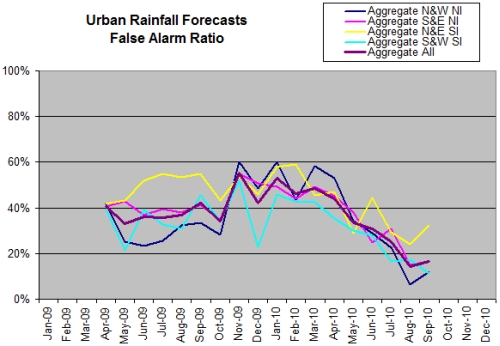 MetService's performance target for the forecast of precipitation in city forecasts is a combined POD greater than 0.77 for the 2010/11 financial year, increasing to 0.80 for the 2011/12 financial year.

Even across small distances, there can be significant variations in rainfall during the course of a day. Thus, the observation point used to verify the forecast for a given place may or may not fairly represent the rainfall there – or may be a good indication in some weather situations but not in others. MetService observation sites are commonly at airports, which in general are at least some distance from the city or town they serve.