Here's a couple of close-ups of Tropical Cyclone Bune as it passed near Raoul Island overnight Monday. 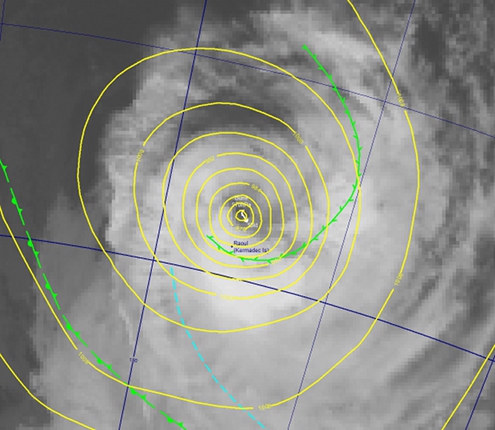 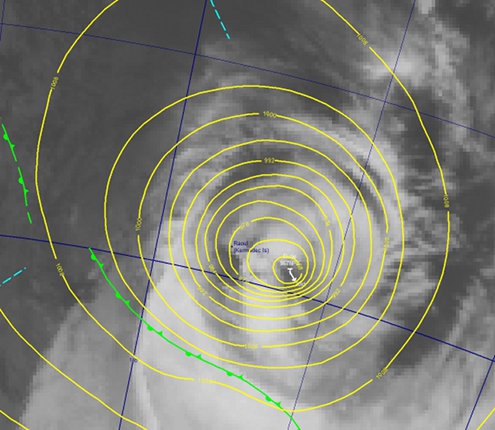 The centre of Bune has passed a few tens of kilometres to the east of Raoul. The pressure at Raoul "bottomed out" at 972.5 hPa at 11:00pm Monday; at this time, Bune's central pressure was around 967 hPa. 108 mm of rain was recorded at Raoul between midday Monday 28 March and 6:00am Tuesday 29 March. Most of this (86 mm) fell between 4:00pm and 8:00pm Monday, as Bune's main feeder band (for more on feeder bands, see Bob McDavitt's blog on tropical cyclone Yasi), wrapped around the south of its centre, passed across the island. The graph below shows the hourly rainfall and mean sea level pressure from 9:00am Monday 28 March to 7:00am Tuesday 29 March. 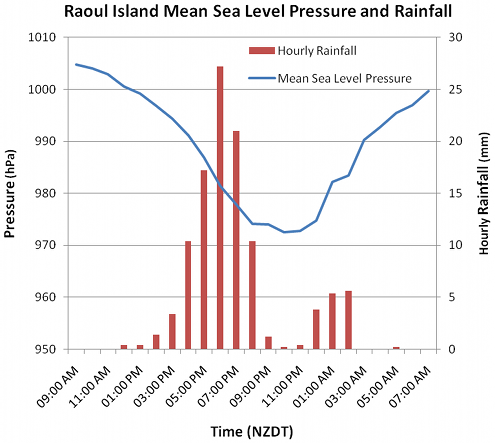 So ... how windy did it get? The graph below shows mean wind and gust speed at Raoul from 9:00am Monday 28 March to 7:00am Tuesday 29 March. The wind was from the eastsoutheast through to about 10:00pm Monday, with mean speed increasing during the afternoon and early evening from about 15kt (about 30km/hr) to 39kt (about 70km/hr). Wind speed decreased after about 7:00pm Monday, with the winds becoming fairly light late in the evening when Bune passed closest to Raoul (and when, as noted above, Raoul's pressure reached its minimum of 972.5hPa). This period of light winds late Monday evening also coincided with the cessation of the heavy rain: in other words, the feeder band has passed across the island, and Raoul was close to the eye for a few hours. 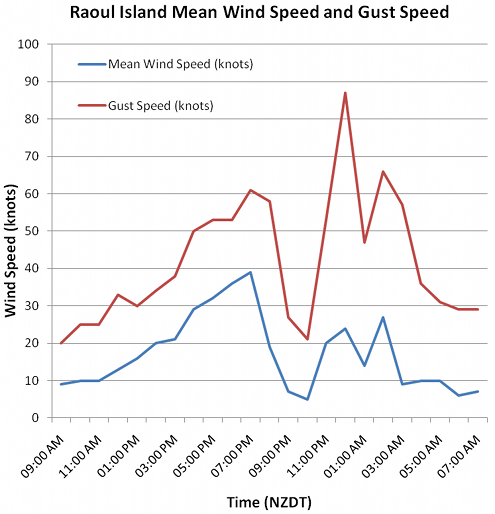 After about 11:00pm Monday, when Bune was moving away from its point of closest approach to Raoul, the wind at Raoul tried to blow from the southeast, but was all over the place for a few hours, as shown in the table below. Of particular interest are the gust speeds: they are generally much larger than might be expected. Sometime in the hour between midnight and 1:00am, when the mean wind speed was a shade over 20 knots (about 35km/hr), there was a gust of 87 knots (about 160km/hr). Wow.