Tropical Cyclone Yasi formed north of Fiji on Sunday 30 January 2011 and was named by the Tropical Cyclone Warning Centre of the Fiji Meteorological Service. Yasi is a girl's name and also the Fijian word for sandalwood.

As Yasi moved westwards  and absorbed energy from the warmer-than-normal waters of the Coral Sea, its diameter expanded to 800 km: much larger than the 200-300km typical of tropical cyclones in this part of the world.  It intensified to Category 5 (on the Australian category scale) with gales out to 250km from its centre. This was the largest category 5 tropical cyclone to cross the Queensland coast since 1918. A circle of gales 500km wide is large enough to cover most of the North or South Island.  Even so, Yasi was not the largest cyclonic circulation on the planet at the time: over the last few days, a depression over the North Atlantic brought a major winter storm to the United States. The conditions required for tropical cyclones to form are: 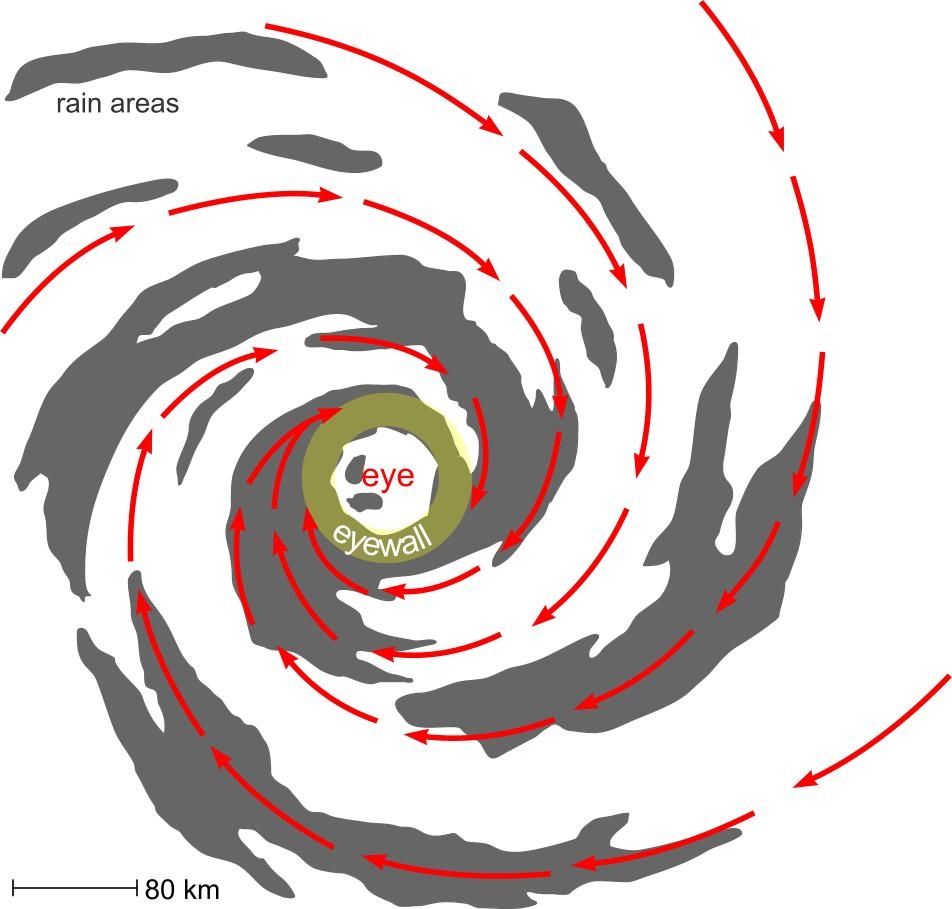 Eye and eyewall: Click on this image to read more about the structure of low pressure systems.

Just outside the eye of a tropical cyclone is a region called the eye wall, where rain and wind are at their most intense. The eye of Yasi expanded to a diameter of 100 km at one stage, which is very large. Within Yasi’s eye wall, wind gusts of  up to 290 kph and rain amounts of 300mm were reported. The track that a tropical cyclone takes is partly due to imbalances in its own symmetry and partly due to the environment around it. Yasi was embedded in a reasonably steady easterly flow aloft and this carried it along a fairly straight path towards northern Queensland. Apart from wind and rain, the other destructive component of Yasi has been its storm surge. This in itself has several components. Firstly, lower than normal atmospheric pressure near the cyclone’s centre raises the sea level. Secondly, strong winds blowing from the sea to the land generate large waves and push the sea onto the land. These latter effects are most pronounced to the left of the tropical cyclone’s track (in the Southern Hemisphere), where the movement of the cyclone adds to the wind strength. If all these coincide with high tides, the effect of storm surge is increased. Yasi weakened quickly as it moved inland. This is mostly because it became cut off from its energy source, the warm sea. But also, the low-level air in the circulation encounters more friction over land than over sea, and this slows everything down. Summer in the Australia – New Zealand region continues in a remarkable way under the influence of La Nina.