For about the last month, anticyclones have dominated the New Zealand area. Many places have had little or no rainfall since early February. 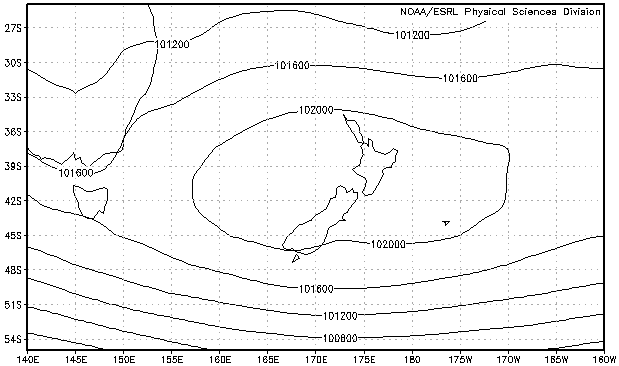 There are reasons why the weather gets into "regimes" like this. It has to do with what meteorologists call the “long waves”. If you've been reading the MetService blog for any length of time, you might notice that this article is very similar to one published in September 2010 titled "Wave Three".

The map below is one way of depicting what the average weather pattern about half-way up the troposphere (the troposphere is that part of the atmosphere in which the weather occurs) looked like over the last month or so. In this pattern, there’s nothing that looks like a high, or low, or front. But there is a bunch of wavy black lines ... which look kind of regular, but not quite. The upper ridges are marked with red dashed curves. Note that there's been one over the New Zealand area for most of the last month.

Now what if those waves could be separated out into longer ones and shorter ones, so we could see what was going on “under the bonnet”? There happens to be a way of doing exactly this; it’s called Fourier analysis.

The picture below is made from a Fourier analysis of the pattern at midnight Saturday 23 February 2013. It reveals that, in New Zealand’s latitudes, the pattern is dominated by a wave which has one ridge (pink) and one trough (blue) wrapped around the hemisphere. Most important to us is the big area of pink shading – the ridge – near New Zealand. Further south, in the Southern Ocean, the pattern has three waves with a remarkably strong ridge south of South America. 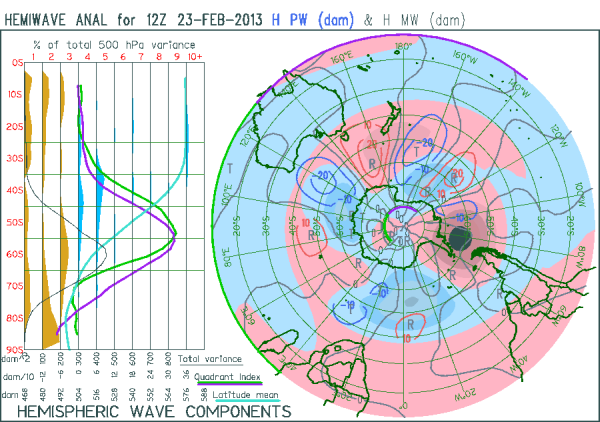 The "long" and "medium" waves about half-way up the troposphere at midnight Saturday 23 February 2013.

The picture below shows a 12-day history and 5-day expected movement of these longer waves. While shorter waves (some of them corresponding to weather features) are travelling steadily eastwards, the underlying pattern in the New Zealand area remains ridged. 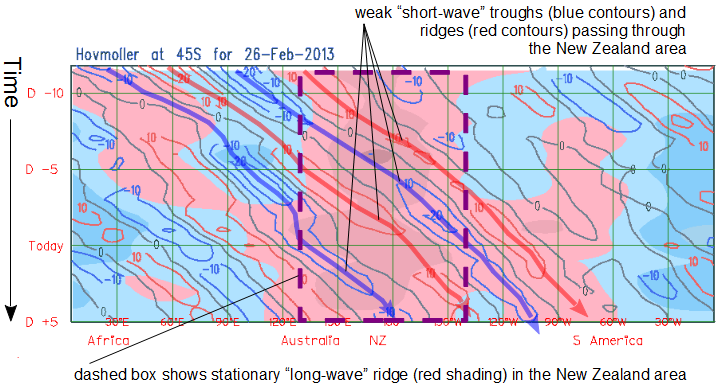