The news in late November 2009 made much of the presence of icebergs heading north out of the Southern Ocean. There is an impressive photo of one of the icebergs here. The story got me thinking again about the amazing properties of water, so I will continue the thread of a previous post by focusing on ice.

Ice in the water

Firstly, the icebergs. You may remember from school that approximately 9/10s of an iceberg is submerged in the sea, so that only a tenth is visible above. You can test this property of ice for yourself by putting an ice cube from your freezer into a glass of water. The ice will float like a mini-iceberg.

Extending this experiment a bit, if you were to take a glass of water at room temperature and warm it up, the water would expand, i.e. become less dense. Conversely, if you cooled the water it would shrink slightly, i.e. become denser. But shrinking stops at 4°C - any further cooling leads to expansion again. This is a very special property of water and is quite the opposite to what usually happens when objects cool. For example, when air cools it shrinks and it keeps shrinking the more you cool it.

Once cooling water reaches 0°C the change of phase to ice takes place and the lighter ice will float if placed in relatively heavy water.  In the real world there are some complications, for example the effect of sea-salt on the density of water, but the general principle applies.

Ice in the air

The image below is from the NASA/GSFC MODIS Rapid Response System and shows the lower South Island as viewed from the Aqua satellite in visible wavelengths of light. Invercargill is at the bottom of the image, right of centre. 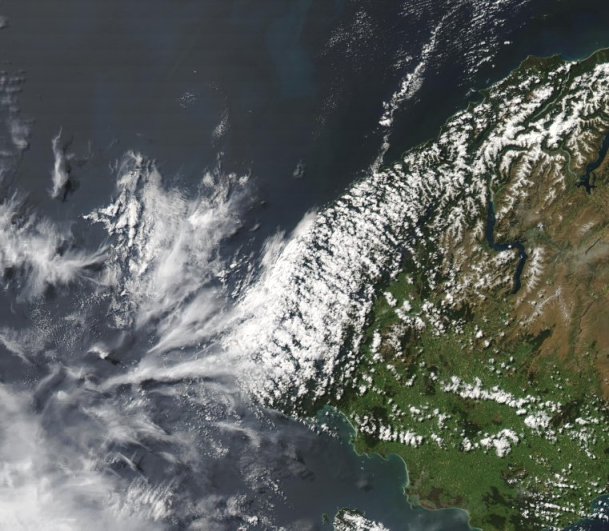 The image brings out some interesting characteristics of ice. Look at the wispy clouds just west of Fiordland. These are cirrus clouds and are made of ice crystals suspended high up in the troposphere. If you look closely you can see shadows from the clouds cast on the sea by the afternoon sun. It is the crystal composition of these clouds that gives them their fibrous or streaky appearance.

Cirriform clouds are common in New Zealand, and you can observe their texture for yourself by looking out for them high in the sky, especially when a front is approaching. There's a nice example in the photo below. You can also see them when towering cumulus clouds develop into cumulonimbus, with ice crystals making the glaciated anvil top of the cloud appear fibrous. 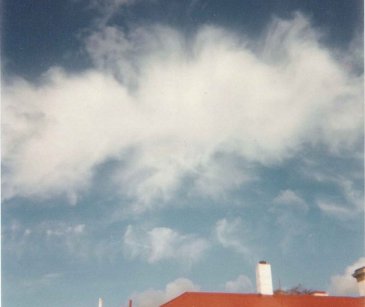 Cirrus cloud, with thin filaments at the edges

Ice on the ground

Referring back to the satellite image, in the top right of the picture there's snow on the tops of the mountains. This can be inferred from the texture of the white colouring which follows the contours of the land, a bit like branches on a tree. But over Fiordland the white colouring is not snow but cloud, consisting of water droplets. I know it's cloud from the form it takes - lines of cumulus clouds orientated towards the bottom right of the image. And there are shadows from the clouds too. At some point there is a transition between the snow and the clouds, and it is difficult to detect precisely where the change occurs. Can you?

Even though the ice (in the form of snow) and water (in the form of cumulus) look similar, I hope I've shown that the "snow form" of ice looks quite different from the "crystal form" as in the cirrus cloud. It seems that water has many fascinating aspects to its character, and I have only touched the surface :-)