Severe gales In our brief mountain forecast issued on Wednesday 11 August, MetService increased the forecast winds for Thursday over the Canterbury alps to severe gale, the top of the scale for mountains.  Indeed, the winds whistled to over 200 kph at Mount Hutt. 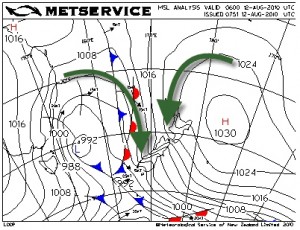 These flows combined something like the arms of a kitchen eggbeater, making an accelerating northerly wind reach the C 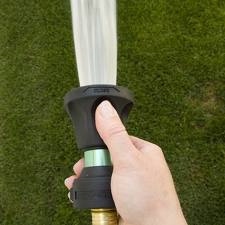 anterbury alps.  Also, the high-pressure system left behind layers of stable air which acted like a lid,  pressing down on that northerly wind as it  encountered the mountains.

When this wind found a gap between the mountain tops it shot out like water does through the nozzle of a hose on power flow. Deluging rain On Wednesday 11 August, MetService started a sequence of Severe Warning Watches and Warnings for heavy rain associated with an incoming active front.

Warnings for heavy rain were issued for western and northern areas of both the North and South Islands, as well as for Coromandel, Bay of Plenty and Gisborne mountains north of Ruatoria, with peak daily amounts of around 200 mm for the Westland and eastern Bay of Plenty ranges. 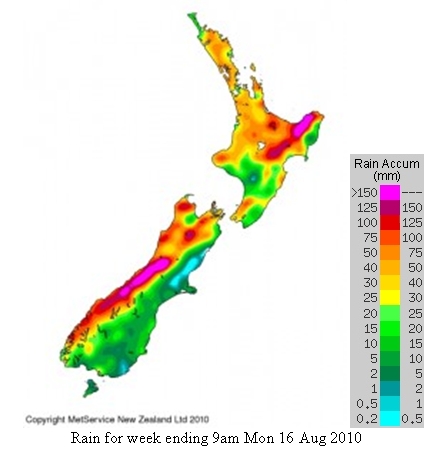 The map above shows the accumulation of rain measured in the MetService network for the week ending 9am Mon 16 August.  Most of the rain in that period was from the passing front.   MetService was picking early on that this front would be able to deliver heavier than normal amounts of rain.   This was because it was given a boost of water vapour from an unusual source ---

The above image is from The University of Wisconsin Space Science and engineering centre data centre web site and shows a global composite of imagery from the water vapour channel of several meteorological satellites.  Clouds are full white and other parts of the atmosphere are shown in shades of grey according to the amount of water vapour they carry (black=dry air)..  Energy for our weather comes from the sun in part by evaporating surface water.

This imagery shows how evaporated water vapour makes its way around the planet in moving rivers of air, acting as fuel lines for weather.  The red circled area above, on day 222 (10 August) shows moist air departing the Coral Sea region and heading for the Tasman Sea.  It was this water vapour that made last week’s front somewhat out of the ordinary, as picked up in MetService’s warnings. Saturday’s frontal lull 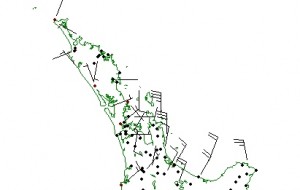 Notice that as the front crossed the Auckland region on Saturday it started to buckle and twist. This buckle seemed to start when the front encountered Coromandel.  Winds measured at noon on Saturday were gale force about Great Barrier but there was a lull in the wind just following the front in the Hauraki Gulf.

This buckle could easily have stepped back towards Auckland bringing the gales with it, so a marine wind warning was kept in force for Hauraki Gulf for that afternoon, in spite of the frontal lull.   A fleet of 137 started the Shorthanded Sailing Association’s Shorthaul and Longhaul 60 yacht race, but this frontal lull killed their wind and only 29 could finish in the allotted time.  Such is the fun we get with sailing.

This front posed several problems to people in both their work and play.  Sometimes a debrief such as this, after the event, is a useful adjunct to help our understanding of the weather.