It can be tricky here in New Zealand to fit all the weather for a day in just a few short sentences. Here are some phrases that you will often find in our forecasts and what they mean. 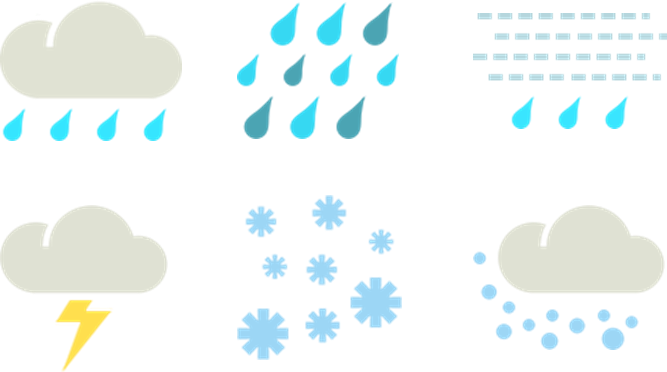 To most people, when it’s wet it’s wet, and it doesn’t make much difference whether you call it rain or showers. Forecasters use these terms to add extra information about the character of the precipitation.

Showers: Usually begin and end suddenly. Relatively short-lived, but may last half an hour. Often, but not always, separated by blue sky.

Rain: In contrast to showers, rain is steadier and normally comes with cloudy or overcast skies. Liquid water drops greater than 0.5 mm in diameter.

Drizzle: Consists of very small water droplets (less than 0.5 mm in diameter) very close to one another.

Thunderstorms: One or more convective (cumuliform) clouds in which electrical discharge can be seen as lightning and heard as thunder.

Sleet: A mixture of rain and snow.

Hail: Precipitation in the form of balls or irregular lumps of ice, usually produced by convective (cumuliform) clouds.

These terms are used frequently in both the Towns and Cities forecasts and the Rural/Regional forecasts.

Occasional/at times: Occurs less than half the time, but is recurrent.

Persistent/Continuous: Precipitation which does not cease during the forecast period.

Periods of rain: Rain is expected to fall most of the time (greater than 50%), but there will be breaks.

A few: Not many, amounting to a small number over a time period (usually associated with showers).

The odd/one or two: Even less than a few.

These terms are commonly used in our Regional/Rural forecasts, but you won’t see them used very often on our Towns and Cities pages because they apply to larger areas.

Isolated: Showers which are well separated in space (ie. covering very little of the area).

Patchy: Irregularly distributed over an area (ie. covering very little of the area).  Equivalent to isolated but usually associated with rain rather than showers.

Scattered: Irregularly distributed over an area (but more than isolated or patchy). Showers or rain which, while not widespread, can occur anywhere in an area.

Widespread: Occurring extensively throughout an area.

Fine: Weather in which the sun casts a shadow for most of the time. Rachel Kirkman wrote a blog piece about fine weather earlier this year, you can find that here.

Sunny: Any clouds that may be present are not expected to obscure the sun.

Clear skies: Implies high confidence that there will be very few (if any) clouds.

Cloudy periods/Sunny spells/Fine spells: All these phrases essentially mean the same thing; that the sun will be obscured by cloud at times during the day. The only difference is the emphasis placed on the first word of the phrase. Therefore, we usually use “cloudy periods” when there is expected to be more cloud than sun, and “fine spells” when there is expected to be more sun than cloud.

Partly cloudy: When the sky is partly covered by cloud at any given location.

Cloudy/Mostly cloudy:  Predominantly more cloud than clear sky. Cloud expected to cover approximately 70 to 100% of the sky for the majority of the day.

Overcast: Sky completely covered with cloud. Cloud expected to cover 100% of the sky for the majority of the day.

Low cloud: Stratus cloud base is expected to be lower than the tops of hills or significant landmarks (eg. Auckland’s Sky Tower 328m).

High cloud: Cirrus, cirrostratus or cirrocumulus (cloud base above 5000 metres).

Fog: Suspension of very small water droplets in the air, reducing visibility at ground level to less than a kilometre.

Mist: Similar to fog, but visibility remains more than a kilometre.

Wind: Occasionally the wind speed is the most important aspect of the weather. In these cases the wind icon is used to highlight that. Here are the various descriptions of wind that you might find in forecasts: 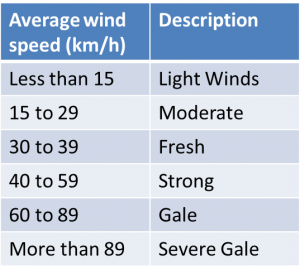