March 23rd is World Meteorological Day, a day when National Weather Services around the world commemorate the establishment of the World Meteorological Organisation (WMO), which occurred on this day in 1950. WMO is a global agency which co-ordinates meteorological and hydrological activities. Having international collaboration is very important, as weather will not stop and wait at the border between two countries! Each year there is a theme for World Meteorological Day, and for 2016 that theme was ‘Hotter, Drier, Wetter’ – a look at the variability and extremes that happen with our weather and climate.

New Zealand is no stranger to variable weather, and is often described as having ‘four seasons in one day’. While this is not exactly meteorologically accurate, it is certainly true that New Zealand tends to get large swings in temperature and rainfall. Here’s a look at some of the extremes that our country has endured over 12 months prior to March 2016, and the meteorological conditions that lead to them.

The hottest temperature New Zealand has seen in the previous year was on the 21st of December, when a scalding 36.1C was reported at Christchurch airport. This temperature set a new record for December temperatures in Christchurch. But what caused this day to be so hot? As with any extreme weather event, it was a combination of factors which caused it. Firstly, the air that resided over Christchurch originated from very far north, from much warmer, near tropical climates. A large high pressure cell to the north of the country dragged the air southwards all the way from coastal NW Australia. 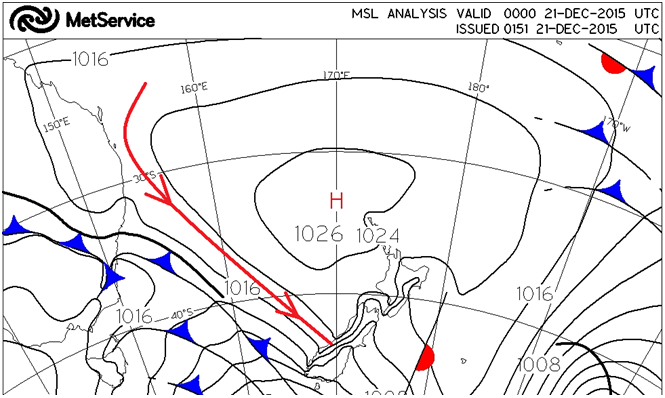 Figure 1: The red streamline shows the path the tropical air followed around the High Pressure Cell towards the Southern Alps.

Next, this warm air met the imposing Southern Alps, squeezing out all the moisture in the air as it ascended the range. This process dries and warms the air up even further, as explained in our blog about the Foehn wind. As the wind rushes down the eastern side of the mountains, it is significantly warmer than the tropical air already approaching from the west. The final part of the puzzle was a cloudless day over Canterbury allowing the sun to be out in full force, further heating up the day. You can also see a video explaining this process here.

There were a number of extremely dry months along the east coast of the South Island, but the driest month of the year was in Ranfurly, Otago, where just 2.6mm of rain fell in July.

A dry month is the culmination of many things coinciding, but one of the reasons there were several dry months this year was due to the strong El Nino weather pattern which developed in 2015. While day-to-day weather cannot be pinned on El Nino, it does mean that the long term average conditions over the country will change. In the case of El Nino, New Zealand expects an increased frequency of westerly flows over the country, meaning drier than average conditions in the east.

The wettest 24 hours were recorded at a weather station on the northern facing slopes of Mt. Taranaki. A total of 454 mm of rainfall poured down the slopes in the 24 hours to 9am on the 20th of June, 2015. To put this into perspective, Cromwell (one of the driest places in the country) only receives an average of 436 mm of rainfall in an entire year! So what caused this deluge on Mt. Taranaki?

A low pressure system in the Tasman Sea was directing a strong northwest flow over the North Island. This caused moisture-laden sub-tropical air to be dragged southwards. As the air moves further south, it cools, which makes the moisture in the air condense – a perfect recipe for lots of rain! In addition to the northwesterly airstream, a front also sat near the Taranaki region all day. While there was rain over a widespread area, the heaviest rainfall will be near the front. The heavy rainfall caused flooding in many parts of Taranaki, Wanganui and Manawatu, and some places were evacuated. 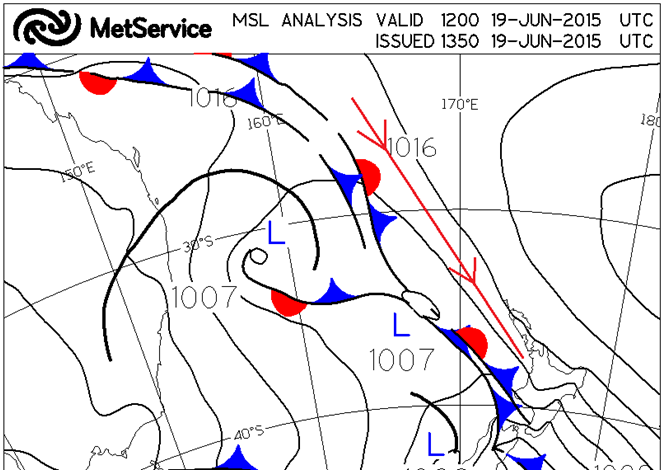 Figure 2: The red streamline shows the path the tropical air followed towards the North Island. You can also see a front sitting near Taranaki, which remained in place all day.

In the same 24 hour period, New Plymouth Airport only recorded 58.8 mm of rainfall. While this is still a lot of rainfall (and another 64.2 mm was recorded there in the next 24 hours), why was there so much more rain on the mountain? As the northwesterly winds slammed into the northern face of Mt. Taranaki, this pushed the air upwards. This process cools the air even further, meaning that even more moisture condenses out of the air, creating even heavier rainfall. This is why the wettest places on Earth are all on the windward side of mountains.

The coldest temperature recorded in New Zealand in the past year ranks amongst the ‘top’ five coldest temperatures we have on record. At 9am on the 24th of June, a weather station near Omarama, in the Mackenzie basin, clocked in at a staggering -21C. How did the conditions lead to such a bone chilling morning?

Earlier in the week a procession of cold fronts had marched up the country, each one bringing successively colder air over New Zealand. Not only did these fronts bring cold air over the country, they also left a thick blanket of snow over much of the South Island. Following the final cold front, a ridge of high pressure directed a highway of polar air straight from Antarctica towards the South Island. 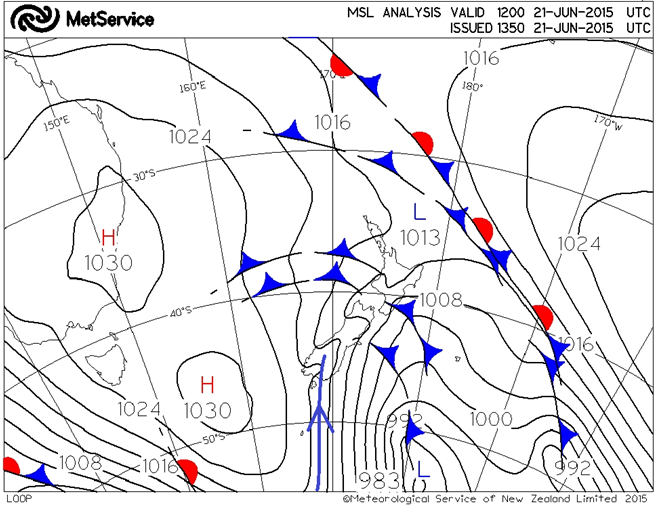 Figure 3: Pressure Map showing the 'highway' of cold air travelling from Antarctica to the South Island in June 2015.

Due to the influence of the lingering high pressure, the southerly winds eased and there were several calm and cloudless days in a row. Cloud acts like a blanket, keeping warm air in, but the cloudless sky allowed the area to get cooler and cooler over each successive night. Eventually, the temperature dropped to -21C on the 24th of June.

New Zealand’s climate varies a lot from region to region, and within each region there can be a number of micro-climates. This is largely to do with New Zealand being situated in a maritime environment combined with our high mountain ranges, and also due to our latitude in the “roaring forties”. This means that we have places that get extremely high rainfall totals each year, and other places that struggle to get enough. Many places regularly drop well below freezing in the winter, whereas people in other places may be surprised to see a light frost. The changeability of New Zealand’s weather makes it interesting and challenging for our meteorologists to forecast.