The course, which will start in 2016, will be taught by Dr James McGregor and Associate Professor James Renwick from Victoria’s School of Geography, Environment and Earth Sciences, along with four adjunct lecturers from MetService. “Victoria has always been at the forefront of meteorology study in New Zealand—we’re lucky to be just a 10 minute walk to MetService,” says Dr McGregor, the director of the meteorology programme.

He says in terms of international standing, the Master’s of Meteorology will be highly regarded, and is certainly in keeping with World Meteorological Organisation recommendations. “We’re pretty excited to be working with MetService on this. Universities are often described as ivory towers, but an industry collaboration like this has real-world relevancy,” he says.

Chris Webster, MetService’s Manager of Meteorological Capability, says he is looking forward to further collaboration with Victoria. “The Masters programme is the next step in a long and fruitful relationship between MetService and Victoria University. The programme recognises the world-class facilities and expertise that are used to educate our new professional meteorologists.” 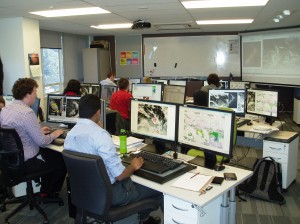 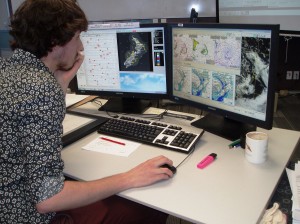 One of our 2014 graduate trainees working through a forecasting simulation.

Dr McGregor says the collaboration has been a long time in the making. “We have a relationship with MetService that dates back around 30 years. We have taught the course work—basic meteorology and theoretical work—and practical application has been done at MetService. Now we’re developing that practical work to become part of the university course structure. “It’s the logical conclusion to the decades that we’ve worked with MetService and the Memorandum of Understanding we signed with them in 1998. “It will be great for the students as it will formally recognise most of the additional work they’ve been doing at MetService and include it as part of their qualification.”

Dr McGregor says demand for weather forecasting services is higher than ever before. “Local authorities, farmers, businesses, outdoor enthusiasts and the general public are all wanting more frequent, specific and accurate forecasts. That, coupled with better measurements from satellites and weather radars and improved computer modelling, means there’s a real need for more highly skilled people to interpret the data.” [News release from Victoria University of Wellington 16 September 2014]