Addendum added on  20 Dec 2010 with images from Malcolm Potts

Lesley of New Plymouth recently sent in some cloud images taken by cellphone at New Plymouth.  They were taken at around 7:50am on Thursday 18 November 2010 and look a bit like someone or something had been slicing the clouds.  The first, below, was taken from the Waimea Street/Brois Street roundabout, looking roughly east-south-east  (to the right of the morning sun). 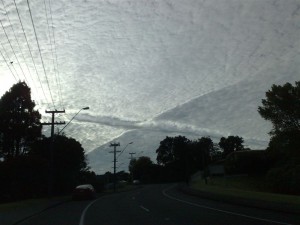 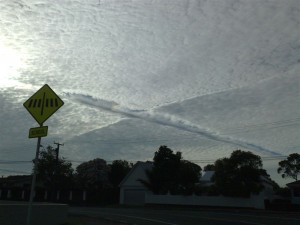 The second, above, was taken on Huatoki Street outside Vogeltown School facing in the same direction. The bearing of sunrise at New Plymouth on 18 November was 116 degrees true, and by 7:50 am the bearing was around 99 degrees, at an elevation of 20 degrees above the horizon. 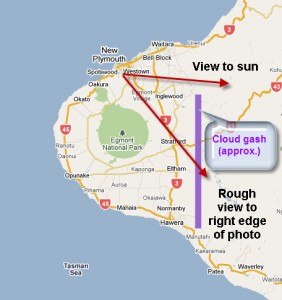 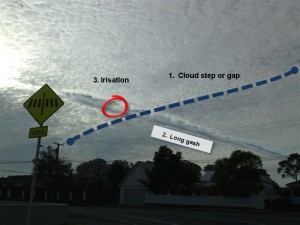 And look at the weather map and satellite image 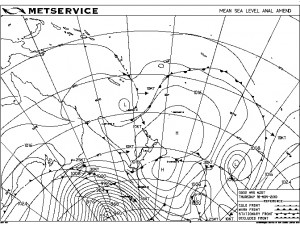 On 18 November the weather map shows that an anticyclone (or high) was departing to the east of New Zealand and a warm-frontal zone was approaching from the north.  The barometer was steady at around 1020 hPa, but the clouds above Taranaki were in a state of flux.  There was still some sinking air aloft caused by the high, but also some layers of rising moist air caused by the approaching front. One of these layers was indicated by a layer of cloud called Altocumulus (Alto=middle, Cumulus= in heaps).  This is sometimes called a mackerel sky because it looks similar to the scale patterns seen on a fish.  This cloud layer had a base that was measured by MetService at New Plymouth airport to vary between 17,000 and 21,000 feet (in aviation meteorology altitude is measured in feet and horizontal visibility is measured in metres), well above the top of Mount Taranaki (8,260 feet). The droplets in this cloud would have been formed from water vapour condensing onto small aerosols (dust or salt particles) into little liquid balls as the layer of air rose and cooled.   Even though these cloud droplets had floated higher in the sky than the freezing level, they were still liquid – such cloud droplets are given the name super-cooled. 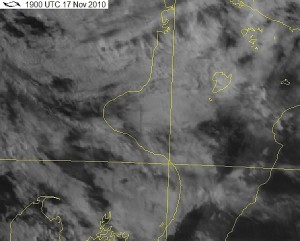 The zoom (above)  taken from the  8am image from the MTSAT  geostationary satellite shows a cloud gash orientated north/south and located east of Stratford. It also seems to show some possible steps up and down within the cloud deck, oriented east-north-east to west-south-west.

This deck of cloud has a sort of step feature or crack in it running from lower right to upper left in these photos.  These features are sometimes seen in other cloud decks at lower and higher levels - possibly due to some sort of disruption in the rising layer as the cloud forms, but there is insufficient information in this case for any useful conjectures.

The zoomed image above shows that the air is clear along this gap.   A hint of shadow seems to indicate that there may be a jump in height from left to right across this gap.

The striking gash line from left to lower right is an example of a process colloquially called a “hole punch”. To form a “hole punch”, basically, requires a disturbance such as the addition of some frozen nuclei – it could be ice or soot or something solid with a sub-zero temperature, possibly falling from a cirrus cloud higher up.   This causes the supercooled water droplets that it touches to freeze.  The frozen ice particles then grow by absorbing water vapour from the air around them.  This lowers the relative humidity of this air and increases the evaporation rate of the remaining liquid water droplets so that they dissipate as a result of a diffusion process.  The growing ice starts to fall in streaks and a hole opens up. Eventually the water vapour cannot diffuse fast enough from the edges of the hole and the process stops.  It’s a race between diffusion and gravity, and gravity wins. In this case the fall streaks encountered drier air below the original cloud and mostly evaporated, but sometimes they can form a long wispy cloud just beneath the hole. These falling and evaporating clouds are called virga. We can only guess as to the cause of the disturbance that led to this hole punch.  Since it seems to have a straight track, it could likely have been a passing aircraft.  The exhaust fumes of a jet engine wake contain water vapour, carbon dioxide, and small amounts of soot and other combustion products. Soot may have descended into the cloud and started the freezing process.  Jet engines leave a trail of frozen nuclei in their wake that, given the right conditions, can seed cloud growth and make a contrail (condensation trail), or punch a hole in a cloud and make a distrail (dissipation trail). This cloud gash matches the flight path for aircraft between Auckland and Wellington. There may have been other sources for the original freezing nuclei. Here are some local examples of clouds showing a hole punch: Colin Langley, Hauraki Gulf, Auckland Sheryl Logan, Maungaturoto, Northland Ron Ovenden, Whatawhata Dave Swarbrick, Auckland And here are some links from Wired Science and NASA explaining the processes involved 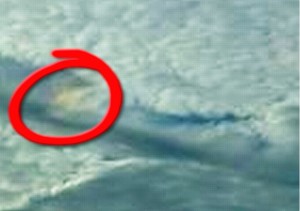 The above zoomed image has been highlighted to show a coloured spot in the image taken from Huatoki Street. This is likely to be iridescence (sometimes called irisation), with sun side-lighting a thin cloud and producing a coloured pattern similar to that seen in soap bubbles. The likely process here is called diffraction (click here for more information). The simple way of explaining diffraction is to say that light is bent as it passes around the thin sharp edge of an object, and some wavelengths or colours are bent by different amounts, so that sunlight is turned into a rainbow of colour.  The cloud needs to be thin and all the droplets need to be all of similar size and stay coherent.  This occurs in newly formed clouds, especially in mountain wave clouds (altocumulus lenticularis), cumulus clouds, and in contrails.   Iridescence occurs best when viewed at only a small angle from the sun, with the sun low in the sky and covered. Mathematically, diffraction is best described as being an interference pattern, where different streams of light get superimposed and combine like waves, adding here and cancelling there.

Our thanks to Lesley for sharing this weird and wonderful cloud image with us.  It helps to highlight some of the natural (and man-made) effects that occur around us.  It also gives us an opportunity to share our current understanding of the physical processes at work. Taranaki, with its conical mountain, is a great place for looking for weird clouds. So keep that camera ready! Addendum Malcolm Potts has sent in some more images of this weird cloud,  capturing more of the striking iridescence. He has permitted these to be added to this blog. Thanks Malcolm : 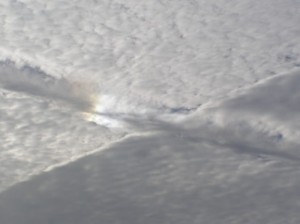 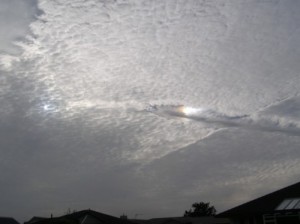