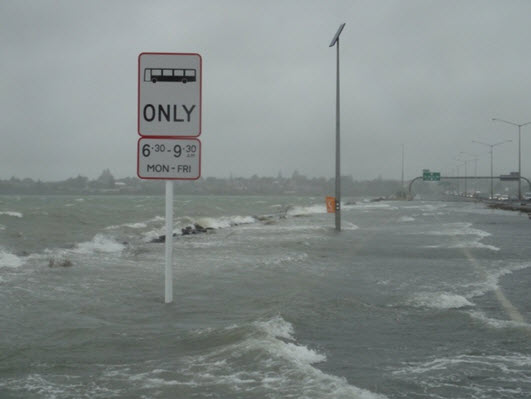 This was a case of storm surge associated with a passing low pressure system. The system formed in the tropics around New Caledonia, but left the tropics before it had time to deepen into a tropical cyclone.

Weather map for noon on Sunday 23 January 2011. The region marked DQ is explained in the text below. 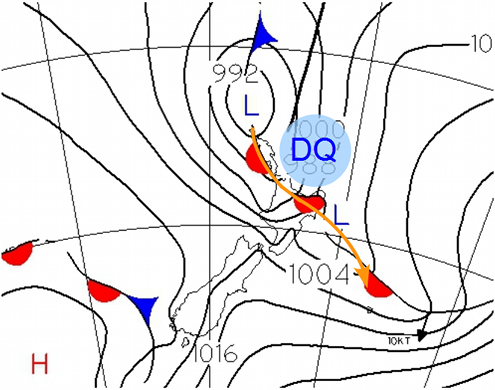 Storm surge is the name given to the situation when the sea floods inland along the coast.
It has three components.
1. Wind setup.  When strong winds blow from the sea to the land (“onshore”), a wind setup is formed: under some circumstances, the sea is pushed onto the land faster than it can drain away, and waves penetrate beyond the high water mark.
Wind setup depends on the size and shape of the strongest wind zone and the land it encounters. It is accentuated in shallow basins such as the Firth of Thames. Strong winds are often associated with low pressure systems. Storm movement – that is, the movement of the low pressure system itself – influences the wind strength.

In the Southern Hemisphere, where the wind flow around a low is clockwise, storm movement adds to wind strength on the left side of the storm track.  For a low travelling southwards, this means that winds are stronger in its eastern semicircle.  This is why many sailors call this the dangerous semicircle and its front-left quadrant the dangerous quadrant.
On 23 January, when the low on the weather map above approached Northland, its dangerous quadrant (labelled DQ on the map above) brought the most pronounced onshore winds and highest wind setup to the Coromandel - Bay of Plenty area. NIWA measured storm surges of 370 mm around Coromandel and 590 mm at Moturiki Island near Tauranga.

2. Low air pressure. The inverse-barometer effect occurs whenever air pressure over the ocean differs from normal. Each hectoPascal of air pressure below the norm (of 1013 hPa) may raise the sea level by ten millimetres. So, a large low pressure system is accompanied by a dome of elevated  sea surface. On 23 January, when the pressure dropped to 986 hPa around Auckland, the maximum inverse barometer effect was around 270mm.

3.  The tide comes and goes around once every 12 hours 20 minutes. The tidal range – that is, the difference in height between low and high tide - is largest a few days after the moon reaches its perigee (closest point of its orbit to earth) within a day or so of reaching a full or new phase. This happens only a few times per year,  and is sometimes called a King tide. Auckland has a reasonably large tidal range of around 3 m.
On 23 January the high tide height was 3.5m - only about 100mm lower than a King tide. Strong onshore winds from the tropics often produce heavy rain on any hills and ranges. If this drains off quickly (as is usually the case in New Zealand) and arrives at the coast at the same time as a high tide,  the chances of flooding near river mouths and estuaries is increased.

Auckland’s tide gauge showed a peak of 4.129m between 11am and noon on 23 Jan 2011.  Data are courtesy of Ports of Auckland. When Tropical cyclone Yasi made landfall onto Queensland,  Townsville (with a two-metre tidal range) was in the dangerous quadrant.  Yasi’s two-metre storm surge arrived on the outgoing tide, reducing its impact.  The highest-ever  measured storm surge was 8.5 metres at St Louis Bay in Hurricane Katrina (2005).

The worst storm surge, in terms of loss of life, was the Bhola cyclone which hit East Pakistan (now Bangladesh) on 12 Nov 1970, here an estimated 500,000 people perished. The online nautical almanac published by Land Information New Zealand explains more about how tidal predictions only give the astronomical component,  and how strong meteorological effects need to be taken into account.

During a period of King tides, if there is an anticyclone around or strong offshore winds, extra care is needed around rocks, reefs and sandbars, as the actual water level may drop to near or below chart datum - which is the level that charted depths displayed on a nautical chart are measured from.  Each nautical chart carries a note defining its chart datum and most New Zealand nautical charts use the lowest astronomical tide computed over the period of one entire SAROS cycle.