When I was biking to work in Auckland  last Friday I noticed prolific amounts of pine pollen in the puddles around Westhaven. 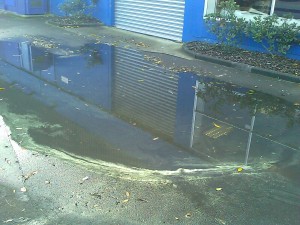 This was probably blown here from the pine trees of Riverhead forest during that northwesterly gale we had the previous night.  That was a vigorous cold front -- producing wind gusts to 120 km/h, and a period of heavy rain which produced flash flooding in Greymouth,  and slips in Wellington enough to stop the train to Masterton.

The graphs below show the wind from Mount Kaukau NZKKW and the peak of the Rimutuka Road NZRIX  as well as Manukau Heads on Auckland’s West Coast NZMKW. ff  =average speed,  fm= gust speeds. 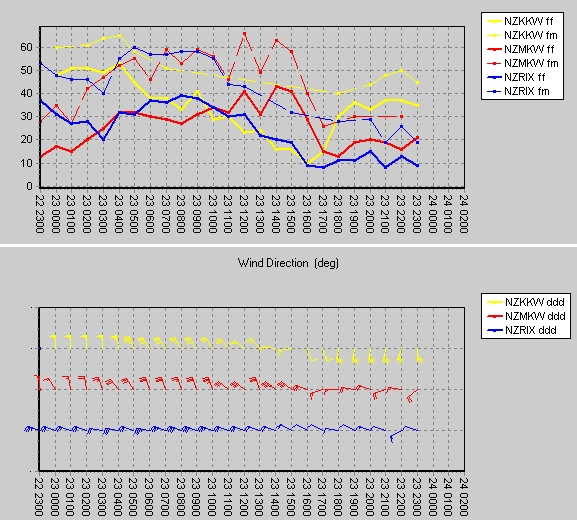 The top graph shows the average winds ff (no more than gale force) and the gusts fm. Timestamps are in UTC, so 23 0000 is noon Thursday and 24 0000 is noon Friday local time.

THE GUSTS ARE USUALLY 50% STRONGER THAN THE AVERAGE SPEED

Weather forecasts usually just mention the average winds, but also mention the gusts when they become significant.   Our Severe Weather Warnings for strong wind give the gust speeds expected.  From these people can judge the likelihood of damage by using our wind poster.  In this graph wind speed is in knots.  Multiply by 1.85 to get km/h -- the top gusts plotted here are 65 knots at Kaukau and 66 knots at Manukau heads (around 120 km/h).  Yes, it was windier (just) over the hills of Auckland than it was in Wellington.

The bottom graph shows wind direction, with wind blowing from feathered to pointed end, each barb worth ten knots, north up and south down.   I’ve included it so we can see the wind swing as the cold front moved across the North Island, most noticeable at Mount Kaukau which shows the southerly gale going through Cook Strait on Friday. Rimutuka Hill road is farther north and, during Friday morning, slightly to one side of this Cook Strait southerly.

Usually I notice “pollen in the puddle” around the start of August, so this year it seems to be around a week earlier than normal.  While it is another sign that spring is coming, it can not be taken as a sign that winter is over.

As an old saying puts it, describing the weather at this time of year:  "As the days get longer, the cold gets stronger".