It must have been an insightful man who decided to build the new meteorological office on the end of the ridge above the Botanical Gardens. If you are lucky you can observe some beautiful meteorology from the roof of the building. The Director at the time, Dr John Gabities, probably had a big say in the matter. Being a meteorologist himself, he would have appreciated the value of that siting.  At lunch time on Friday (22 January 2010), I was on the roof and noticed a little drama unfolding on the harbour and took a photo with my cell phone. The photo was taken a few minutes after the scene was at its best, and the framing is not what I had hoped. However, it shows enough to share. 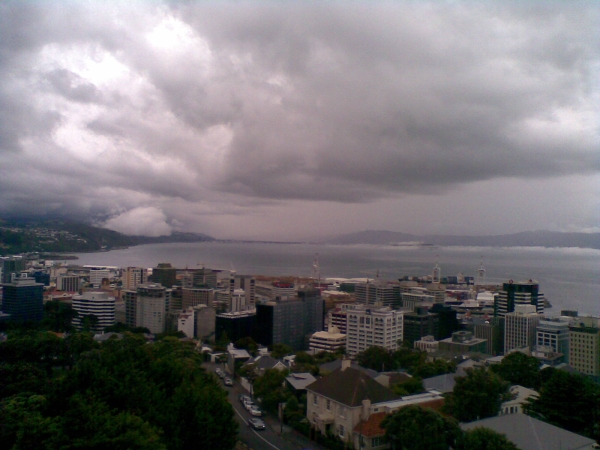 Looking northeast from the roof of the Meteorological Office, Wellington. Thorndon and the container teminal are in the middle foreground. SH2 runs north along the left (west) side of the harbour. My small bright cloud is the one partially obscuring the hills in the middle-left of the photo. Petone and Lower Hutt are obscured by light rain in the middle-centre of the photo. Matiu/Somes Island is the dark line above the container ship just right of middle-centre. Eastbourne is on the right (east) side of the harbour.

There was a light drift of wind over most of the harbour - the Oriental Bay fountain indicated that it was northerly there; the anemometer vane at Kelburn here showed a light westerly; but aircraft were landing at the airport towards the south, so it was southerly there.

It was certainly southerly in the harbour entrance because there was a finger of very low stratus or fog extending from between Pt Halswell and Eastbourne towards Matiu/Somes Island in the developing southerly change. This can be seen in the photo, although Point Halswell is just out of frame to the right. The finger of cloud and fog had not extended much past Matiu/Somes, but look on the escarpment above SH2 near Newlands! The narrow finger of moist southerly air was being forced upslope and was condensing to form a bright, dense little cloud with a base of no more than about 60 metres. When I took the photo, a small cloud had also formed over Matiu/Somes Island by the same mechanism.  Not long later, only a few minutes, the stream of cloud/fog emerging from the harbour entrance was dissipating. The cloud over Newlands was growing bigger, and the top was being caught in the northerlies above it, and pushed southwards out over the harbour again.  Ten minutes later it was over - the finger of fog and low cloud, and the Newlands cloud had evaporated; gone. The northern and eastern parts of the harbour were being overtaken by light rain and lowering stratus from the body of the southerly air stream.  The whole thing lasted no more than 15 minutes. I feel privileged and humbled to have seen such a wonderful little meteorological drama.