MetService weather forecasters naturally spend a lot of time looking at satellite imagery and every so often are treated to some fascinating cloud patterns in the airflows around New Zealand. One pattern I've always liked seeing is the Kármán Vortex street, most frequently observed near our shores to the west of the North Island, generated by Mt Taranaki in a south to southeast flow. Put simply, a Kármán Vortex street is a series of vortices (or eddies) generated in the flow past an obstacle. When wind, cloud and stability conditions combine "just right" over the west of the North Island, the result can be a spiral pattern in the cloud moving away from Mt Taranaki. On Sunday, 21 June 2009 we saw an example of this: 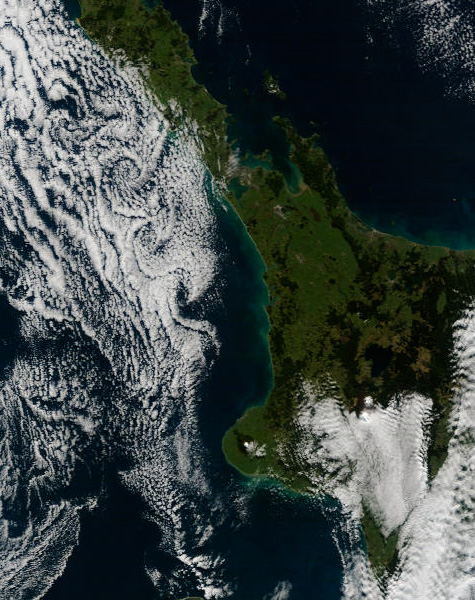 For more information about Kármán Vortices, head over to this Wikipedia page where you'll also find this nice little animation demonstrating the phenomenon:

Note in the animation above that successive vortices are spun off each side of the obstacle and then move downstream in the flow (left to right in this case).
To help visualise the large scale weather pattern yesterday, here's the analysis map from midday showing a high southwest of the South Island and a generally southerly flow over the country:

And to dive further into the situation, here's a "QuikSCAT" image from earlier that morning showing wind barbs over the ocean - depicting the strength (in knots) and direction of the sea-surface winds downstream (north and northwest) of Mt Taranaki: 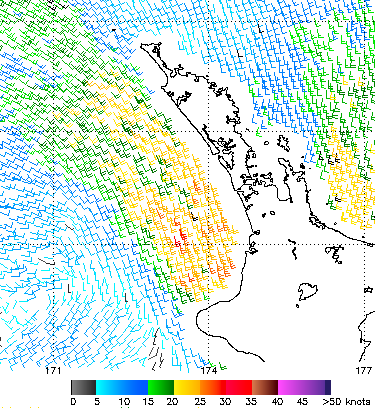 While these winds were measured around two hours before the satellite image the situation didn't change much so will be representative of the low level wind flow resulting in the Kármán Vortex street. In this case the surface wind downstream of Mt Taranaki was south-southeast at around 20 to 25 knots. For some more dramatic examples of cloud vortices, head over to the MODIS Rapid Response System website where their handpicked gallery features a number of vortex images.