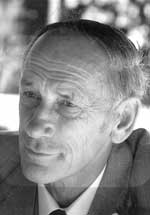 Friday 19 December 2014 sees us gather to farewell John Hickman QSO, Director of the New Zealand Meteorological Service from 1977 to his retirement in 1988. John passed away on 13 December aged 87, after a life of significant contribution to New Zealand's weather knowledge and progress. Our thoughts are with his family at this time, and our many fond memories of his time with us are being shared today here at MetService. During his 12 years as Director, John revolutionised meteorological practice in New Zealand. He obtained the first computer to be used for operational numerical weather prediction (NWP) and the first high-resolution meteorological satellite receiving station, resulting in a dramatic improvement in the quality and the quantity of the information provided to the public, as well as to international users. As a result of his work in the field of meteorological research, the Meteorological Service achieved international recognition, attracting visits from many of the world’s leading meteorologists. John demonstrated immense practical skills and foresight and power of strategic judgement during his association with the Service; these qualities were highly appreciated in international scientific circles. As president of WMO Region Association V (South Pacific), as a member of the WMO Executive Council and as chairman of several of its subcommittees and working groups, John made important contributions to science on the international level. His retirement did not interrupt his work: in 1989, he was invited to participate in preparing WMO’s Long-term Plan. He was invited to join, in a personal capacity, the tripartite intergovernmental Programme on Climate Change involving New Zealand, Australia and the United Kingdom, and he chaired the Climate Committee of the Royal Society of New Zealand. John was a vigorous promoter of closer links between the Meteorological Service and the university. He strengthened and widened contact with the academic community and strongly supported meteorology as an academic discipline in the Victoria University of Wellington. Close research links, the renewal of a senior lectureship and a fellowship in meteorology were fruits of these efforts. John showed great interest in the protection of the atmospheric environment and ensured better national organization of, and support for, monitoring programmes for ozone and greenhouse gases. In 1989, he was made a Companion of the Queen’s Service Order (QSO) for public services; in 1990, he was awarded an honorary D.Sc. by Victoria University, Wellington, and the Commemoration Medal for services in the field of science. In 1998, he was made an honorary member of the Meteorological Society of New Zealand. In 1997, John had heart surgery and withdrew from regular involvement in committee and similar work but maintained a close interest in the work of the Meteorological and Royal Societies of New Zealand and, from time to time, contributed to discussion documents and submissions on matters concerning atmospheric science. From an article first published in the WMO Bulletin 32 (4): http://www.wmo.int/pages/publications/bulletin_en/interviews/hickman_en.html