As the cicada season moves out and the mushroom season moves in, people have been commenting on the high humidity we had in February.  This is no great surprise: the sea-surface temperature of the seas around New Zealand reach their annual peak in late February/early March, and the sea is the source for most of the water vapour in our air 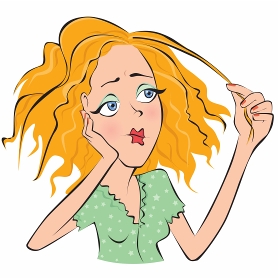 When relative humidity (RH) is high, human hair absorbs moisture from the air and creeps or expands.  Curly air frizzes and straight hair goes limp.  From dry to saturated, hair length can change by three percent.  In 1783, Swiss physicist and geologist, Horace Bénédict de Saussure used this principle to build the first humidity meter or hygrometer. These instruments, measuring relative humidity, became very popular. They were often in the form of a  Swiss or German weather house in which a lass dressed in light clothes would come out in dry weather, and a lad dressed in wet-weather clothes would come out in damp weather.  Because hair responds to relative humidity, these hygrometers helped to popularise RH as the main  measure of humidity. 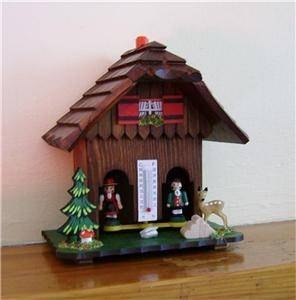 Relative humidity measures how close the air is to being saturated with water vapour, where 100% means fully saturated.  However, the word saturation here can be misleading. It is a misconception is say that air “holds” or dissolves water vapour or that saturation is reached when the air can “hold” no more water vapour.  There is always plenty of space between the air molecules for more water vapour molecules, and the saturation point, in fact, refers to a sustainable equilibrium.

Think in terms of energy. Temperature measures the kinetic energy of a material, or how fast its molecules are vibrating.   In a pool of liquid water any molecules that are vibrating fast enough (as determined by the water temperature) will break free or evaporate and become water vapour, taking with them that extra kinetic energy  -- so when sweat evaporates from skin, or saliva evaporates from a panting dog,  it helps cool things down.

Water vapour molecules that are moving slow enough (as determined by air temperature) will plunge back into water liquid, transferring energy to the molecules near where they hit and joining the liquid --- this is called condensation, and it’s a process that helps warm solids and liquids. Here’s an experiment to show condensation and its warming impact:

When the air is “saturated” and RH is 100%, the rate of evaporation equals the rate of condensation, so the amount of water vapour in the air maintains equilibrium.    This amount varies exponentially with the temperature.

“Muggy weather” is a term we use for a hot day when the humidity in the air becomes uncomfortable.  On a hot day we sweat and thus keep our cool by evaporative cooling, but if the amount of humidity is high enough to disrupt this cooling then we feel hot and sticky, tired out.  Cold air (as at dawn in winter) can have 100% RH and be foggy but since it isn’t warm enough to raise a sweat it will not feel muggy at all.  So RH is not a measure of  mugginess. 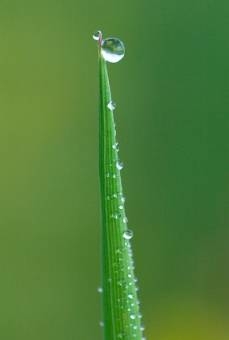 Dew point depends on the region that the air reaching us comes from, and thus mainly changes only when the wind changes.

The following graphs of temperature, relative humidity, and dew point during February 2010 around the country show what made late summer so frizzy.  It was a month when anticyclones lingered around southern Tasman Sea and central New Zealand, causing sunny warmer and drier than normal conditions. Between these high-pressure systems some passing troughs brought brief periods of rain, most notably the active front over Southern Alps on 13 February which caused the abandonment of the mountain run and kayak leg in this year’s Coast to Coast. 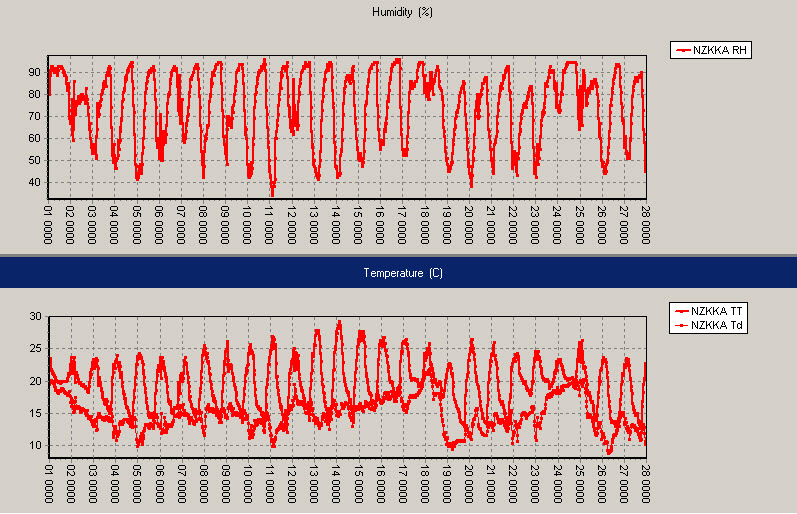 The above trace is taken at Kerikeri and shows the warmest day to be 29ºC on 14 February.  After that there was an extended period of northerly winds which raised the dew point to 20ºC.  A southerly change on Friday 19 February helped to drop the humidity for a few days and then a further period of northerly winds raised it back to 20ºC on 24 and 25 February.  Note the “flat-lining” of the RH trace at 100% on 24 February. 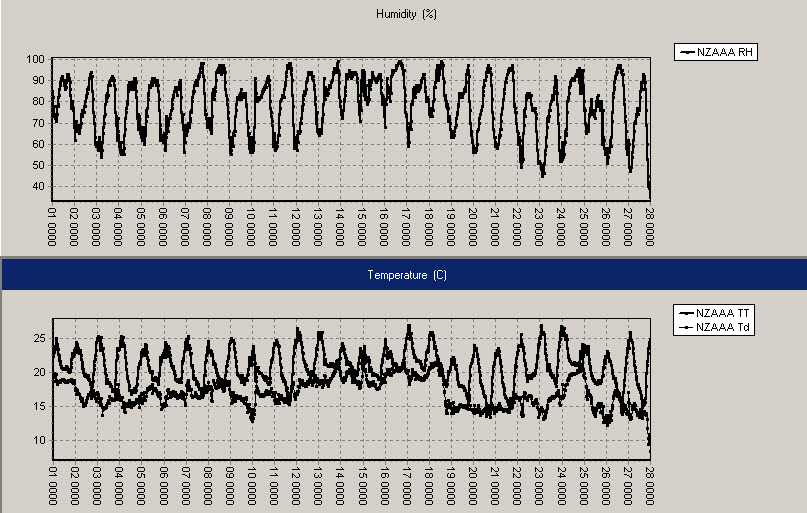 In Auckland the trace is similar to that at Kerikeri, but the warmest days were only near 27ºC, and there was nearly a week of “twenty degree nights” and dew points above 18 ºC from 14 to 19 February and again on 25 February. 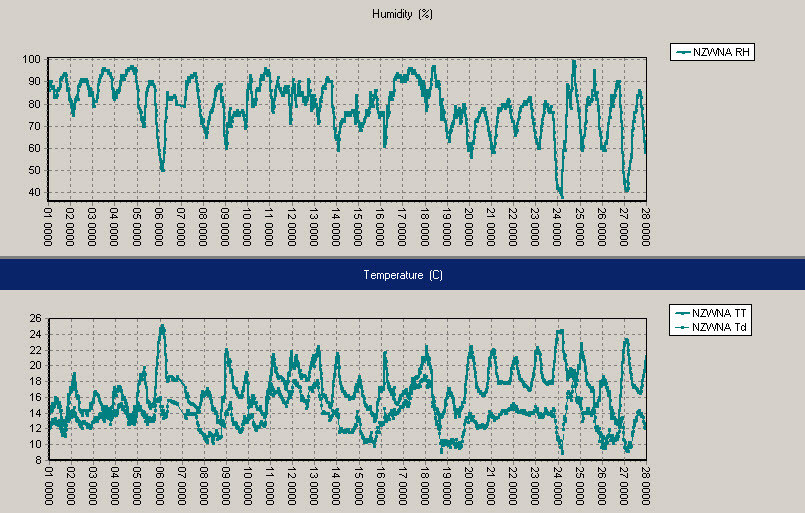 In Wellington, February’s humidity was not as extreme as in Auckland or Northland.  The warmest day was 27ºC on 6 February, and the warmest nights were 18ºC on 13 and 24 February. 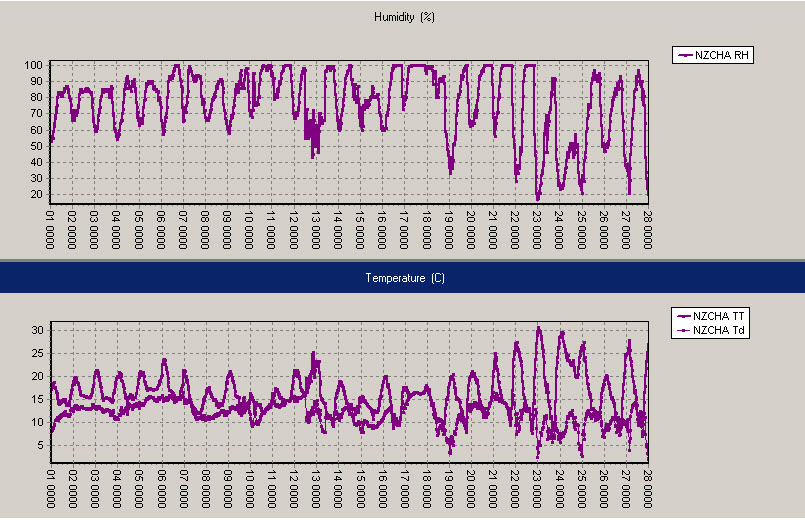 In Christchurch, the relative humidity was regularly “flat-lining” at 100% in the last half of the month.  On 23 February the wind came from the northwest, the temperature shot up to nearly 31ºC, and the dew point dropped to around 3ºC, producing a very low RH of 17 per cent. Dew point readings from selected stations are given in the coded observations page on metservice.com (in the 4 group: a number such as 40117 means the dew point is 11.7ºC).  Relative humidity readings are shown on our National page (see below).  MetService’s “feels like” temperature applies to people in the shade and takes into account wind chill when the air temperature is 10ºC, or, when it is above 14ºC, calculates the apparent temperature that accounts for any high humidity, as seen below.  For air temperatures between 10ºand 14ºC there is a roll over from wind chill to apparent temperature. 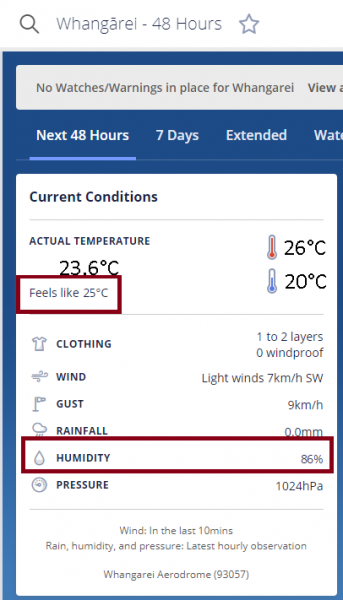 Example of humidity and apparent "feels like" readings at metservice.com