This short article is in response to an emailed complaint about temperatures displayed on the Christchurch Towns & Cities page on Thursday evening, 24 May 2012.

Attached is a screenshot image of your map this evening taken at 10.20pm .... I have just been outside and I can tell you for sure that the eastern suburbs are not currently at 12.7 degrees. More like around 6 degrees! Also I am certain that the port hills suburbs are not currently sitting at 17.9 degrees as I doubt anywhere in Canterbury reached that temperature today at all! 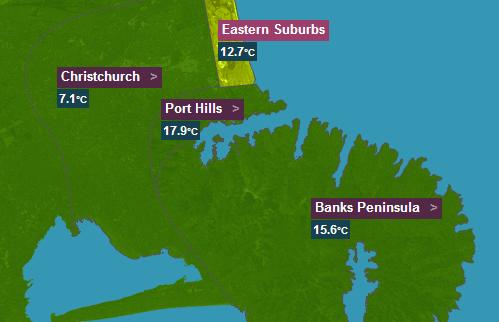 Please please get on top of this or at least put it back to just a temperature for Christchurch if you are unable to give us accurate readings and forecasts for the suburbs! 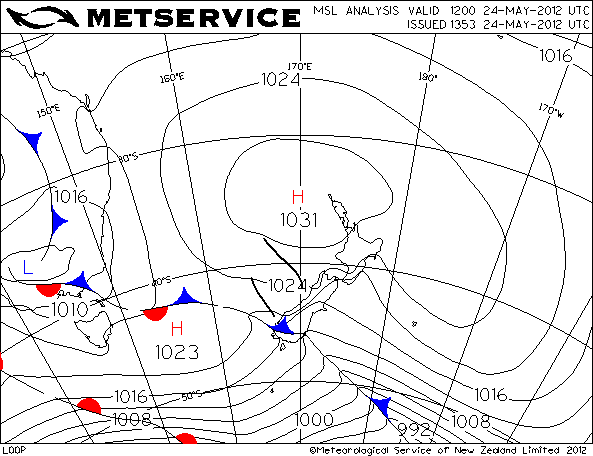 This is the analysis chart for midnight 24/25 May 2012. It shows a strong northwest airstream across the South Island ahead of a cold front advancing from the southwest. It shows two troughs east of the South Island which were producing rain on the West Coast.

This is a very good example of a “Foehn wind” situation. A Foehn wind is a hot and dry wind in the lee of a mountain range. The air is warmed by the latent heat given up by the condensing water vapour on the upwind side of the mountains. The condensed water falls there as rain and is no longer available to re-evaporate and potentially cool the air again as it descends on the lee side. Sometimes in Canterbury, this warm descending northwesterly wind flow is unable to displace the cool low-level northeasterlies which often precede a cold front. Higher locations like Sugar Loaf and Le Bons Bay are the first to show these higher temperatures as they protrude up into that wind flow.

There are certain geographical situations that will direct these warmer wind flows down to altitudes lower than would otherwise occur. One such location is the Port Hills – the wind flow “sticks” to the lee side and warmer temperatures (and strong northwesterlies) are experienced there.

Observations evening and overnight 24 May 2012

The “Eastern Suburbs” observations are taken from the New Brighton Pier automatic weather station. This graph is a plot of wind direction, wind speed and air temperature from that station between 8pm on 24 May and 8am 25 May 2012.

In the evening of the 24th the wind speed is fairly light, less than 10 km/h, and the direction is variable – sometimes from the west or northwest but mostly from the southeast. At 10:20pm the temperature was 12.6° and the wind was blowing from the southeast at 6.1 km/h.

The “Port Hills” observations are taken from the Lyttelton Pier automatic weather station located at the Port. This graph is a plot of the same elements over the same period.

It shows a period between about 9pm and 1:30am when there was moderate to fresh northwesterlies. During that period the temperature had warmed from about 9° to 16-18° then lowering to 12-15° when the direction changed to northeast. This is clearly a Foehn wind.

The Foehn wind can also be seen in the data from Sugar Loaf: 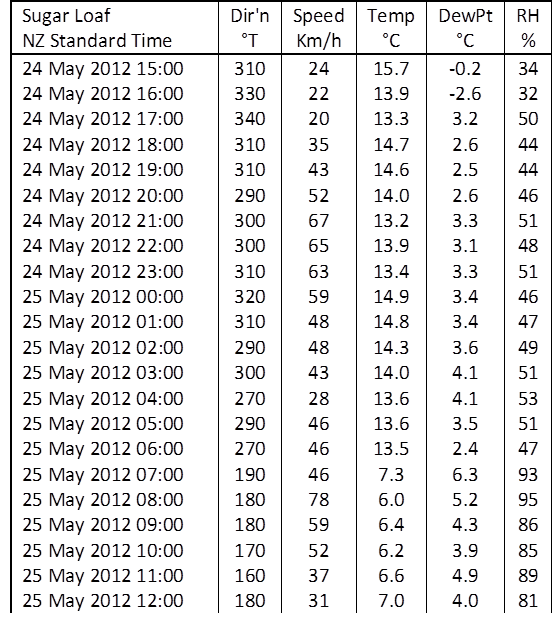 With the strong northwesterlies, the temperature is 14-15° with low dew point and Relative Humidity – a typical Foehn wind. Note how the temperature fell dramatically as the wind direction changed to southerly.

The Foehn wind is also observed at Le Bons Bay: 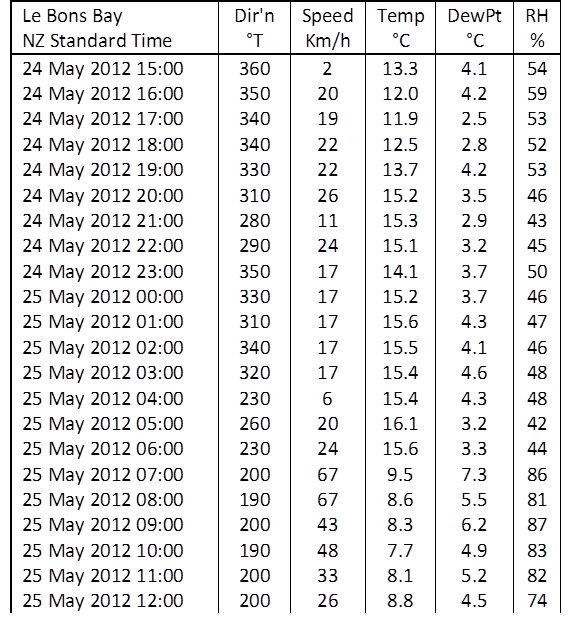 At Christchurch Airport, the Foehn wind lowered to ground level only briefly, between 4am and 6am. 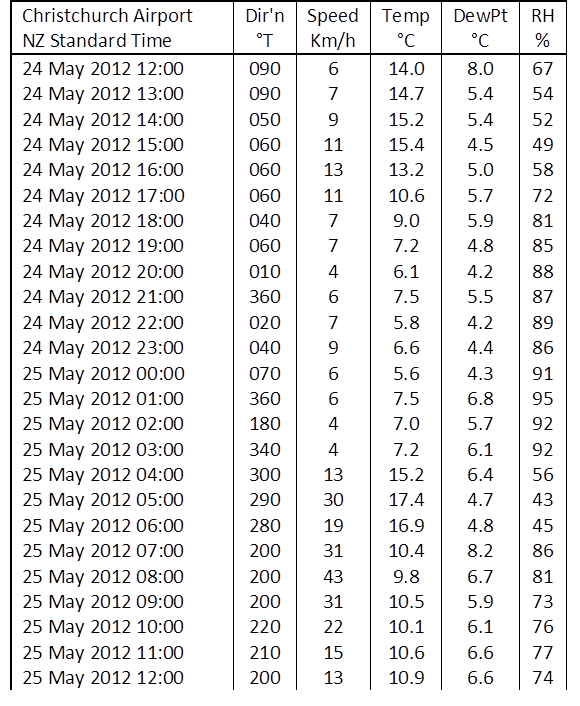 It appears to me that, apart from the Foehn wind flowing well above Christchurch (to be detected by the higher AWS sensors of Sugar Loaf and Le Bons Bay, and by Lyttelton in the down-slope wind there), there was a further complication, in that air from the northeast and east was warmer by a few degrees than air flowing from the north.

I suspect that our email correspondent’s place is located in that northerly flow and it was that colder air stream that he experienced, rather than the warmer northeasterly airstream that was affecting the New Brighton Pier AWS.

Considering the larger meteorological situation on the evening of 24 May 2012, and the common behaviour of the Foehn wind (Canterbury Nor’wester) it seems to me that the weather stations around Christchurch were illustrating correctly the wind flows that were present and where their effects were being experienced.